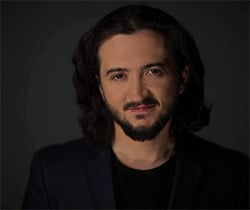 The show has also won a 2016 Telly Award for their live stand-up comedy special in New York City. George Carlin’s daughter Kelly said Camp was one of only a handful keeping her father’s torch lit. Camp is a former writer for The Onion and for Huffington Post Comedy.

He created and starred in the viral YouTube show Moment of Clarity that was seen by millions, and he’s performed stand-up comedy in a dozen countries and every state in the US. He has also been featured on Comedy Central, NBC, CNN, MSNBC, MTV, FOX & Showtime. Many know him from the viral clip of him on Fox News calling a “parade of propaganda and a festival of ignorance.”