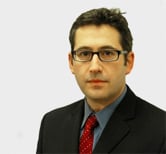 Sam Seder is a New York based political talk show host. Seder’s daily podcast, The Majority Report, has been voted Podcastawards.com best News/Politics podcast for four years running. It airs live at www.majority.fm. Seder is an MSNBC contributor and has appeared regularly on nearly every major cable news outlet.

Seder is a former Air America Radio host,  including co-hosting The Majority Report with Janeane Garofalo, and the web only, video show, Break Room Live with Marc Maron. Seder also served as the Editor in Chief of AirAmerica.com.