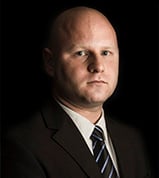 Farron Cousins is the executive editor of The Trial Lawyer magazine and a contributing writer at DeSmogBlog.com. He also hosts the weekly DeSmogCAST and serves as co-host for Ring of Fire on Free Speech TV. His writings have appeared on Alternet, Truthout, and The Huffington Post.

Farron received his bachelor’s degree in Political Science from the University of West Florida in 2005 and became a member of American MENSA in 2009.