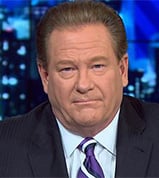 Why is the Ed Schultz Show hotter than a polar bear in Pensacola? Easy. Because Ed Schultz is so different from every other talk show host. He’s a straight-talking, no-nonsense voice of reason in unreasonable times.

Ed has spoken at numerous caucus meetings on Capitol Hill and is one of the most consistent voices for working class Americans. Ed has been the keynote speaker at union conventions all across the country.

A veteran of 30 years in broadcasting, Ed has covered some of the biggest events in American history. His gripping live network reports from Capitol Hill in Washington D.C. during the attacks of September 11, 2001 are the stuff of legend. Displaying quick thinking, composure and heart, Ed captured the moment through the voices of the biggest political names of the day on the spot and in the moment. Ed also took his show to Gulf Port, Mississippi in the wake of Hurricane Katrina, leading a personal effort to make a difference. He is one of the few broadcasters in the country ever to do a show from Cuba.

Ed has won three Eric Sevareid Awards and has managed and been lead talent for a broadcast team that has won two Marconis and a prestigious Peabody Award. Ed has been named one of the top ten radio hosts in the country by Talkers Magazine for a number of years. He has been a nominee by Syndicated News/Talk Personality of the year by Radio & Records.

Ed’s book, “Straight Talk from the Heartland,” laid a roadmap for the Progressive wave that’s sweeping America. Penned in 2004 as if he had a crystal ball, Ed’s words have been proven wise and his predictions uncanny. His latest book is “Killer Politics: How Big Money and Bad Politics Are Destroying the Great American Middle Class.”

Ed is a graduate of Minnesota State University Moorhead. His competitive nature helped him lead the nation in passing & achieve All-American status as a quarterback at MSUM. His son Dave Schultz is a professional golfer on the PGA Nationwide tour. A devoted family man, Ed and his wife Wendy have six children. He shares his passion for hunting, fishing and flying with his large family.