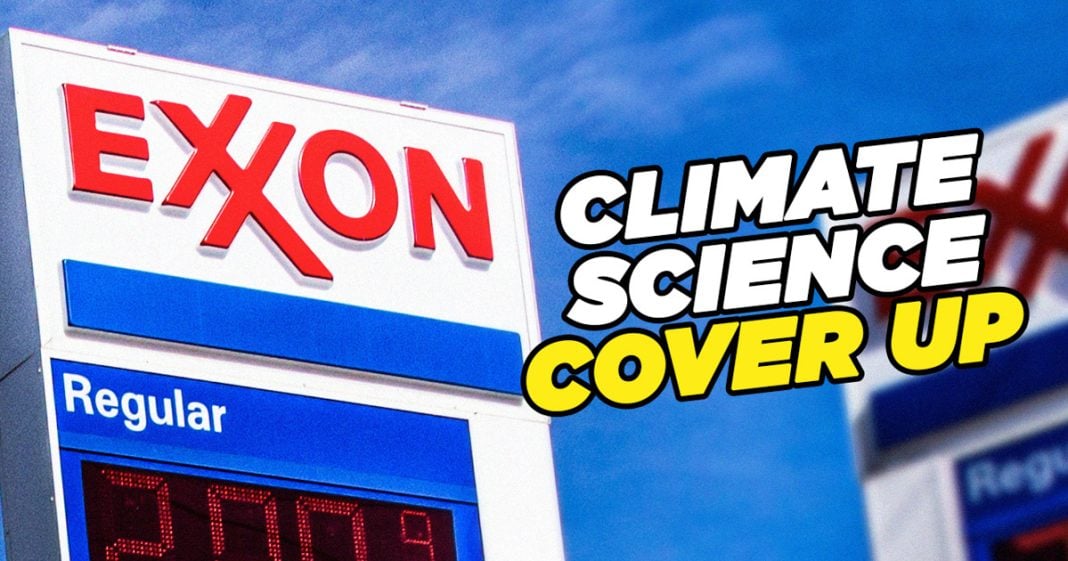 Mike Papantonio: Exxon’s internal documents are being made public showing how the company spent 50 years lying about climate change. You know, I, I say this to you. I, I say this often and I really mean this. I really do believe, I, I’ve told you this to your face, I tell everybody, I think you’re the best progressive commentator in the business. I, I sincerely mean that. Okay. Not just because I’ve worked with you for 20 years. I believe you’re the best. You have covered this story better than anybody I know. Why don’t you take this story?

Farron Cousins: What, what’s happened now is we’ve got a whole new treasure trove of Exxon documents that have been digitized and provided online for the first time. So you’ve got researchers that are finally digging into this. And what they found was that in the 1970s, mid 1970s, the best climate change research linking fossil fuels to global warming was coming out of Exxon itself. But of course, they knew that uh-oh we’re, we’re about to show the world that we did this, we’re doing this. So they buried it and instead did the exact opposite. They put all of their resources into convincing the public that climate change wasn’t real. That we’re in a period of global cooling. Funding all of these think tanks that soon, you know, grew into these behemoths in DC, they still are. All because they found out the truth and they couldn’t let anybody know about it. But their research was even better than the scientists and what Congress had at the time.

Mike Papantonio: Will anybody watch this segment that we’re doing here right now?

Mike Papantonio: What, what.

Mike Papantonio: What happens when we do a climate change segment?

Farron Cousins: It, it is a traffic killer.

Mike Papantonio: It, it.

Mike Papantonio: It will destroy traffic. People don’t want to hear it. They don’t wanna talk about it. Why is that? Does it scare ’em? Is it they feel like they can’t do anything? Why is it that when you and I, I always go to you on climate change, I think you’re just the guy to be talking. Why is it that it shuts down traffic?

Farron Cousins: I, I, I really can’t figure it out. I mean, it’s obviously a hugely important issue to the future of the planet and, and people themselves. But they just don’t want to think that one, that they can do anything about it. So I’m not gonna look at it. We’re screwed either way. Or the people who think, you know what, it’s probably not as bad as all of the science tells us it’s gonna be. So I’m not gonna pay attention.

Mike Papantonio: Or you know what, we don’t believe the media.

Mike Papantonio: That’s a big part of it.