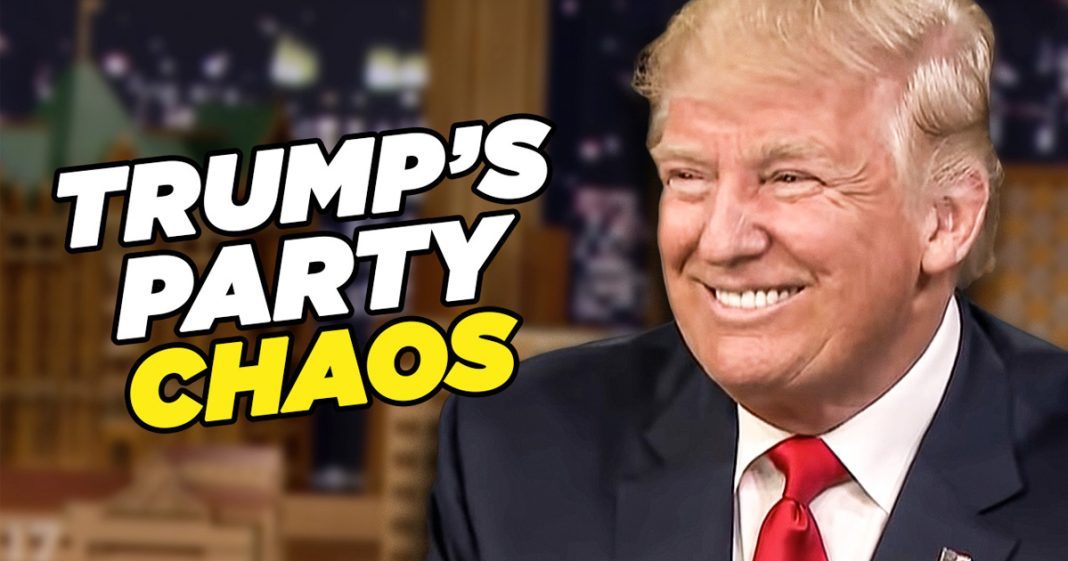 Donald Trump is weaker than ever, and that might work AGAINST Democrats in the next election. Mike Papantonio & Farron Cousins discuss more.

Mike Papantonio: Donald Trump is weaker than ever and that might work against the Democrats in the next election. This is well done. This story to me, Brookings Institute, which of course is, typically aren’t they kind of right wing? I mean they.

Farron Cousins: They, they got a lot of liberal stuff that comes out of ’em.

Mike Papantonio: They, they swing both ways.

Farron Cousins: Militant I think is a good word too.

Mike Papantonio: Mil, yeah, militant. Very militant. No, I think it’s a good thing. Their take on this was interesting. Trump is a gift to the Democrats. He’s a gift because he sucks up all the attention. He, he’s the guy who’s the whipping boy. Democrat can go on the air, they can talk about Trump all day long and everybody ignores what’s going on with the Democrats. Second thing is, according to this, it prevents there being any normalcy. He prevents any normalcy returning to the Republican party. Okay. Pick it up from there if you would.

Farron Cousins: Yeah. It’s, it’s nothing but chaos with Donald Trump and chaos in a Republican party benefits the Democrats. Because they get to sit there and point out, look at how dysfunctional they are. Look at the crazy thing this man said on Twitter. Look at what he’s posting over here. He did a ridiculous interview because he’s crazy. And that of course, as you said, helps Democrats. The people Trump endorsed in the midterms.

Mike Papantonio: Now go, let’s spend some time with that.

Mike Papantonio: That’s an important part of this story, right?

Farron Cousins: Yeah, it is.

Mike Papantonio: Pick it up.

Farron Cousins: Because he picked people that are a lot like him.

Farron Cousins: All of those people were Trump’s handpicked people.

Farron Cousins: And every one of them got embarrassed.

Farron Cousins: In fact, of all the people Trump endorsed that were not incumbents and not running unopposed, only one of them won and that was JD Vance in Ohio. And so he, and, and JD Vance was, you know, he plays both sides of being a MAGA guy and a normal Republican pretty well.

Farron Cousins: And that’s what helped him.

Mike Papantonio: Okay. Well I think there’s another part to it. I, I the, okay, let’s look at the other side of it, Sununu. Okay. Sununu Governor, running for governor. He says, look, I don’t want anything to do with this guy. I think he’s a nutcase. I’m, I’m appalled at what he did with January 6th. He distances himself from it totally. He wins. You know, just wins in the primary and wins huge in the general election. Kemp. Okay. Kemp in Ohio. Now.

Mike Papantonio: Excuse me, Kemp in Georgia. So Kemp says he’s a nutcase. I don’t want anything to do with him. Distances himself from Trump. Wins in the primaries and beats Stacey Abrams in the, in the general election. So the point of this story that was done is this guy’s been a gift. He’s been an absolute gift to the Democrats. Now he’s so weak. He’s so weak. He’s, he, there’s no way he’s gonna make it again. Who’s gonna fill up that space? You know, we’ve talked about that. I don’t wanna take any time on this segment. We, we have ideas about it. But the point being, as he leaves, we’re gonna see Republicans moving back to normal. They’re gonna scream back to normal and they stand a better chance in winning when they move back to normal.

Farron Cousins: It, exactly. And that’s why the author here, a woman by the name of Elaine Kamarck, who I don’t know if that name stuck out to you. Many, many years ago we interviewed her on Ring of Fire. That, so yeah, another.

Mike Papantonio: We’ve been doing this a long time, haven’t we?

Farron Cousins: We really have. But it’s.

Farron Cousins: But, but she points out that, listen, when the Republicans go back to normal and they’re not seen as overtly crazy anymore.

Mike Papantonio: Did you see the edge of that though? They said when the Republicans return to normal, then the focus gets to the Democrats on that, what they consider the crazy edge.

Mike Papantonio: Farron, as usual, thanks. Thanks for doing the show. Lot of great stories.

Mike Papantonio: That’s all for this week. But all of these segments are gonna be available this coming week right here on this channel. You can follow us on Twitter @AmericasLawyer. I’m Mike Papantonio and this has been America’s Lawyer where we tell you the stories every week that corporate media won’t tell because their advertisers don’t let ’em and because their political contacts are so close that it doesn’t allow for these stories to be told. We’ll see you next week.