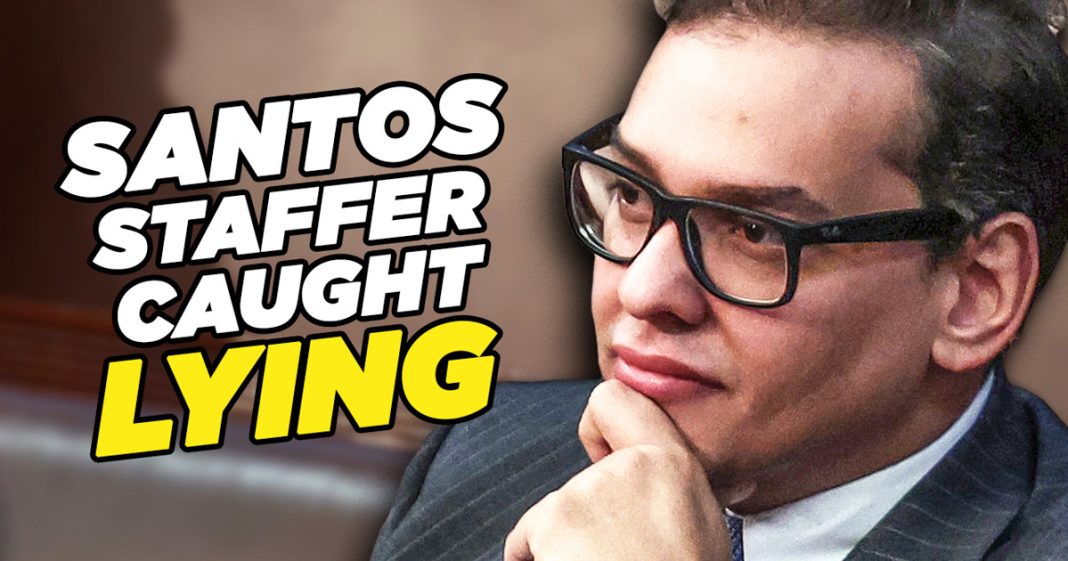 Mike Papantonio: A staffer for George Santos allegedly impersonated Kevin McCarthy’s, chief of staff to raise money. Okay. Headline, it’s against the law. You cannot, you cannot impersonate somebody else and say, hey, I’m with, I’m with McCarthy. I need your money. Send it to me. The guy should be in prison. And the Republicans can’t pull themselves to getting rid of the guy. I mean, just, he is a freak. I mean, he lied about who he is. His, he lied about his religion. He lied about his education. He lied about where his financing came from. The guy is a total fraud. And they won’t pull the trigger on this guy. Pick this story up though.

Farron Cousins: It, it, it’s so disturbing here that yeah, he paid a staffer for two campaigns, 2020 and 2022. Staffer made about a hundred thousand dollars over the two campaigns. And what this staffer did was he impersonated a man by the name of Dan Meyer, who was Kevin McCarthy’s chief of staff. He emailed and made phone calls saying, hi, I’m Dan Meyer. I’m with Kevin McCarthy’s office. I got this great candidate here in New York, George Santos, he needs some money. What can you do for him? And they said, oh, well, Dan, we, we love you. You know, we’re good friends with McCarthy, so sure we’ll give money to this guy you are pitching because you’re putting your faith in him. And the the staffer knew this. I, I refuse to believe that Santos didn’t know this was happening.

Mike Papantonio: Oh, he knew it was going on. This is a guy that is being indicted, he’s, where at, is it Bolivia?

Mike Papantonio: Brazil, yeah. Okay. So they’ve got indictments trying to chase him down in Brazil. He comes to the United States, fits into politics perfectly, no question he fits into politics perfect. You know, I try to sometimes sum up, what does it take, what’s that mentality of the politician? And I say across the board, I don’t know whether it’s chicken or the egg, but they’re the same kids that, that used to hide toys in the sandbox and blame it on the other kid when the teacher would say something about it. That’s, that’s the pol, that’s the politician. And so this guy is that much, much worse. The guy is on the edge of criminality. And the Republicans don’t have the guts to say, you know, you’re outta here, George.

Farron Cousins: Well, you know what’s even creepier about this story, because like I said, it happened in two election cycles, McCarthy’s office was made aware of this happening in 2021. So they knew for a year and a half.

Mike Papantonio: That it was.

Farron Cousins: That this guy was doing it. But they were like, well, I guess he’s our candidate, so we’ve gotta let it slide. So it, it’s just failures across the board. But it’s intentional failures. They knew this, you know, possibly fraud was taking place and they let it happen because it’s one of our own. We’re not gonna go after our own guy.

Mike Papantonio: God all mighty, will we ever abandon it? Our viewers are tribal. Politicians are tribal. We can’t understand how difficult it is to make that escape and understand, let’s just call balls and strikes. When somebody like Santos comes along, let’s get rid of ’em. When a, when a, a Trump emerges, let’s deal with it then. When we find out the Democrats are doing some of the things we’re seeing right now, let’s talk about it and say it’s not right. Tribalism is killing democracy.