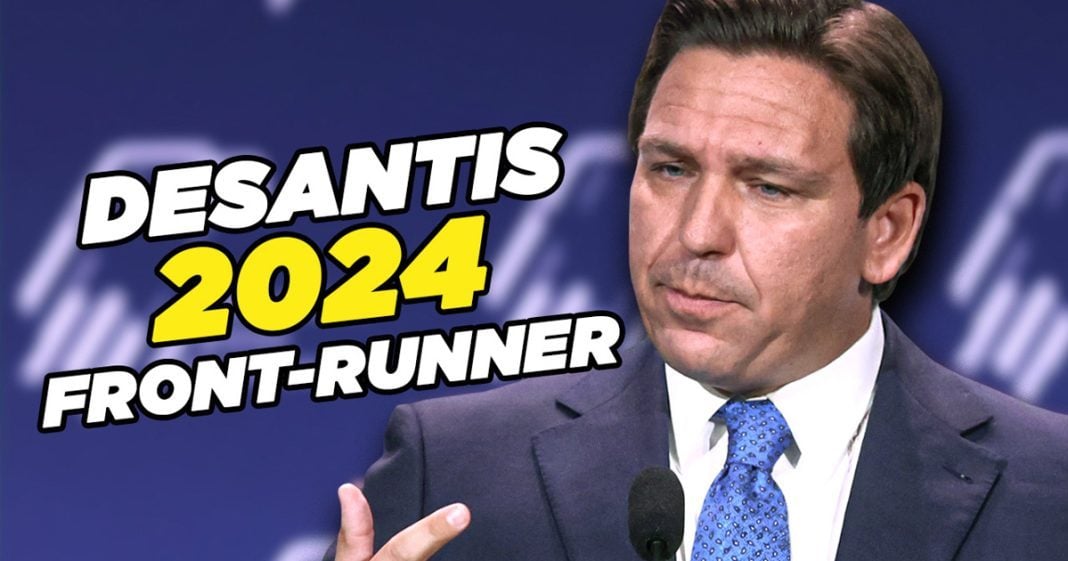 Ron DeSantis is the clear frontrunner for 2024 right now, but that might work against him in the long run. Mike Papantonio & Farron Cousins discuss more.

Mike Papantonio: Ron DeSantis is the clear front runner for 2024 right now for the Republicans. But that, that might work against him in the long run. They’ve done so many studies on this. They look at, I, I think the best example was, was Bush. You know, little, what’s his name?

Mike Papantonio: Jeb Bush. Little Jeb. Okay. So Little Jeb is, you know, he’s out there, he’s the front runner. He does kind of what Biden did in the president election. He kind of goes down to the cellar, disappears. Nobody, he doesn’t talk to anybody, doesn’t talk to the media, nobody knows where he is. It’s, it was kind of the Biden approach really.

Farron Cousins: No, absolutely not. Jeb, you know, was the clear front runner. Had over a hundred million raised and he thought, I’ve got this. I don’t have to do anything because it’s in the bag. And the more he stayed hidden, the less he said publicly, it gave rise to this whole crop of Republican candidates in 2015, 2016, who absolutely humiliated Jeb. I mean, ended any future prospects he may have had.

Farron Cousins: He was so embarrassed that his career and possibly for the whole Bush family is just done now. It’s done.

Mike Papantonio: It was, it was like a blood bath every time. Once he got it, he said, well, I can’t just sit here. Yeah. I’m a front runner. I’ve been governor of Florida, I’m in good shape and I’m gonna sit here and be quiet. So the question is, what’s DeSantis gonna do? I don’t see him doing that because he’s already kind of out there. If anything, you know, we don’t know. I guess the, the next analysis probably is, is, is DeSantis weighed against Scott Walker, which is a big stretch. Scott Walker was just a, a character without any personality. No charisma. Intellectually, he was a big dope. Everything came out of his mouth was stupid talk. You don’t have that with DeSantis.

Farron Cousins: But I, I do see a lot of parallels between the two here.

Farron Cousins: Because we talked a lot about Scott Walker, obviously back in the day.

Mike Papantonio: We did. Yeah. Yeah.

Farron Cousins: That’s where they tried all of the most extreme, you know, corporate legislation. He got it all done. He was the darling of the Koch brothers, and that’s what really propelled him. And it’s kind of the same with DeSantis. What we’ve seen happen here in Florida has become the Republican blueprint state by state. So DeSantis was the guy, much like Scott Walker that said, I’ll do it here first. If it works, you take it there. And another parallel I see that was pointed out here is that Walker got killed in the debates. And I think that’s gonna be his big Achilles heel.

Farron Cousins: Because I’ve seen him when he’s.

Mike Papantonio: He, he gets mad, doesn’t he?

Farron Cousins: He gets real mad. He gets thrown off his talking points. He gets flustered.

Farron Cousins:He, if, if he can’t get coached, which maybe he will, maybe he won’t. He’s got plenty of time.

Farron Cousins: Then he’s got a real Scott Walker problem.

Mike Papantonio: But aren’t you praying for somebody besides Trump? I mean, I, I just can’t, I don’t think I could stand another Trump Biden cycle. And so, which brings me to this idea. Biden is on the border, he’s acting, he’s already talking about his next big run. This is a guy who said, I’m never, I’m a one, I’m a one term guy. This is what he promised, didn’t he?

Mike Papantonio: He promised to, I’m a one term guy, I just want to, I just wanna move Trump out of there, which he successfully did, which was necessary. But now it’s looking like, no, this old guy’s gonna run again. He’s gonna run when he is 80 years old or something like that. And so what is your take? Is he serious? I mean.

Farron Cousins: I, I really can’t make heads or tails of it yet. I mean, I, I hope, listen, I, I, I haven’t hated Biden. I’ve been very critical of, you know, a lot of things he’s done. But I’ve been, you know, when he does good, we say he does good. But it’s time for somebody else. Biden’s been there, you know, way too long just in DC in general. But at the same time.

Mike Papantonio: What is it ,45 years. I don’t, has the guy ever had a job besides Washington, DC.

Farron Cousins: I don’t even know.

Farron Cousins: But on the Democratic side, we don’t have the people waiting in the wings.

Mike Papantonio: Who do you have? Who, who, who do the Democrats have out there on, on, on that side?

Farron Cousins: I don’t think they do.

Farron Cousins: I, I don’t think that person exists. Four, well, I guess six years from now, you’ve got several people that could be coming up. Katie Porter at the top of the list.

Farron Cousins: But Katie Porter’s not there.

Mike Papantonio: She’s not. I love Katie Porter. I think she’s got a lot of courage. She’d be a great candidate.

Mike Papantonio: The, the advantage I have is, you’ve heard, everybody knows this. I’m not a Democrat. I’m hell sure, not a Republican. But as I look at it, and I’m looking at it like a chess game, if I’m saying if he, if, if he does pull through primaries, you got California with Newsom, you know, that’s their guy.

Farron Cousins: Yeah. That’s the other guy we talked too.

Mike Papantonio: That’s, that’s the guy. And he has appeal to the left coast and the right coast. He dies in middle America, fly over America. There’s no way they’re gonna bring anybody in from California to win at this point. I, I just think that’s, that’s kind of the way I see it. But I, I just don’t know who the, I don’t know who the Republicans or the Democrats come up with that you go, wow, it’s a powerful candidate.

Farron Cousins: Well, even if Newsom were to overcome his problems in middle America, which you’re right, because Republicans have spent decades demonizing California.

Farron Cousins: You can’t overcome 30 years of talking points in a year. But okay, assume Newsom somehow manages, who do you even pair him with? Because you couldn’t just switch Harris from Biden over to Newsom.

Mike Papantonio: Well. Okay, so what are Harris’s numbers? What are the numbers are, is she, is she even in the game?

Farron Cousins: I mean, her numbers against even other Democrats in the primary, she’s not gonna win. She’s definitely doesn’t beat DeSantis. She doesn’t beat Trump.

Mike Papantonio: There’s something about the California card right now that I think Newsom’s risky. Go to Montana, go to Wyoming, go to any of those places where there’s a, you know what it was 450,000 people left California last year, migrated from California. And when you go and talk to those folks in Montana about California, it’s oh my God, kind of reaction. And I don’t know what that is, but it is out there. It’s middle America issue.

Farron Cousins: So, so if the Democrats do come up with somebody else, and it’s not Newsom, even though Newsom is ready to go, he says.

Mike Papantonio: Oh, he is. Yeah

Farron Cousins: You’re gonna end up with probably a sleeper candidate, maybe a Gretchen Whitmer from Michigan, which Michigan would be a good place to get somebody.

Farron Cousins: Or maybe a Jared Polis from Colorado.

Mike Papantonio: It’s, it’s starting to develop as you know.

Mike Papantonio: Farron, thanks for joining me. Okay.

Mike Papantonio: That’s all for this week, but all of these segments are gonna be available this coming week right here on this channel. And you can follow us on Twitter @AmericasLawyer. I’m Mike Papantonio and this has been America’s Lawyer where we tell you the stories every week that corporate media can’t and won’t tell you because their advertisers won’t let ’em tell those stories or because their political connections are so tribal that it doesn’t allow for it. We’ll see you next time.