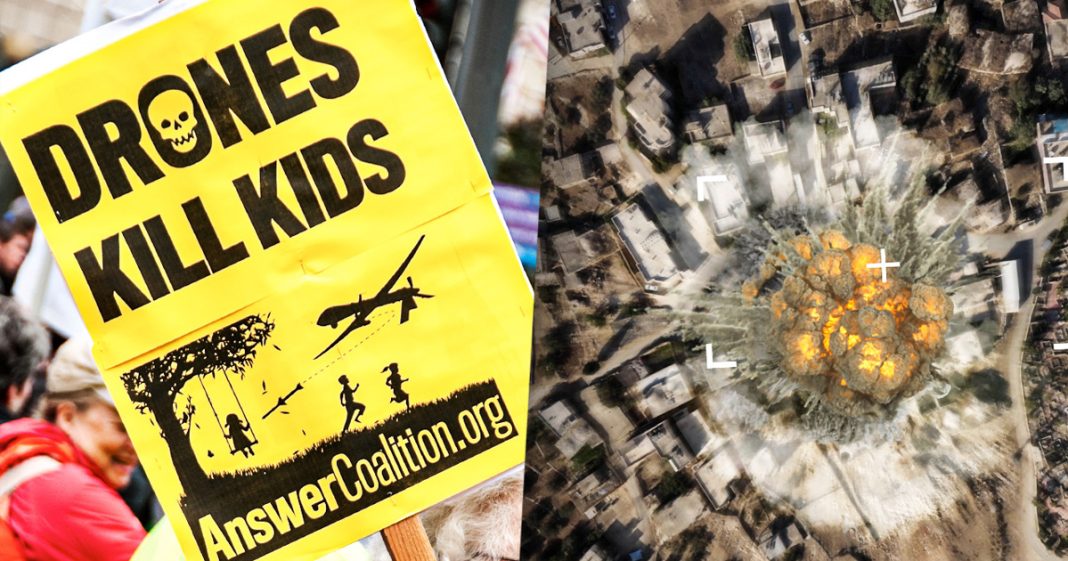 New documents show that the government LIED about a drone strike that killed an Afghan civilian and a group of children in August of 2021. Mike Papantonio & Farron Cousins discuss more.

Mike Papantonio: New documents show that the government lied about a drone strike that killed an Afghan civilian and a group of children August, 2021. You did this story. I, I remember us doing it on the show and we saw the, we actually saw the film footage and the film footage was where you had a humanitarian aid, aid man. He was working for humanitarian aid, carrying water, because that’s part of what they did is provide, provided water for a particular area. Drone comes out of the air, blows him up. And this is where it gets Interesting. The report, everybody’s asking, well, it killed a lot of people, innocent people besides that innocent person too, didn’t it? And the, it, it disappears, the story disappears. All of a sudden now the report resurfaces a year later and we learn some new things, don’t we?

Farron Cousins: While driving his vehicle filled with water and kids.

Farron Cousins: Oh, and we saw the big containers of water and we assumed they were explosives.

Mike Papantonio: Yeah. This is, this is a CIA drone operated and, and targeted and the whole, the whole thing’s planned with the CIA. Which brings me to another point is just kind of an aside. We did a story last week and we’re talking about the dangers of what’s happening with the CIA moving into the tech industry and how dangerous, and we get these comments, well, these are trained people, these are people who understand intelligence. Why would you have any problem with them going to work with Instagram and Facebook and Google or whatever? Why would you have problems with that? Well, this is a pretty good example right here.

Farron Cousins: Yeah. That, not exactly the, the best training. And we see too much of this. I mean, we saw it during the Biden administration, during the Trump administration. Now of course we see it under Biden where all of these civilians are being slaughtered by these remote controlled drones. And, and honestly, I think a part of it, I remember in my literature class in college, we read the Odyssey, we read the the Iliad and in the Iliad he pointed out, the professor did, it’s important to understand that every time they talk about somebody on the battlefield being killed, which is most of the book.

Farron Cousins: And when we have now evolved from having to be up close to kill somebody.

Farron Cousins: To now you can do it remote control from thousands of miles away.

Farron Cousins: It desensitizes. And you take away the humanity of these people. And so that’s why it’s easy to just click a button and say, oops, wrong guy. Let’s reload the drone and do it again.

Mike Papantonio: Right. So they start off, this is a righteous kill. We did everything right. This is CIA, righteous kill. We didn’t make any mistakes. And now the end line is, oh my God, this was a tragic, horrible mistake and we’re sorry. Here’s where it really gets interesting. The people, I promise you who helped delay this report, helped cover it up. Make everybody just forget about it. You know, wait, a year, year and a half before we ever bring this out, are the people who built these rockets, built these drones, Lockheed Martin, General Atomics, you know, they build these things like the Reaper or the Hellfire Missile. Well, if, if it gets out, if, if the common discussion is the Hellfire Missile is, is inappropriate because it kills everything around it, it kills civilians. It’s not really targeted in the way that, that Lockheed Martin says it’s, it’s targeted. If that gets out, the government has to respond and they don’t buy as many Hellfire. The, the industry’s part of keeping this just as quiet as they can. Let’s wait a year and a half before anybody talks about it.

Farron Cousins: Yeah. And it’s because they’ve kind of moved into this approach now where it’s like, okay, we have the field. We could go out and just pick the weeds by hand and that way we know we got the weeds, but instead we’re gonna napalm it.

Farron Cousins: You know, we’re gonna Agent Orange the whole field and then everything dies. But hey, at least we got the two weeds that were sitting out there in the middle of the field.

Farron Cousins: That’s the solution now is kill everything.

Farron Cousins: Bury it, cover it up, and then when everybody forgets about it, quietly release it. And again, I saw this in Common Dreams, haven’t seen it anywhere else.

Mike Papantonio: But what if you saw every day, or every time this happens, Hellfire Missile, or Reaper takes another 10 people out? Well, the government has to respond to that, right?

Mike Papantonio: They say, well, I’m sorry, Raytheon, or, or, or, you know, whoever it is of the day, missile of the day, we can’t buy your missiles because the pub’s too bad on it. We can’t buy it because it’s killing too many citizens. That’s very much a part of keeping this tap down.