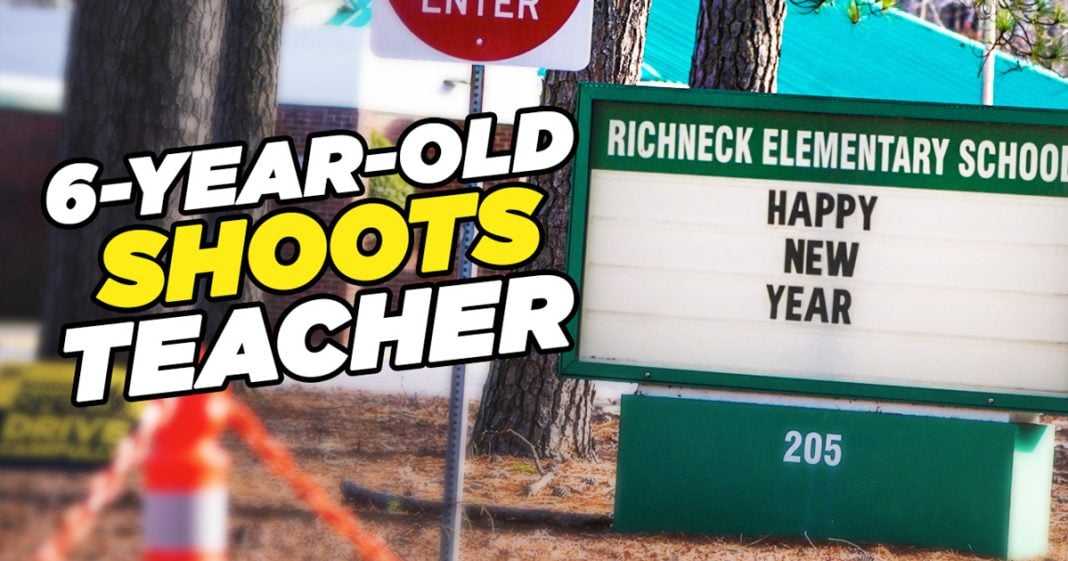 Mike Papantonio: A six year old was arrested last week after shooting his teacher during class. You know, before we came on, I missed something that you pointed out to me, Farron, I think it’s critical, critically important. I read this, I thought the kid just had a gun. It went off in school. You, what you did is research. You found there was intent to actually shoot the teacher.

Farron Cousins:That is what the police officers who have already been investing, investigating this, excuse me. They say that this was not an accident. This child intended to come to school and shoot this teacher who at this point still remains in critical condition.

Farron Cousins: So a six-year-old had the thought process going in their head, I have to do something about this teacher. So far we don’t know exactly maybe what has spurred that. Maybe the kid got in trouble the day before, we don’t know. But the kid manages to, to get a gun. We’re still kind of figuring out details. Where the hell did this come from? Gets into school, shoots the teacher, mass panic, obviously. But luckily, nobody else.

Mike Papantonio: There, there’s so many parts to this story. I mean, did, did the kid learn to do that watching Barney on children’s tv? Did, I mean, is that where? No, he didn’t learn it there. He learned it somewhere else. He learned it on just watching general television, watching social media, playing games, whatever it may be. We can’t go on and just ignore this white elephant that’s in the room. I mean, there’s, there’s, there’s some reasons that this kid, six year old was able to, to come up with mens rea and come up with a real notion, I’m gonna go shoot that teacher. Hopefully kill her. The other part of it though is some of this stuff’s easy to solve. First, first of all, make the parents have an insurance policy on that gun. Make it cost $2,000 a year to have that gun or any other gun that you have. Whatever it may be. Require that they have a license for it. Just like a driver’s license where they have to go to school and they have to sit through a week of school where they learn about the ins and outs and the prob, probab. I mean, we do this, we do, we give licenses all the time. Driver’s license, name it. The, the point is, make ’em do that type of thing. Make it more difficult for them just to go out and just buy a handgun and leave it around that the child might be able to have access to it.

Farron Cousins: Exactly. If the child didn’t have access to the gun, this would not have happened. And another thing that can be done too, along the lines of the insurance, the homeowner’s insurance needs to drop people if these guns are not safely locked up, lock and key.

Farron Cousins: To where the kids can’t get ’em. I mean, that, there’s a very simple solution these home insurance companies could do.

Farron Cousins: I mean, they drop people for all kinds of things. If you own the wrong kind of dog, they’ll drop your insurance.

Farron Cousins: But not if you leave a gun laying around on your living room table, they’ll just keep going.

Mike Papantonio: Yeah. Well, it depends on how you, I mean, I grew up with guns, I have guns, have always had guns and, but I, I understand the process of it. Most people, a lot of people don’t. I mean, they just go out and buy a gun and they don’t even think, well, if I put it in my drawer, it’s gonna be okay. No, it’s not gonna be okay. And I think the insurance angle is a, is a really important angle. Insurance companies could have a big impact on this.