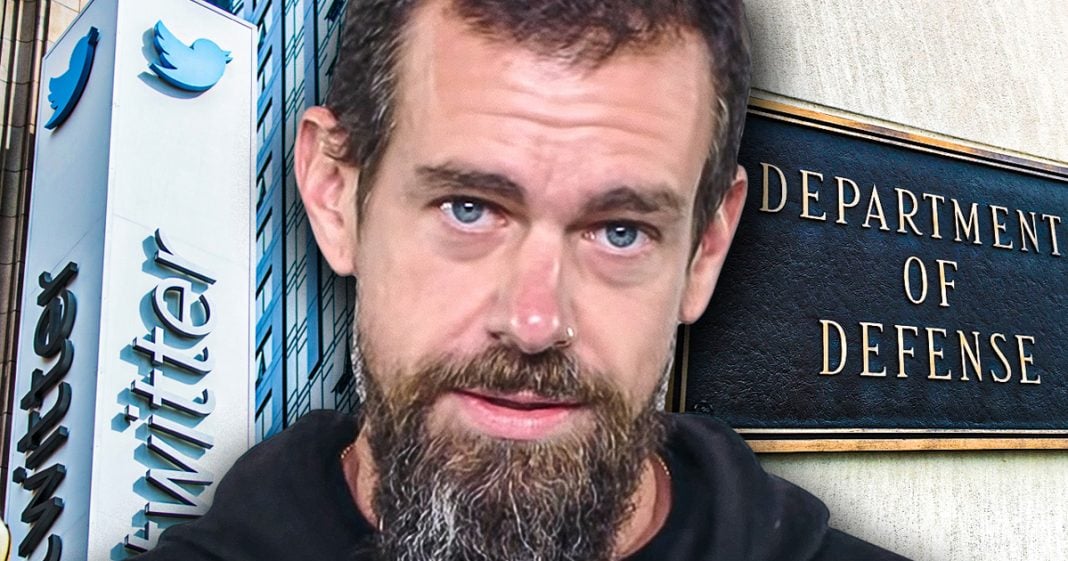 A new batch of Twitter Files have been released showing that the United States got permission from the platform to use it to spread propaganda. Mike Papantonio & Farron Cousins discuss more.

Mike Papantonio: A new batch of Twitter files have been released showing that the United States got permission from the platform to use it to spread propaganda. Okay. Now first of all, these stories are coming out by an organization that both you and I really, really think is critically important, it’s The Intercept.

Mike Papantonio: And you’re dealing with reporters like Lee Fang, who is just, I mean, the, this guy ought wear pol, he, he ought to win Pulitzers left and right. But, you know, he doesn’t because he’s working with social media. So I look at this story and it’s not just government. We’re talking about the spook industry. We’re talking about the CIA, FBI, the DO, the Department of Defense using this vehicle for sheer propaganda. And now we know it. Before it was just, well, maybe they are. No, they are.

Farron Cousins: Right. What Lee Fang uncovered here in this new batch of Twitter files, which to me the first batch is a, meh, I don’t really care.

Farron Cousins: This is a big one.

Farron Cousins: This is kind of, you should have led with this because this is important.

Farron Cousins: But what he found was these emails from the Department of Defense, the Pentagon, the CIA saying, hey, Twitter, uh, you, you seem to have throttled this account here. You know, and they’d give them normal sounding names and they said, listen, this, this is actually what we use to, you know, spread lies about these other countries.

Farron Cousins: So we’re gonna need you to go ahead and whitelist all these accounts. And they would send a big ol’ list.

Farron Cousins: The whitelist means you can pretty much do whatever you want.

Mike Papantonio: Whatever you want.

Farron Cousins: We need to convince the people in Iraq that Iran is about to attack them at any given moment. And, and that’s one of the things.

Mike Papantonio: Well, I mean, it’s crazy stories. Like they, they, it’s CENTCOM. CENTCOM, explain CENTCOM to the viewers, please.

Farron Cousins: Yeah. That is the centralized command center, basically, of the entire, not just defense, but I guess intelligence apparatus in the United States.

Mike Papantonio: Yeah. It’s, it is, it’s the center of the spook industry.

Mike Papantonio: Yeah. It is the hub of the spook industry. And now, okay. First on so many levels, first of all, we know now the CIA was directly involved with this. Okay. We know that after the Church Hearings, it was made very clear the CIA, CIA should have no, not, they shouldn’t touch domestic politics at all. Jack Dorsey obviously knew exactly what was going on. It had been going on for, what, five years?

Mike Papantonio: There’s, there’s a five year history that we know about just by what’s, what’s showing up. But you see the problem here. I, I don’t know how anybody listening to this story says, oh, it’s okay. It’s okay if government creates propaganda. It’s the same thing, if you remember, that they went after the Russians about. The Russians are creating propaganda. Well, they spent $175,000 creating propaganda. Here, this is a limitless budget coming directly from the US government that says, we want to tell a story the way we want to tell the story. We want to, we want to gin up interest in Syria. We wanna make people mad about Ukraine. We wanna make sure that Venezuela is something we talk about all the time. We want to create this centered message by way of your site, Jack Dorsey, and Jack Dorsey said, okay.

Farron Cousins: We, we also want to control the narrative about what’s happening in Yemen too.

Farron Cousins: So they wanted to completely whitewash everything that was happening there. And I, I just, I cannot stress this enough. The government itself, and, and this goes back to, and I guess this is worth mentioning definitely, where we talked about years ago in the military budget, suddenly it was uncovered you’re setting up a propaganda arm.

Farron Cousins: What, what are you gonna do with this propaganda arm? Okay, well now we know.

Farron Cousins: Yeah. It, it was his last year, I think, when they created it.

Mike Papantonio: Here’s how they did it. They actually were willing to create computer generated personalities. Okay. They would take Farron Cousins, they’d put another head on Farron Cousins. This is a new character, Farron Cousins. He’s, he’s telling a story for Apex, Apex News Service. Apex News Service was computer generated. It wasn’t even real, it was fake. Wasn’t even out there. And then they’d create the fake story that the fake Farron Cousins would tell on the fake network. And everybody’s, people listening to this story are gonna say, well, that’s okay. That’s okay because, well, it’s making us safer. Really? I mean, come on. Pick.

Farron Cousins: No, no. This was, this is absolutely meant to create more tension in the Middle East, to excuse the worst behavior of some of the people that we call our friends, but really are the biggest enemies we’ve got out there attacking the countries that, you know, we want people to think are the real enemies. It, it’s disgusting.

Mike Papantonio: Now that’s a big one. Let’s whitewash this nutcase, this Prince nutcase, who, didn’t they set a record last year for beheading people?

Mike Papantonio: They, that we know, you know, I, I think we, we always talk about this guy without talking about the fact that he is a blood thirsty murderer.

Mike Papantonio: He abs, Khashoggi, that, that Khashoggi, that’s, that’s one part of the story. If you look at this guy’s history, it’s awful. So what do we do? We use Jack Dorsey, we use his network to whitewash a guy like that. And the government is doing it by creating the story, creating these news services that don’t even exist. And nobody even asked the question, well, I’ve never heard of Apex News Service. It sounds credible because it’s been created by the government.

Farron Cousins: Well, and, and people have to understand there’s actual human beings at the CIA, possibly at the FBI and the Pentagon, that do this all day.

Farron Cousins: They make up these fake articles. These are people, how do you go home, how do you tell your wife and kids like, oh, I had a great day today. I convinced Iraq that Iran was putting meth in their water supply.

Mike Papantonio: Yeah. That was a story, wasn’t it?

Farron Cousins: It was. That was a real thing they did.

Mike Papantonio: They told the world that it was a big story in the US. Of course, the idiots on MSNBC, the idiots on Fox, the idiots on CNN pick up that story. They’d pick it up right off of social media and say, did you know that Iran is putting meth in Iraqi, in the Iraqi drinking water? It’s created by the government and these morons that are running these news services don’t even stop to ask, is this a real story?

Mike Papantonio: How about, how about the bombing in, in, in Poland?

Farron Cousins: Right? Yeah. The, the AP guy who came out and said, oh, Russia just sent missiles into Poland. They’ve killed a couple people. And then.

Mike Papantonio: The story behind that was, oh, this came from an anonymous service.

Mike Papantonio: Came, well, an anonymous source and anonymous service created by the government. I don’t, this is terrifying to me. I, I don’t.

Farron Cousins: It really is.

Mike Papantonio: I don’t know why it is.