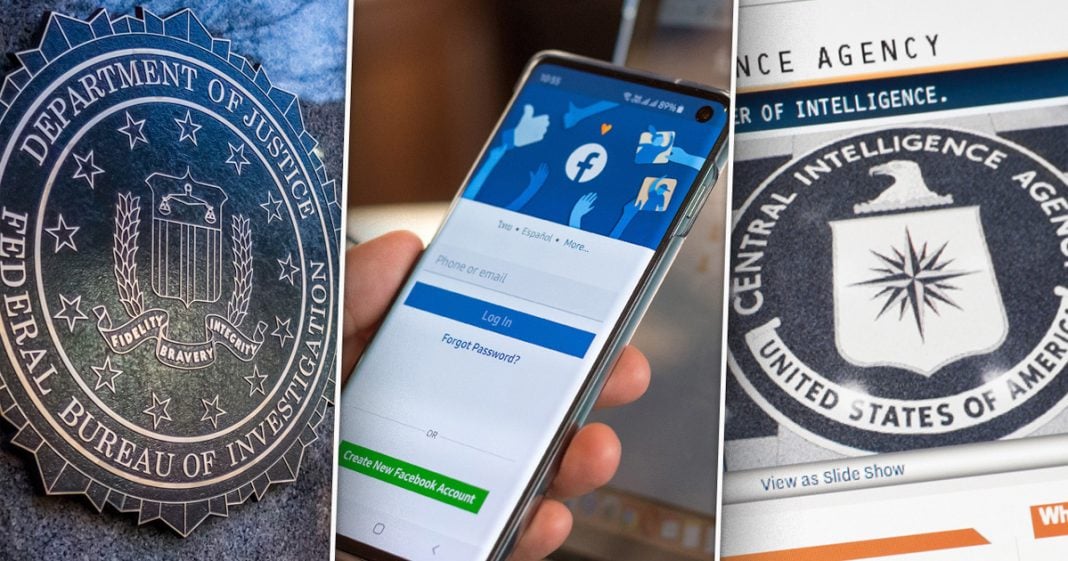 Mike Papantonio: There’s a, this terrifying revolving door that’s emerged between intelligence agencies and social media companies. Wow. Okay, so here again, you have reporters. They’re not just talking. They’re, these aren’t fake reporters. These are real people, real news services, Daily Mail. And they say, we’ve looked at this and we can name the number of CIA agents, CIA agents, FBI agents that have directly gone to work with Facebook, with Twitter and with Google. And then they give us the names. Pick up, pick the story up. I, I, this is a remarkable story. Did you see this anywhere, anywhere on national media?

Farron Cousins: No. That, that, that’s what is so frustrating about this stuff too, because yeah, they found all these CIA agents, you know, former CIA lawyer, Gina Haspel.

Farron Cousins: One of ’em. Jim Baker, also one of ’em, of course, everybody knows he was with Twitter until recently.

Farron Cousins: They realized, oh wait a minute. Get the hell outta here.

Mike Papantonio: Yeah. He was with the FBI, CIA and then went. Yeah, exactly.

Farron Cousins: But, but what has happened here, which we’ve talked about with the FDA, with the SEC, the revolving door.

Farron Cousins: We are sending our good agents, you now work at Facebook for some reason.

Mike Papantonio: They, but you see, the problem is management knows it. They’re cooperating. They’re cooperating because they’re getting money from the government in various ways. Just like Amazon. Okay. Amazon gets these huge government contracts, these other folks do too. So Jack Dorsey, I guess was thinking, well, wow, if I let Aaron, Aaron Berman in, or no, Aaron Berman went with, he went with Facebook. But this, this guy was, he was the service manager, he was the security service manager for Facebook. He’s the guy who said, this is a story we’re gonna allow. This is a story we’re not going to allow. We’re gonna throttle this one back, we’re gonna throttle forward on this one. He was with, he, he was a spook most of his life working for the CIA.

Mike Papantonio: You have Deborah Berman. Well, she was a former intelligence analyst with the CIA. Notoriously, notoriously secretive in what she did. But you had, she was working on, her project with Facebook was to take misinformation and decide whether we should pull that mis, misinformation or whether that misinformation is going to help us. So she decides, do we put it on, do we take it off? How many more people are there?

Mike Papantonio: I mean, we don’t have time to go through all of them.

Farron Cousins: There’s, you know, Kris Rose, who’s political and counterterror, terrorism analyst at the CIA. He went to Facebook. He joined them in March of 2020. Bryan Weisbard, CIA intelligence officer, he went with, um.

Farron Cousins: Yeah. And, and we don’t even have the whole list.

Mike Papantonio: But they all, no.

Mike Papantonio: They came from the spook industry.

Mike Papantonio: And people like Jack Dorsey and, and, and, and, and Zuckerberg, said, look, come to work with us. But it wasn’t just, you see there was something in it for them. Let’s let this spook decide what we’re gonna put out there in the public. They’re gonna take, they’re gonna make the decisions. We’re putting them in charge. But the rest of the story is when they did that, they benefited some way in all kinds of ways from the government. Just like, take Amazon again. Go back to, go, go back to that story. What was it a $600 billion contract? Was it 600 billion dollars?

Mike Papantonio: Yeah. So these, these, these freaks want to say, well we are just looking out for the American public. No, they weren’t.

Farron Cousins: No. And.

Mike Papantonio: They were looking out for themselves. They were destroying everything we hold dear about the freedom of press in this country.

Farron Cousins: And, and you also have to wonder too, what else did they get in return? Because a revolving door of this size with this many people from this one area of the government going to these exact same companies, there’s a bigger relationship there. And I hope that gets flushed out because they get access. Just like we talk about with media outlets that hire the former CIA people.

Farron Cousins: It’s because they want the access. So why did, why did these groups need the access? That’s a question we still need answered.

Farron Cousins: We also know that these are companies that are still largely unregulated.

Farron Cousins: Facebook alone facing tons of lawsuits for monopolistic behavior. They want to be in good with the government because they did it with Obama. They did it with Trump. They’re doing it with Biden.

Mike Papantonio: Oh, it goes all the way back to Bush.

Farron Cousins: Yeah. So no matter who’s there, we’re gonna be your friend. We’re gonna give you what you want, in return, you don’t touch us.

Mike Papantonio: Don’t hit us for monopoly cases. Don’t, you know, say it’s an antitrust case. Give us a break when you can. Even though Europe is killing us.

Mike Papantonio: Europe is fining the hell out of us for doing all this illegal stuff. Don’t do it in the US and we’re gonna let your spook industry take control of this entity. That’s exactly what’s happened here.