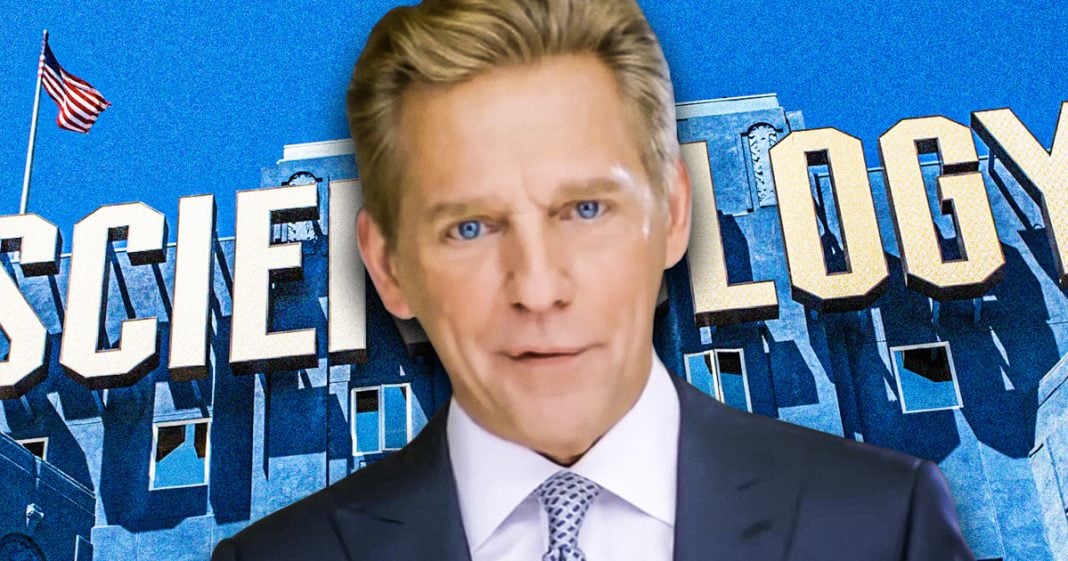 A leader at the Church of Scientology has disappeared after authorities tried to serve him with a child trafficking lawsuit. Mike Papantonio & Farron Cousins discuss more.

Mike Papantonio: A leader at the Church of Scientology has disappeared after authorities tried to serve him with a child trafficking lawsuit. Farron, you and I have done plenty of stories on this cult of crazies. That’s what it is. It’s not a church, it’s not a religious organization. It is a cult of maniacs. And nevertheless, we give them, we give them a tax break. They don’t have to pay taxes. Now this guy that, that’s running the entire organization is on the run. He’s hiding out because of this lawsuit that’s been brought by a Florida lawyer down in South Florida. Go ahead.

Farron Cousins: Yeah. And, and we actually, we talked about the lawsuit really just a couple weeks ago.

Farron Cousins: You basically, you have these children, some as young as you know, five and six years old, they get pulled into the church with their families and the, well, I don’t wanna call it a church. The Scientologists put them to work.

Farron Cousins: Scrubbing boats, cleaning hotel rooms, doing all kinds of horrible things for no pay at all. Basically using them as child labor. They’ll take away any documents they have so that they cannot escape. They’re trapping these people. It is human trafficking.

Farron Cousins: Just through an organization that most people in this country somehow view as legit. It’s disturbing.

Mike Papantonio: Well, I mean, okay, so it starts in California. You would, no surprise there. It’s the hub of crazy. So it starts in, starts in California and then Florida, second hub of crazy. It builds its second big monstrosity of an organization in, in Florida. But as it’s doing it, you understand what they’re doing as they build is you brought in the Scientology, you give me everything you’ve got. You may not have any contact with your family. If you have an inheritance, you give it to me. A lot of the money they make is from that. The second big bit of money is, is they don’t pay taxes on anything.

Mike Papantonio: Because for some reason they’ve been, it’s been determined that they’re somehow a, a religion. It is a cult of crazy. What I think is interesting, L. Ron Hubbard, who started this whole thing, started it on a pretty good premise. And that is the American and international psychology has become a, a, a dirt pit. That it doesn’t work. It’s, you know, we’ve made it into something that it’s not, that it shouldn’t be. So he starts attacking the, the, the, area of psychology. The discipline of psychology. And he builds his entire structure around that. L. Ron Hubbard was the guy. He ends up spending his life on a boat because he’s running from the law all over the world. Right?

Farron Cousins: Well, and, and, and another part of it too is that, you know, we talk about how we in the US give them this tax exempt status, most countries in Europe don’t even recognize it as a religion anymore.

Farron Cousins: They have stripped them of any status they may have had because they understand this isn’t a religion. You’re not even really praying to a, a deity of any kind. You don’t really believe in anything.

Mike Papantonio: I mean, if you’re gonna have a deity, it’s L. Ron Hubbard, who by the way, was all, always having to run because he was, he had so many fraud cases against him.

Mike Papantonio: The criminal fraud cases against him that he had to live on a boat and he started something called Sea Org. And this whole thing is where, this is where we are. I, I would think that, that that’s where we’re gonna find David.

Mike Papantonio: You know, David is on the run right now because he understands that these charges are, are, are big.

Farron Cousins: David, who by the way, actually served as the best man for one of Tom Cruise’s weddings, I think his second wedding, maybe.

Mike Papantonio: Yeah. Okay. So it’s a real easy solution. And here’s what I hope happens. You, you could, you can yank, you can, you, you can yank their tax exemption. You can get judgements against them. This is exactly what we’re doing with Iran in the terrorist cases. They hold, they have a lot of holdings all over the world, a lot of ’em in the United States. So we get judgements against them for what took place with, with terror groups that have killed American citizens. So we get, we get judgements against ’em. We sell their property. We, we put, we get possession of their bank, bank accounts. And so there’s all these things that they’re able, that we’re able to do, if somebody would show enough courage and just pull the trigger on this, and it doesn’t have to be a criminal event. This, if this civil case turns out to be what I think it is, this is serious stuff.

Farron Cousins: Yeah. And, and I think it’s, people should understand how serious it is. If it wasn’t serious, this guy wouldn’t be on the run right now trying to evade authorities. I mean, they went to his office and security refused to let them in to just serve the lawsuit.

Farron Cousins: So he, he knows, he knows he’s done for, I think.

Mike Papantonio: That’s all for this week. But all of these segments are gonna be available this week right here on this channel. And you can follow us on Twitter @AmericasLawyer. I’m Mike Papantonio and this has been America’s Lawyer, where every week we tell you the stories that corporate media won’t tell you because their advertisers don’t allow for it. Or their political connections are just so strong and they’re so tribal that they won’t allow for the story to be told. We’ll see you next time.