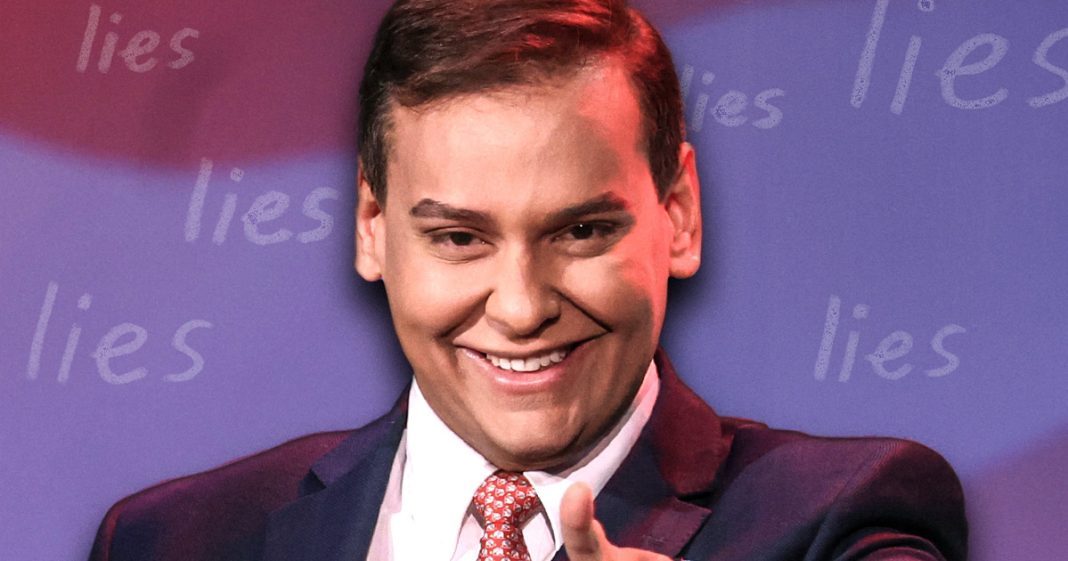 Republican Representative George Santos is in major trouble for lying about all sorts of aspects of his life. Mike Papantonio & Farron Cousins discuss more.

Mike Papantonio: Republican representative George Santos, is in major trouble for lying about all sorts of aspects of his life. Wow. You know, apparently he’s, the Republicans say, this is okay. This guy’s a nutcase. He’s a Republican nutcase. He tells everybody, first of all, he’s Jewish. He’s not. The reason he said he’s Jewish is because he’s trying to raise money. And he does, very suspiciously, raise a lot of money. Millions of dollars. Although when he came to run, the guy was a complete pauper. He was living, he, he was, he was renting a place, and he was months and months behind on his rent.

Farron Cousins: Yeah. And, and it just blows my mind that the Democrats in New York, because they had a dossier on this guy.

Farron Cousins: And they had enough information according to what they’ve said. Look, we, we thought most of this was a lie, but we decided to give him the benefit of the doubt on most of it. And instead they ran a campaign trying to just tie him into the Capitol riot.

Farron Cousins: Instead of pointing out, listen, we don’t know where his finances came from. Could be some shady deals there. Uh, he, he might be a wanted felon in Brazil, maybe. They’ve.

Mike Papantonio: Well, apparently, no, he apparently is.

Farron Cousins: So he lied about his education, lied about who he worked for. This guy, I mean, it’s easier to list the things he didn’t lie about. And now we find out he may have even lied about his mom dying on 9/11.

Farron Cousins: I mean, there’s no end to this at all.

Mike Papantonio: Yeah. Okay. So, so the Democrats have all of this info, this, bits and pieces of this information are already out there. They know about it. But their political, their political geniuses said, no, let’s talk about January 6th, because Democrats are talking about January 6th now. So let’s tie into January 6th. This was like shooting fish in a barrel. He, he said, he says his grandparents were, were, were in the Holocaust, were victims of the Holocaust because he’s Jewish. He’s not Jewish. There’s nothing Jewish about this guy. But he’s living in a Jewish community and the Jewish community sends him tons of money because he starts pulling at their heartstrings. And the Democrats just, just whistling through the graveyard saying, yeah, let’s, let’s do. But how about the, how about the Republicans allowing him to be sworn in?

Farron Cousins: Yeah. That, that’s even more disgusting, obviously, is because they know this guy is a complete and total fraud.

Farron Cousins: His entire past is fabricated. And they had the authority, they can say, as the majority, we’re not gonna seat you. And hey, if you don’t resign, we will immediately vote to expel you.

Farron Cousins: They have that power, but they didn’t do it because they have such a thin majority, you know, five seats that they need everybody they can get. Marjorie Taylor Greene baked cookies for this idiot a couple days ago, weirdly enough, cookies shaped and decorated to look like her. So she delivers him cookies. She’s been defending him because they’re cut from the same cloth. You’ve got these.

Mike Papantonio: This, you know, this is, this is why I talk about tribalism all the time. I mean, I just do. I hate it. As I’ve always said, I’m not a Republican, I’m not a Democrat. I just want to call strikes and balls. So Republicans, rather than doing what’s good sense they let this happen. The Democrats do the same type of thing. But they had all they needed on this guy. Quick question. Where did the millions of dollars come from? When he goes from being a pauper to having millions of dollars. Where’d that come from?

Farron Cousins: Well, he says it’s from his hugely successful business. But there’s a lot of red flags there. And of course that’s what is now being investigated in addition to Brazil has reopened their investigation of him allegedly stealing a checkbook and buying hundreds of dollars in designer clothing. But, so he’s got some legal problems right there on the horizon. But.

Mike Papantonio: I hate to say it, but he looks like Republican. I mean.