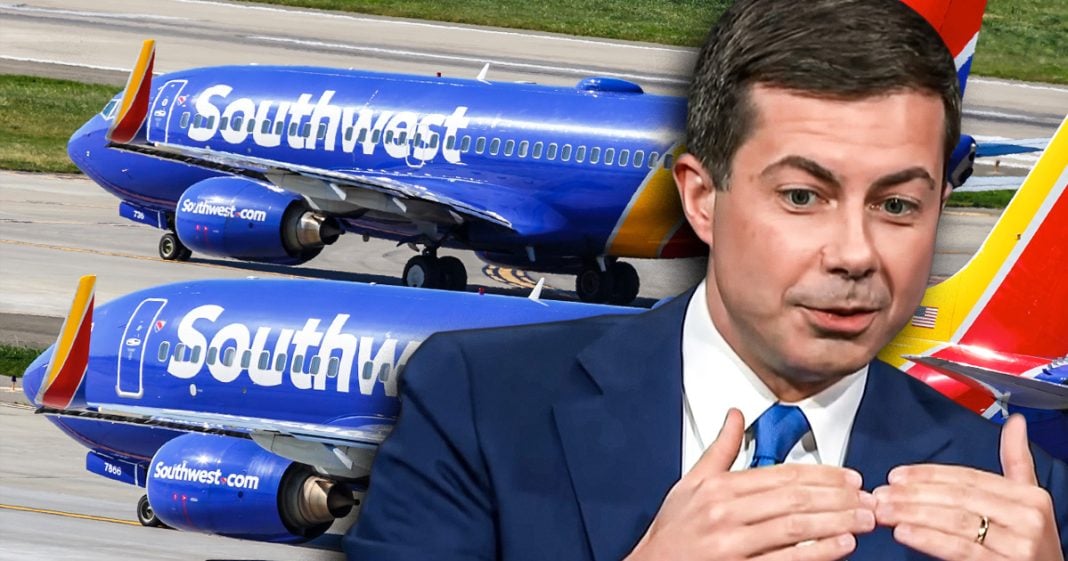 Thousands of Southwest Airlines flights were cancelled in the last week, stranding hundreds of thousands of passengers across the country. And the only thing Transportation Secretary Pete Buttigieg did was send an angry letter to the airline. Mike Papantonio & Farron Cousins discuss more.

Mike Papantonio: Thousands of Southwest Airlines flights were canceled in the last week, stranding hundreds of thousands of passengers across the country. And the only thing our transportation secretary did was send an angry letter to the airline. Ring of Fire’s Farron Cousins joins me to talk about what’s happened. He needs a hell of a lot more than an angry letter to the airline, doesn’t he? You know what bothers me about this is the week before all this catastrophe started, he’s on the air saying, you know, DOT, we have it under control. Travel, there’s not gonna be any impediments this year. Everything’s good. But what we’ve learned now is time and time again, mayor Pete was told, take a look at the airlines, they’re getting ready to crumble where it comes to heavy traffic. Go ahead.

Farron Cousins: You know, this is a really interesting story here, because at, at first I talked about this last week and I said, listen, this guy’s not to blame. Obviously, you know, as the transportation secretary, he oversees it, but he didn’t do this. But when you look into this and you look at what Ro Khanna and Bernie Sanders did all the way back, in I think April, they told him, listen, we’ve got major problems with these airlines. We’ve gotta do something about it. But then 4th of July weekend comes and goes. Thousands of people stranded just like over the holiday. Nothing happens. Thanksgiving, same thing happened. A month later, Christmas and New Year’s holiday, same thing happened. So Bernie Sanders and Ro Khanna warned about it for almost a year, telling him, you have to do it and laying out what he needed to do.

Mike Papantonio: Farron, they gave him the details.

Mike Papantonio: Okay. Ro Khanna and Bernie Sanders said, here, you don’t seem to understand what the hell you’re doing in Department of Transportation. So let us help you. So they said, the problem you got with these airlines is they’ve taken all of this money from the government, remember during the covid issue, billions of dollars. And that, rather than putting it into their infrastructure, rather than taking their computer system that was way, way outdated, especially Southwest Airlines, way outdated. Rather than making improvements, they paid themselves bonuses. They paid themselves dividends. They bought back their own stock. And so this guy knew. They’re, look, Democrats who wanna support Mayor Pete as if he’s really, really a presidential hopeful, come on. I mean, this, this guy has no chance in a president, presidential run. But the, the guys people that wanna support him say, look, he didn’t know. If I hear he didn’t know one more time, I will scream. He clearly knew the details of it, the infrastructure failure, the software failure. They didn’t even buy new software. Every, all the other airlines were buying new software because they said, we’re worried about this. He’s told specifically this airline didn’t do something about it.

Farron Cousins: Well, and you also have the, the airline unions, the, the pilots groups, the flight attendants groups that have been warning Southwest itself for years, saying, your system is so outdated, you can’t even keep track of us. You don’t know where we are.

Farron Cousins: when you need us.

Farron Cousins: And they warned him again, this is gonna cause problems. It’s gonna cause delays. You don’t have a proper system to reach out to us and get us in there. You don’t even have a system like the other airlines do in place for when this flight is canceled, how to reroute it. You’ve done no planning at all for your airline.

Mike Papantonio: Yeah. It’s, it’s even worse than that. It, when you take it down to the, to the, the very basics. You had consumers that paid their fair, they paid exactly what they’re asked to pay. Flight is canceled and they can’t even get a refund. This has been going on for years with Southwest.

Mike Papantonio: And that’s what Ro Khanna and, and, and, and, and, and Bernie Sanders was talking to him about. Look, here’s what bothers me about this. Okay. Why is it that Democrats and Republicans are always looking to create a hero where there is no hero? That’s what they’re doing, doing with this guy. This guy is a mayor. That’s it. He has reached his max as, as far as political potential, he’s a mayor. But nevertheless, you have Democrats out there, oh man, he’s a great presidential hopeful, just like we saw with Avenatti, right?

Mike Papantonio: We saw it with Avenatti, we see it time and time again. We see it with Republican, Republicans and we see it Democrats.

Farron Cousins: Instead of just taking this guy who is just not prepared for this job.

Mike Papantonio: No, he’s not.

Farron Cousins: And what we’ve seen in the last two years has been terrible.

Mike Papantonio: Well, look, both parties are in search of a frigging hero. That’s where we got Donald Trump, for God’s sake.

Mike Papantonio: He’s different. He’s an outsider. He’s, you know, he does, he’s not like the rest of ’em. Let’s create this hero. They created a monster. Democrats and Republicans do it all the time. And this is the best example I can give you. This guy ain’t no contender where it comes to national politics. I can tell you.