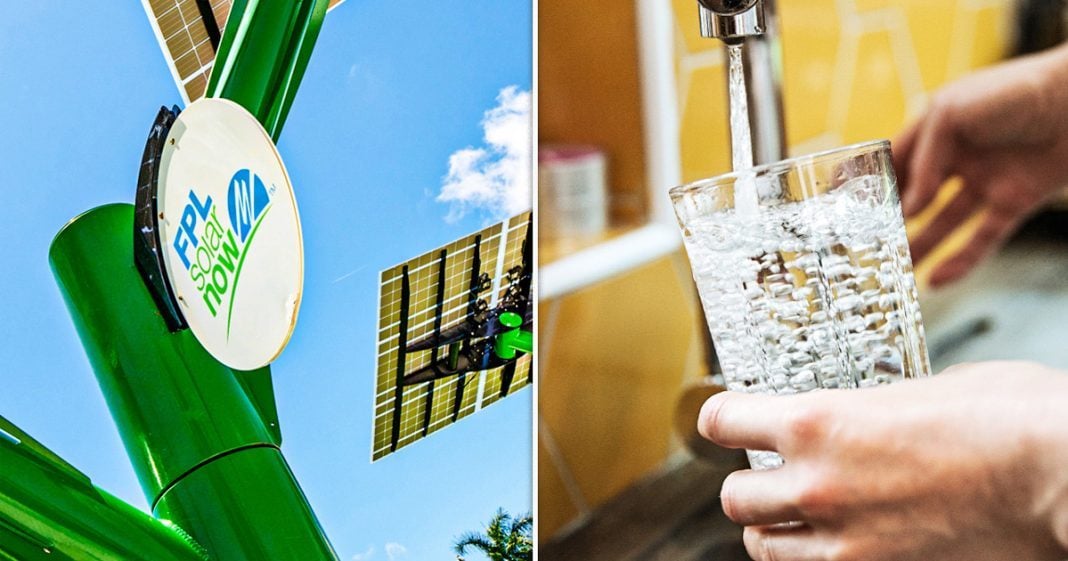 A powerful energy company in Florida has been running a secret lounge used to lobby politicians. Plus, you can now add dangerously contaminated water to the growing list of problems facing California residents. Mike Papantonio & Farron Cousins discuss more.

Mike Papantonio:             A powerful energy company in Florida has been running a secret lounge used to lobby politicians. Wow. Okay. Let me lay it out a little bit. It’s 3000 square feet. It’s hidden from the public. There’s no way that you even know that the Florida Power and Light or NextEra who owns Power and Light, owns this. And this is, this is a, it’s been described by the politicians who go there and the lobbyists who go there as the nicest venue in Tallahassee that some kind, people call Tallanasty because there’s not a lot of venues like they’ve built here.

Farron Cousins:                  Well, and, and it is, you know, the, the media did describe this very aptly as this is as close to the smoke filled back rooms that, you know, we’ve heard legends about as you’re ever going to get, because that is exactly what this is. They bring in lobbyists. They bring in the politicians from right down the street at the Capitol.

Farron Cousins:                  Yeah. They bring in the regulators and they say, hey, come on in, have a couple drinks on me. Look at this nice plush place. You have to have a special employee who has a key card access to even get in. There’s no signage on the outside of the building. So nobody even knows what this place is. But it’s so they can basically rub elbows and tell people, listen, you gotta give us this legislation. We’ll put money in your campaign. We’ll schmooze you. We’ll wine and dine you. Everybody goes home happy.

Mike Papantonio:             And what does it accomplish? It accomplishes in Florida right now you have people that are paying rates, you have, we get calls all the time. Unfortunately, we can’t sue them. They have this weird immunity that doesn’t allow us to sue ’em. Mother of two called couple of weeks ago, Mike, I can’t pay my bill and feed my children. Retirees who are living on a fixed pension that have gone, their bill has gone from $100 to $400 a month. And the regulators who, by the way, hang out at this really ritzy venue where they’re served free liquor, those regulators are the people who said, yeah, you can go ahead and raise your rates $10 billion. It doesn’t make any difference to us. Doesn’t make any difference how you load it. You confronted it, load it, however you wanna do it. And it, it’s just absolute pay to play. That’s what this is.

Mike Papantonio:             It’s not just Florida. You see this, this is NextEra. NextEra is honest to God, they have been caught with their hands in the tilt so many times where they’re clear influencing politicians. In Florida, the question is, are they violating our sunshine laws? Are they violating a, a law that says you can’t simply gift things like liquor and a venue like this to politicians. And you have to report when you’re going to meet with our politicians. That’s what this is. It’s a closed door meeting. And you know what? Taxpayers and consumers are paying for that.

Farron Cousins:                  Well, and what’s even more interesting too, is that even inside this secret floor of this building, where the room exists, there’s also a second secret room.

Mike Papantonio:             Okay. Well, what we know from looking at documents, and again, people don’t understand, I can’t sue them. I get calls all the time. Can you sue them? No, I can’t because of the way the laws are written. But here’s what we do know from the documents we found. There’s a clear effort to influence state electors. They wanna set up news sites to go after critics. They’re doing that right now. They’re actually, they were caught having a private investigator follow a reporter who was critical of them, followed ’em around for months, took pictures. Were just right, you know, right in their front yard, following these, these reporters. They want to, they, they want to go about buying media outlets. They’re doing it right here in North Florida. As you know, we started a campaign against them talking about what bums they were and how they were stealing, you know, from American consume, from Florida consumers. And then what happens? Florida Power and Light comes in, spends a ton of money in the media to say, oh, we’re gonna make you a lot of money if you’ll just stick with us.

Farron Cousins:                  Yeah. And, and, and it’s the buying up, excuse me, of those media outlets that again, is so worrisome here because obviously when you have corporations that come in and buy media outlets, all you get is favorable coverage. So what they’re doing is they’re running a massive propaganda campaign to say, look at us, we’ve done nothing wrong. We’re the good guys in this. They go to their little smoke filled back rooms. They cut the deals with politicians, get everything they’ve ever wanted. I mean, this is mafia like behavior that we’re seeing here.

Mike Papantonio:             And you have to decide, can I buy food for my children? Can I put clothes on their back for school? Or do I pay this bill? And you know what? There, there is no compromise with these folks. You don’t, if you go show up at headquarters and say, I wanna talk to somebody, forget it, forget it. You’re not gonna talk to anybody. And they’re certainly gonna, aren’t gonna cut you any breaks. Here’s the good news. This is some good news. First of all, they’re the, the, you have investment groups that are downgrading the value of their stock. Okay. They’re doing that because they know this is getting ready to blow up. And my advice to people, do not invest into anything having to do with Florida Power and Light or anything having to do with NextEra, because it’s getting ready to get upside down, once all these stories really pick up momentum.

Mike Papantonio:             You can now add dangerously contaminated water to the growing list of horrors in California. Now the reason I think this is, this is a big story, but the reason I think it’s even bigger is because there is this mass exodus from California right now. What 400,000 people in the last year and a half leaving California. It’s not just about water. It’s about, they can’t afford to live there. The, the housing is impossible. The taxes are impossible. The, the crime, the crime of all things is really driving people outta places like LA and San Francisco. And there is this, I’m telling you, it’s this mass exodus if you look at these stories and they’re going to, they’re going to Texas and New Mexico and coming down here to Florida. And what the, the, the angle that you’re hearing, especially in Florida, is you can come here, but leave your politics back in California. And that, that’s what each one of these state, that’s kind of the, that’s kind of the hit on these folks that are making this exodus.

Farron Cousins:                  Well, in fact, that’s actually a lot of the reason a lot of people think that both Nevada and Arizona went blue in the 2020 election is because you had all the California transplants.

Farron Cousins:                  So it’s been happening for years. And, and trust me, look, I have talked to some of the most progressive people imaginable in California and they are saying the same thing. Okay. This, this isn’t a right wing talking point. This isn’t propaganda. The people that live there again, far more progressive than me, they’re saying the same thing. It’s really bad. And maybe, maybe it’s something in the water. I mean, we’re looking at this story too. You got a million people drinking arsenic contaminated water. You’ve got half the state on fire right now.

Mike Papantonio:             The crime wave is a very real deal. I don’t know why they won’t, why they don’t say, yeah, it’s real. I mean, people are leaving San Francisco. I saw an article the other day, CEO one of the biggest corporations in America, gunpoint robbed at his front door of his home.

Mike Papantonio:             He makes this, goes on TV and makes this huge statement says, it’s irreversible. We can’t solve the crime problem. So I mean, this isn’t, this is coming from a whole host of different areas. But back to the water. Water seems to be the last thing. It’s got arsenic in. It has nitrites in it. They’ve suffered from a drought, so there’s not enough water. And then it has PFAS in it as well. So you look at this whole picture and you say, uh, I don’t know, man.

Farron Cousins:                  It’s not exactly the picture of paradise or, you know, this LA high lavish lifestyle that we see on TV. The state’s got real problems. Not to say other states don’t too, but it’s, it’s really piling up really quickly in California.