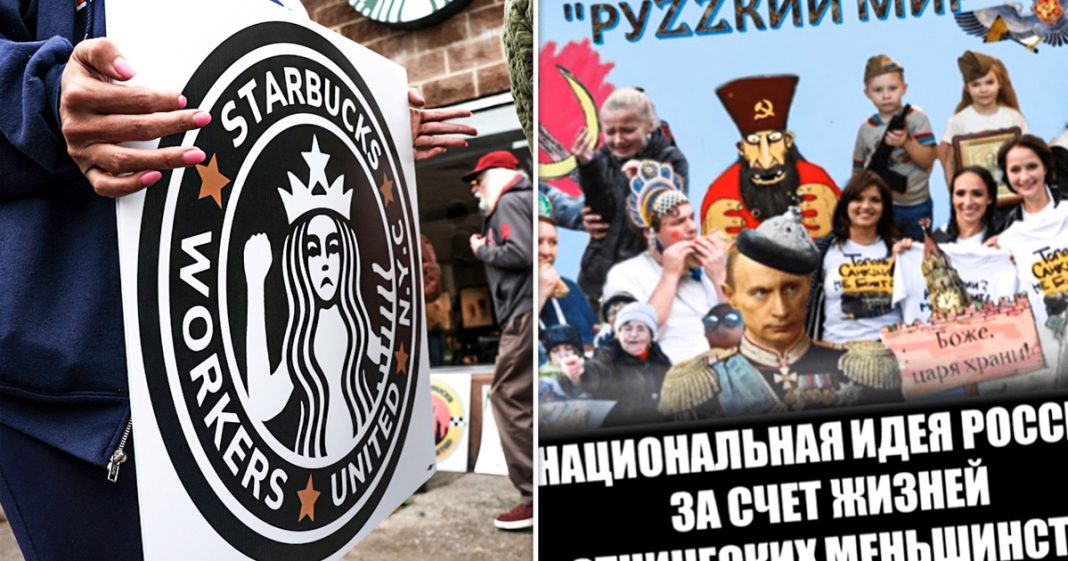 Starbucks is accusing their workers of kidnapping a manager – but all they really did was request better benefits. And, social media sites recently shut down a number of pro-America fake news accounts attacking Russia, China, and Iran. Mike Papantonio & Farron Cousins discuss more.

Mike Papantonio:             Starbucks is accusing their workers of kidnapping a manager, but all they really did was request better benefits. I, I dunno, you read this story and it makes it sound like the manager was held hostage. Like, if you don’t fix this machine, we’re going to never let you go. If you don’t give us benefits, we’re never gonna let you go. But this is part of the spin. Look, let me just tell you something. I have been shocked by how good Starbucks has been at, at pushing back the unions. I mean, they’ve been amazing. They’ve been like the worst of the worst, the people who we talk about all the time that are destroying the possibilities of unionizing. These people are masters at it.

Farron Cousins:                  Yeah. They, they are. And I think at this point they may have gotten a little too greedy with these claims of, of kidnapping of this manager, because they had been doing a, a decent job of systemically getting people to not unionize. Closing stores where they were about to unionize saying, you don’t get the benefits of the unionized workers. So you’re actually getting worse. But this particular instance, there’s full video evidence that these workers in South Carolina united together, went up to the manager and basically wanted better benefits. Go and fight for us, essentially is what they’re telling, because they know the manager can’t unilaterally do it. And the manager says, can, can I just go? And they’re like, well, yeah. I mean the door is right there, dude. If you wanna walk out, walk out. And then Starbucks says, this man was kidnapped.

Mike Papantonio:             His lawyers are tell, I mean, you know, look, I don’t know how they built this. I guess it’s the every man kind of image that they had, where you take your computer, you go drink coffee. You have people that you can talk to every morning that you see there all the time. It was almost like a community. Like a family. Buddy, I’ll tell you what, that’s unwinding by the second. And right now these folks are regarded, really, if you take everybody who’s union busting, Amazon, the whole bunch of ’em, these people have the imperial, they have the imperial data on how to go about doing that.

Farron Cousins:                  It, it is truly disturbing. And you know, again, we’re seeing a big union push here in the United States today, which is wonderful. Something we haven’t seen since the seventies and companies like Starbucks, companies like Amazon, they want to do whatever they can to keep the workers down. And they’ve made it clear to some of these people that have given 15 years of their life, firing them for no reason saying, guess what? You’re expendable. You wanna start a union? We’ll just bring in the next person up.

Mike Papantonio:             Wasn’t this company regarded at one time is the woke company?

Mike Papantonio:             Social media sites recently shut down a number of pro America, fake news accounts. This is such a crazy, attacking Russia and China. Okay. I guess I love this story because the irony is just so thick. The irony is that the US government created fake news media. That, and they, they’d make a, they’d make up a name for something that didn’t exist. This is the American media or Johnson media. They would then with AI, artificial intelligence, create a reporter that would make up the story. And the story was attacking China and attacking Russia through propaganda.

Farron Cousins:                  Right. And they were, you know, posting it in Chinese. They were posting it in Russia. They even did it in, in Iran. And what they did, they didn’t just create the fake name. They created fake people to share it on social media. So what they did was they went through Russian dating sites online. They went through Chinese dating sites. They pulled pictures of people that they thought this is a very attractive person. We put them, this is now our, our writer and our sharer online. Totally fake. But because people saw, oh, well it’s a pretty face. I, I like what this story is saying. And that’s how the propaganda works. And this is exactly, of course what we said, not we said, but everybody said, well, that’s what Russia did in 2016. We’ve been doing it over there since 2012 this report says.

Mike Papantonio:             This has been coming up for a very long time. We are the masters of propaganda. And so, but when we now, you know, what I love about the story is it, it’s a good, it’s a good sign that social media, that the tech industry says, hey, you know, we’re gonna do the same thing to the US government when they do bad. I love that part of this.

Mike Papantonio:             Because it surprised me. You know, the, the, the tech industry is so beholden to the government.

Mike Papantonio:             And when the tech industry says, no, this is so bad where you’ve created jus, it, you know, I don’t, it’s, it’s not a fake news issue. It’s a fake source issue. They’re making up newspapers, they’re making up TV stations, they’re making up reporters, they’re taking celebrities and then taking AI, messing with their face and making ’em look like they’re a real reporter. And then sending that all over China and Russia.

Farron Cousins:                  They copy the entire article and they put it in a new document. They change a couple things to be more propaganda ish.

Farron Cousins:                  And then they post it as their own. So if somebody were to take a snippet of that article and search for it to verify it, they’re gonna see it also pop up on BBC and these other sites and think it’s legitimate, not noticing the subtle changes in there.

Mike Papantonio:             We have, we have a propaganda department and that’s what this is. But the irony is when we say, oh my God, Russia is changing or China’s changing our lives with propaganda. And we know this now. I mean, come on, man.