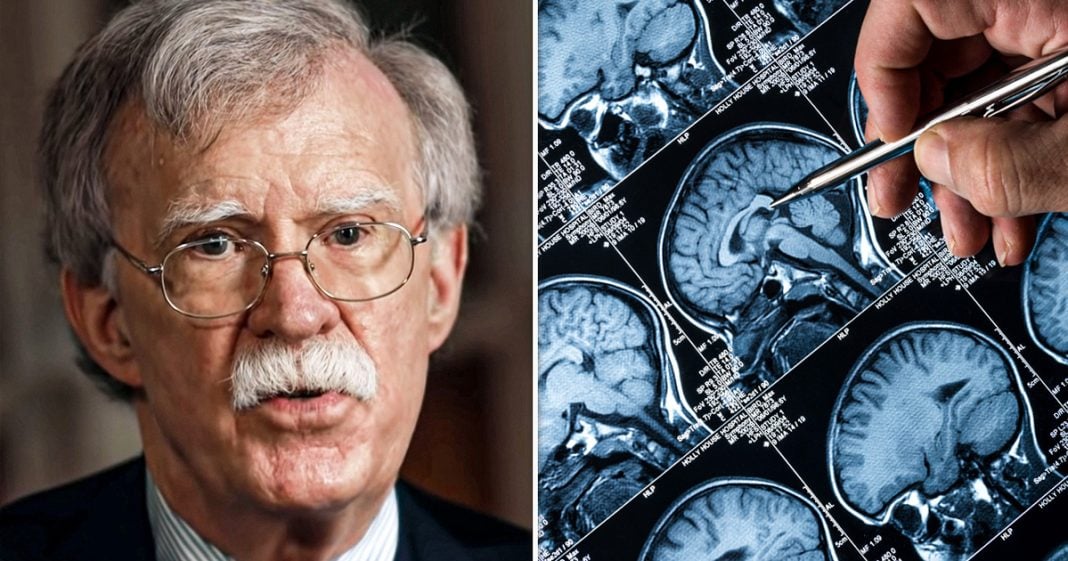 John Bolton recently admitted that he had helped orchestrate coups in other countries on behalf of the US government. Plus, The United States is falling dangerously behind in medical research as other countries make tremendous progress. Mike Papantonio & Farron Cousins discuss more.

Mike Papantonio:             Well, how about, how about, how about they never have, okay. I mean, really this has been going on with this guy. Look, there’s never been a war that Bolton didn’t want, didn’t love. Russia, yeah, let’s go after Russia. China, yeah, we need a war with China. Yemen, he was out front on Yemen. Syria, we need a war with, with Syria. Congo, yeah, we need to invade the Congo. Venezuela, we need to change the, we change leadership in, in Venezuela. And who does he do it for? He does it for all the corporate types, Raytheon and McDonnell Douglas and Boeing. Those are the people that he represents and, and, and, and, and nobody seems to be able to connect the fact that the guy’s a dangerous war pimp, and he’s still walking around in Washington, respected. He’s still showing up on, still showing up on the morning news Sunday mornings.

Farron Cousins:                  I know. And, and to feel confident enough to actually admit this. I mean, we, we’ve all known. I mean, those of us who, who understand eighties politics, going back to Iran Contra, we know who John Bolton is. He was involved in that.

Farron Cousins:                  So he’s been doing this for decades. But for him to now feel confident enough that I can go out there and sit on CNN and talk to the tens of people watching it and say, yeah, I, I did coup d’etats around the globe. What are you gonna do about it?

Mike Papantonio:             Yeah. In, in the Iran Contra, I mean, his whole thing was we gotta stop the Sandinista’s, you know, we gotta get involved. And the truth was, when you look back at it, it was a conflict almost completely driven by the United States.

Mike Papantonio:             And he was the guy behind it. But you know CNN loves him. Have you, sometimes count the number of times you will see this screw ball on CNN where he’s talking world policy and he’s use and, and advertisers love him.

Mike Papantonio:             I mean, Boeing and Raytheon, McDonnell, they love this guy because he’s the guy that’s talking up war all the time, including the war that’s going on right now in Ukraine. He wants to expand the war.

Farron Cousins:                  And, and CNN, you know, when there’s international conflict, that’s about the only time they actually get ratings.

Mike Papantonio:             War, war sells. CNN is the worst of the worst where it comes to selling war and this is their guy right here.

Mike Papantonio:             The United States is falling dangerously behind in medical research as other companies make tremendous progress. Farron, this story about the Cub, about Cuba drugs, Cuban drugs that really are making a difference in Alzheimer’s disease. Now we compare that to what happened with GenTech and what happened with Biogen, GenTech and Biogen lied to the American public for a decade. They said, we have this great Alzheimer’s drug. The, even, even the clinicals were phonied up. But we know the Cubans, the Cuban drug really does work. I mean, there’s, the clinicals are, are first of all, they’re honest, nothing phonied up and it’s working.

Farron Cousins:                  Of their drug trials for this Alzheimer’s and Parkinson’s drug, because it’s showing that, hey, it’s stopping, it is stopping brain deterioration and helping people actually improve their cognitive functions.

Farron Cousins:                  That is amazing. They’re almost, I mean, I don’t want to give too much hope here, but it seems like they’re almost reversing these, these conditions.

Farron Cousins:                  But the US, 20 years, our drug companies that we are funding through the National Institute of Health using taxpayer dollars.

Farron Cousins:                  It’s so, the phoning up was so bad, they weren’t just lying about the results, they were Photoshopping their own images of people’s brains.

Farron Cousins:                  And then they finally looked and said, wait a minute, you just took a picture of a healthy brain and cut out that part and glued it on top.

Mike Papantonio:             Okay. There’s a reason for all this. Okay. And there, we have a 99% failure rate with American, 99%, with American companies that are saying, we’re solving this problem. First of all, they started off with a lie. That, that’s where this all begins.

Farron Cousins:                  Right. So they developed these drugs that attacked these issues that were not the issues.

Farron Cousins:                  And honest to God, the difference here, because it’s not just Cuba, who also, by the way, has a lung cancer vaccine that we’re in the US not allowed to take. So they’ve got this, they’ve got the Parkinson’s treatment, the Alzheimer’s. South Korea has become a leader in medical develop. China, China has taken over.

Farron Cousins:                  It’s because we are profit driven here in the United States. We let big profits, so instead of tackling the real diseases, what are our drug companies doing? We’ll look at the ads on TV. Are you moving your leg a little too much while you sleep? Here’s $500 a month for this drug. It’ll stop your leg movement. Are your eyes a little too scratchy every now and then?

Mike Papantonio:             Okay. And, and here’s, here’s one big difference. When, the best article that I saw that analyzed this, they said, look, there’s a research gap in America that there’s not in some of these other companies, in other countries like Cuba, because the, the, the research is driven by government. Government is hands on, on that research. Academic institutions are hands on with that research. And, and then they tie up the idea that if we compare our kind of what, what you, what you would call is the stem system of education, where they, they, they found out now we don’t, we don’t, we don’t, teach calculus. We don’t teach the kind of advanced biology that people need to have in school. We’ve cut back all of our hard, hard sciences for the most part in public schools. And these, the, the list of comparisons between why we’re, we are where we are in the United States with corporate driven research versus government slash education driven research is a big difference. Isn’t it?

Farron Cousins:                  Well, and, and these big pharmaceutical companies go out there, they headhunt these individuals, the, the smart folks, the scientists, and they say, hey, listen, you’ve got a very promising career ahead of you. How would you like to come make $300,000 a year, fresh outta school with your PhD? Uh, but instead of working on cancer, how about you work on this, you know, a new antacid for us.

Mike Papantonio:             That’s for this week. But all these segments are gonna be available this coming week, right here on this channel. And you can follow us on Twitter, you can follow us @AmericasLawyer. I’m Mike Papantonio and this has been America’s Lawyer where every week we try to tell you the stories that corporate media won’t tell you because their advertisers won’t allow for it and sometimes their political connections won’t allow for it. So we try to avoid all that. We call balls and strikes here. There is no side. There is no Democrat side. There’s no Republican side. It is balls and strikes. It’s not for everybody, but we hope you enjoy it. We’ll see you next time.