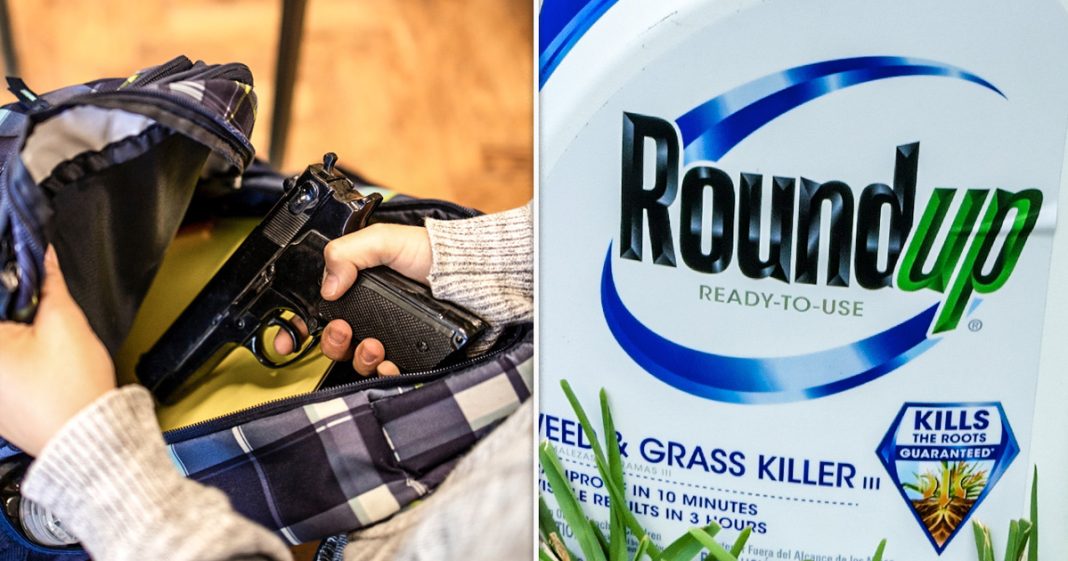 School shootings in America have now hit their highest numbers in over 20 years. Mike Papantonio & Farron Cousins discuss more. Also, the Supreme Court says that Bayer can’t escape liability for the people injured by the popular weedkiller Round Up. Mike Papantonio is joined by journalist & podcast host, Rick Outzen, to discuss.

Mike Papantonio:             School shootings in America have now hit their highest number in over 20 years. Wow, no surprise here. But this was a startling kind of number. This was done, this was done by the National Center of Education and Statistics. What did they find, Farron?

Farron Cousins:                  93 incidents in the 2020, 21 school year, 43 resulted in fatalities, 50 involved injuries. But 93 shootings at schools here in the United States, public and private, which means on a typical 180 day school year, every other day, every other school day in this country, somebody’s getting shot in one of our schools.

Mike Papantonio:             Mm-hmm, mm-hmm. Yeah. And, and the, the, the problem with it is the statistics speak for themselves. I mean, you can’t hide these statistics. These numbers have gone, I mean, they’re startling numbers. This is the highest total in the history of keeping up with these kind of statistics. And you can only hope that look, maybe, maybe some good comes out of the, the, out of the effort to do something. I mean, the red flag law, I love it. You know, can, I love the idea of enhanced background check for people that are under 21. The idea of if you’ve been convicted of abuse of any kind, of spousal abuse, you can’t get a gun and without having to jump through some hoops. The, this is all good stuff that the, the idea of having youth mental health facilities that are, that are improved and expanded.

Farron Cousins:                  Because yeah, we understand we, we got more guns than anybody else. You and I have talked about that. But we also, we gotta get to the root of why this is even happening.

Mike Papantonio:             I think we’ve talked about this on other shows where the, the expansion of social media has also enhanced and almost put on steroid, steroids, the enhancement of bullying.

Mike Papantonio:             If you look at every one of these shooters, you go back, you take a look, they’ve been it’s, it’s the same pattern. You know, they, they’ve been called losers and they, they’re the folks that sit up in their room all day long at home, eight hours a day on, you know, whatever they do. They’re isolated. They’re not really involved in what’s going on around the school or whatever. And so it’s that, in that bullying aspect of social media is now coming to the forefront. Matter of fact, some good friends of mine are bringing some, bringing some cases that I think are going to prevail here. And that it is has, how does social media enhance the ability and, and, and actually promote this notion of bullying? I think there’s, I think there’s something to this and the best article I’ve seen about this overall picture talks about that with each one of these people, each one of these kids that have been involved in this, there’s been some history of that.

Farron Cousins:                  Well, and you know, another part of that too, the other side of it really is that not only are these people experiencing more bullying because of, you know, the online presence, they also have their own communities of people who, you know, kind of have the same issues where they talk about violence.

Farron Cousins:                  Yeah. Message boards and things like that. And, and so you get these people who hype up these feelings of hate that you have. So that’s another big part of it, you know, that’s the second half after.

Farron Cousins:                  And so again, with the mental health screenings and things like that, we, we have to start teaching parents like, look for these signs.

Mike Papantonio:             The Supreme Court says that Bayer can’t escape liability for the people injured by Roundup. Now this first of all, to begin with this is a company, this is Monsanto that was sold to, to Bayer.

Mike Papantonio:             Who, whoever the numb nut was who bought this company. I mean, I hope that person’s been fired and ever, they never worked for the corporation again. They were advised, Bayer was advised to go in and buy Roundup. That was after three major lawsuits had determined that A, the folks, that Monsanto had been lying and phoning up rat studies. They knew that the, they knew that the, the product would cause non-Hodgkin’s lymphoma.

Mike Papantonio:             The information was overwhelming and some, you know, some CEO says, hey, looks like a good idea. We’ll go buy this company.

Mike Papantonio:             He actually had his attorney general do something real significant, which is go before the Supreme Court and say, you know, you should not accept this review. We have all the information we need to understand this is bad, bad stuff. We know glyphosate is killing people all over the world. And, and, and I’m gonna send my attorney general to say, this is a bad idea. Now, Trump, just the opposite. Trump said, no, we oughta, you need to hear this. We need to protect Monsanto. We need to protect Bayer. Now listen, W H O had come out in, 10 years ago now, came out and said, this is bad stuff that’s killing people all over the world in third world countries because we were telling the world, hey, without Roundup, without glyphosate, we’re gonna have a food, food shortage. W H O came out and said, that’s a lie.

Mike Papantonio:             I took five major depositions before, even before the, the first one went to trial. And what we saw was that the, they’re masters of putting their people in important political positions. Matter of fact, they were so good at it that they had, they had three people that were basically running the EPA. They had people in the White House that had come up through the ranks and now were advising Trump about this and that dealing with the product. They were masters of doing that all the way down to the state level. So it doesn’t surprise me. It wasn’t just Mississippi that did that, by the way, there’s about, there’s about 14 states that jumped on the Monsanto bandwagon and said, hey, this is a great idea. That all the information showed that this company knew, knew 50 years before they were selling it, that it was killing rats with and they understood the science. It was non Hodgkin’s lymphoma.

Mike Papantonio:             They phonied it up, they covered it up. And here’s where it really gets ugly. The EPA knew it and they bought into it anyway.

Mike Papantonio:             It’s a latent cancer, non-Hodgkin’s lymphoma. You may be exposed year one and may not have any symptoms for five or six years beyond that.

Mike Papantonio:             So that’s what they, they need to be worried about it. They shouldn’t put the product on. The people who did it should be prosecuted.

Mike Papantonio:             They should be perp walked. And unfortunately, we don’t do that to people that are dressed up in suits.