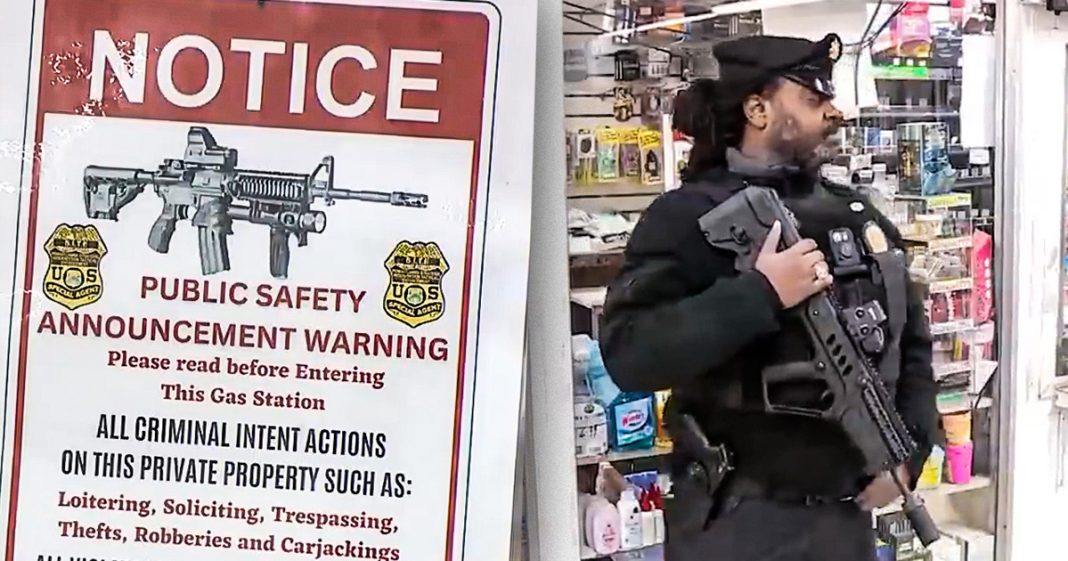 Mike Papantonio: A gas station owner has made headlines after hiring private security, armed police to, to support them and protect them in this crime ravaged Philadelphia. Wow. What in the hell’s going on in Philadelphia?

Farron Cousins: They, they are seeing a, a rapid surge in armed robberies, in, in burglaries. The gas station owner in particular, who I think actually owns a couple different gas stations, he’s had his ATMs in the gas station broken into. His car while he’s parked out there at work, gets broken into. He’s seen muggings. He has seen, you know, he’s had armed robberies in addition. So this guy finally said, listen, I’m done. I’m gonna hire these people walking around with AF-15’s patrolling the parking lot. Which if, if you haven’t seen the videos of these people walking around, it’s truly terrifying.

Farron Cousins: I, I mean, it looks like ISIS has taken over almost.

Mike Papantonio: Yeah. And this is right, kind of in a big, big.

Mike Papantonio: It’s downtown, people walking all around this.

Farron Cousins: But the weirdest part is that the public, 93%, they love it. They’re excited to see that, oh boy, look at this. It’s, it’s terrifying to me. But at the same time, I, you know, I don’t wanna say I, I think it’s a good idea, but I get it.

Mike Papantonio: But okay. Fair enough. I don’t think it’s a good idea, that’s your position. My position is if they don’t do something, is you can’t do nothing.

Mike Papantonio: Obviously the politicians don’t have a clue. It’s just like Chicago. I mean, that mayor running Chicago, what does, she has fifty shootings every week. I mean, is that, that’s kind of, at some point, you have to say something’s wrong here. I think they’re looking in, kind of looking in the wrong places. All, you know, all these recalls for these prosecutors that were appointed by, that Soros was behind. You know, George Soros came in and had all these prosecutors appointed or, or helped him win elections and they’re not prosecuting anybody. The problem, the problem that’s arising out of that is the police are saying, well, why should I even make a, make an arrest?

Farron Cousins: Well see that, that, that’s where my attention goes to, these police. Because the, the gas station owner himself says, listen, I’ve called the police. They’re not doing anything. They’re not showing up. And this is something that we do see across America, depending on where you live. They’ve done plenty of studies on this. If you live in an area that’s a little bit more rundown, the police response time can sometimes be over an hour.

Farron Cousins: If you live in the affluent part of town, the police response is typically within about five minutes.

Farron Cousins: So, you know, the, the police I think are part of the problem here. They, they don’t want to get involved. We’re, well it, it’s easier to take down a, a 15 year old carrying, you know, an ounce of pot.

Farron Cousins: Than go deal with an armed robbery.

Mike Papantonio: There’s simply cities in the country that these, this is what they look like. I mean, this picture up here is how they, they’re presenting at these, at these places.

Farron Cousins: Well, well, and what’s even worse too, you know, we’re talking about crime here, is that the areas of the country that have the most violent crime are actually right down here in the, the deep red south.

Farron Cousins: I mean, these top the list. But those always kind of get overlooked. And, and so I think that’s important to just remind people this is not a localized problem. It is, you know, red states, it’s blue states, it’s everywhere. I, I, I don’t. Look, I wouldn’t stop at a gas station if somebody’s outside with an AR-15. I, I wouldn’t drive down that street ever again.

Mike Papantonio: Are you saying, I’m just telling folks watching, this, get ready for this. This, if you’re living in a place like that, this is what, this is what, no, there’s no business owner that’s not going to say, yeah, I gotta do this. Because what’s it 50, in Philadelphia, there’s been a 50% increase in violent crime, in violent crime at places like gas stations and stores where you think you can just shop without any problem. Not anymore.

Farron Cousins: It, it’s an unpleasant reality that I think a lot of people watching this may be mad to hear about it. But folks, it’s the reality we live in.

Mike Papantonio: Yeah. It, it is.