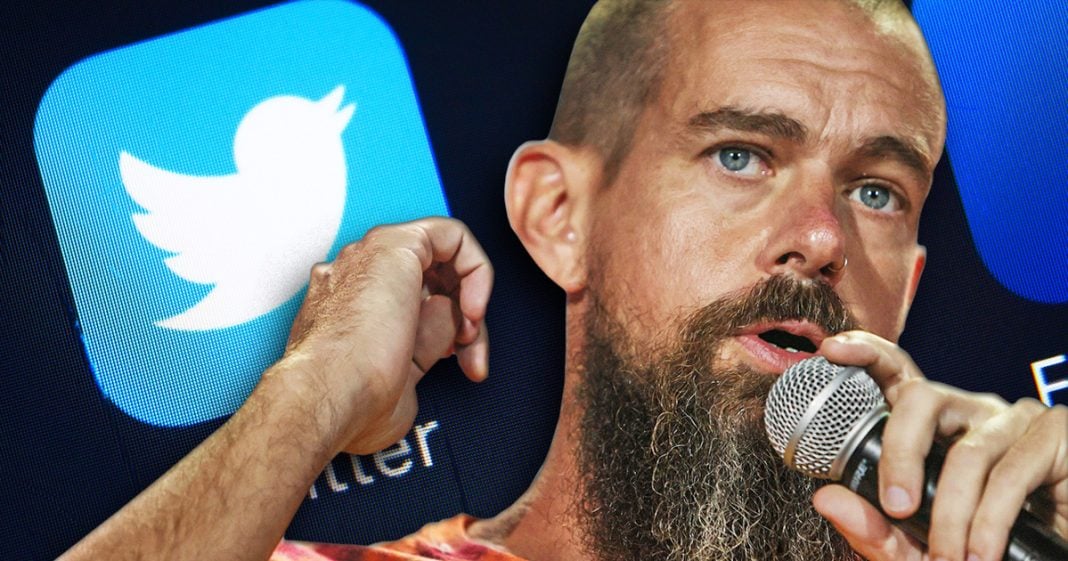 There’s a lot of new information in the recently-released Twitter Files, but the big issue is whether they reveal a cover up that could lead to criminal charges. Mike Papantonio & Farron Cousins discuss more.

Mike Papantonio: There’s a lot of new information in the recently released Twitter files, but the big issue is whether they reveal a coverup that could lead to criminal charges. Ring of Fire’s Farron Cousins joins me to talk about what’s happening on that and a lot of other issues. Farron, there’s a lot of, lot of things going on right now. You know, when I, when I looked at this, the, the Jack Dorsey has a potential problem here. I wanted to go back and see what did he actually tell Congress? Did he, did he commit perjury? Did he lie to Congress? Because there’s case after case where, you know, people are thrown in jail for that.

Mike Papantonio: And so what I looked at, I wanted to see what the actual words were. And one of the questions were asked by a Democrat from Pennsylvania, he asked, was social media, is it rigged to censor conservatives? Is that true of Twitter? And, and he said, no, we’re not censoring people. And then he was asked again, by another, are you censoring people? Dorsey said, no. He was asked again, are you, is there shadow banning going on with Twitter? He said, absolutely not. You know, we’ve all seen it. I, I think of the case as a matter of fact, there’s tons of cases, but the case I think of is Roger Clemons. Talk about the, talk about the similarities here.

Farron Cousins: Yeah. Roger Clemens, as we all know, many, many years ago, was hauled before Congress and asked, you know, are you using steroids in Major League baseball? And he says, absolutely not. Don’t use steroids. Well, we find out later, he is. So technically he lied to Congress. They pursue charges against him. They ultimately got a mistrial and, and acquitted him. But he lied to Congress about something inconsequential. Congress could not have put sanctions on him.

Farron Cousins: For taking steroids. That’s not their job. And it’s the same with Dorsey’s testimony there. If he had just said, yeah, we do it all the time. I can do what I want. It’s my company. Congress could not have done anything to him about it.

Mike Papantonio: Well, explain that. Explain that. He, there, isn’t there’s something in, right in the contract, that says, yeah, I can shadow, I can censor, I can do whatever I wanna do.

Farron Cousins: And Twitter’s own terms of service that are still active today, it says we reserve the right to de-amplify content, to hide content, to limit the availability and, and I forget the exact terminology, but they say, yeah, we can limit things. And if by you’re signing up for Twitter, you agree to let us do that. So he could have said that in that thing. He could have said, you know what? We don’t make it a habit, but it’s right there in our terms of service. If we need to, we can do it.

Mike Papantonio: Is it bad lawyering? Did, did his lawyers say, yeah, go lie to Congress? I mean, this is just three questions. There’s, there’s a lot more.

Mike Papantonio: But there were three questions, and I compare it to Roger Clemens, who was lying about performance enhancing drugs, and yeah, they found him in contempt. And I mean, it’s serious stuff.

Farron Cousins: It, it really is.

Mike Papantonio: So if his lawyer said, yeah, Jack, just lie about it. And I’m wondering whether or not part of that had to do. I, I don’t know, I don’t remember the timing. Did it have anything to do with, just prior to, to Musk coming and making the buy? Was, was there a time element there?

Farron Cousins: This was, this was I think long before.

Mike Papantonio: Yeah, I think it was.

Farron Cousins: Long before Musk was even in the picture at all here.

Mike Papantonio: Yeah, yeah. But, I mean, he, I know that. Did he ever appear after that? I guess I’m wondering, close to it.

Farron Cousins: Not that I’ve seen. But, but as you mentioned, the, the questioning does go on. And what’s interesting is as the questioning goes on, he’s then asked too, like, do they do it for Democrats as well as conservatives?

Farron Cousins: Seeming to already understand like, this guy’s not telling us the truth. And then he said, yes, it does happen to Democrats too. So already with, without any of these files, he already contradicted himself on do we limit the availability of users, but.

Mike Papantonio: Well, well look, either he lied. He just knowingly lied. His lawyer said, who should be sued for malpractice if he, if his, if he had a lawyer there, and the lawyer didn’t say, you know, Jack, this is serious stuff. You can go to prison for this. You know, think about Haldeman and think about Harvey Matusow, think about Caspar Weinberger. Think about all these people that have gone to prison or, you know, had jail sentences at least, whether they’re suspended or not. But he, there’s nothing equivocal about it. Were you shadow boxed? No, I wasn’t. Were you, were you censoring people? No, I wasn’t. And, and, and, and so I’m looking at this and I’m thinking, what the hell. He either lied or he was so out of touch with his own company. What do you think?

Farron Cousins: It’s one of those two. I mean, those really are the only two options at this point, unless he’s trying to play the Bill Clinton, depends on your definition of the word is, because Twitter did come out, I actually read this just a few moments ago.

Farron Cousins: Twitter had come out a couple years ago, shortly after this, and they defined what shadow banning means.

Farron Cousins: And shadow banning, according to Twitter, is when nobody except the person who puts the tweet out there can see it.

Farron Cousins: So if he’s asked, do you shadow ban? Well, I’ve got a different definition of shadow ban. So of course I don’t do that.

Mike Papantonio: Okay. That’s, that’s fine on shadow banning. I gotcha. But when you say, did you censor?

Mike Papantonio: No, I did not. Did you censor according to political ideology? No, I did not. I mean, that’s where this really goes. And I’m just thinking there’s, you know, you know that you’ve, we’ve talked about the number of people who’ve been charged with willful blindness. So it’s either, yes, I was lying, and yeah, I’m caught, or I’m so disconnected from this company. I started growing my beard and smoking pot or whatever the hell, whatever, whatever his new lifestyle, whatever it is. And I was so out of it, I didn’t know what was going on. There’s still something called willful blindness, this guy gotta, he has to overcome.

Farron Cousins: Well, and the big issue to me is, is this is something he didn’t even need to lie about or, or act like he didn’t know anything about.

Mike Papantonio: He should have faced it straight on.

Farron Cousins: He, he could have done that and, and we wouldn’t be having this conversation today. We probably wouldn’t even have the, the Twitter files as they exist now, because they would’ve said, yeah, these things happen. It’s right there in our terms of service. You don’t like it. Go to a different app.

Mike Papantonio: Yeah, exactly. Well, we do it all the time. Somebody comes on our site and they attack you, or they attack me, our position here is you can attack the story.

Mike Papantonio: But you may not attack the people who deliver the story. And if you do, you’re gone. If you do, we unsubscribe you. We get rid of you. That’s our policy. But we, we, we let everybody know. I’m letting them know right now.

Mike Papantonio: I get, you know, if, if they attack you, they can talk about the story all they want, but if they start getting personal and attacking you or attacking me, they’re gone. Doesn’t affect us. Our numbers are great. Doesn’t have any effect on us, but it’s our policy. That’s what the guy needed to say. It’s right here in the policy.

Farron Cousins: Yeah. He, I mean, he could have had a printout of it and just shown it and said, well, this is our policy.

Farron Cousins: Again, do we make it a habit to do this? No, we don’t.

Farron Cousins: But if we feel the need to do it, we’re gonna do it. And we’re allowed to because you agreed to it when you signed up.

Mike Papantonio: I think your point’s really good, Farron. I think you’re right on. It, it, it just didn’t have to happen.