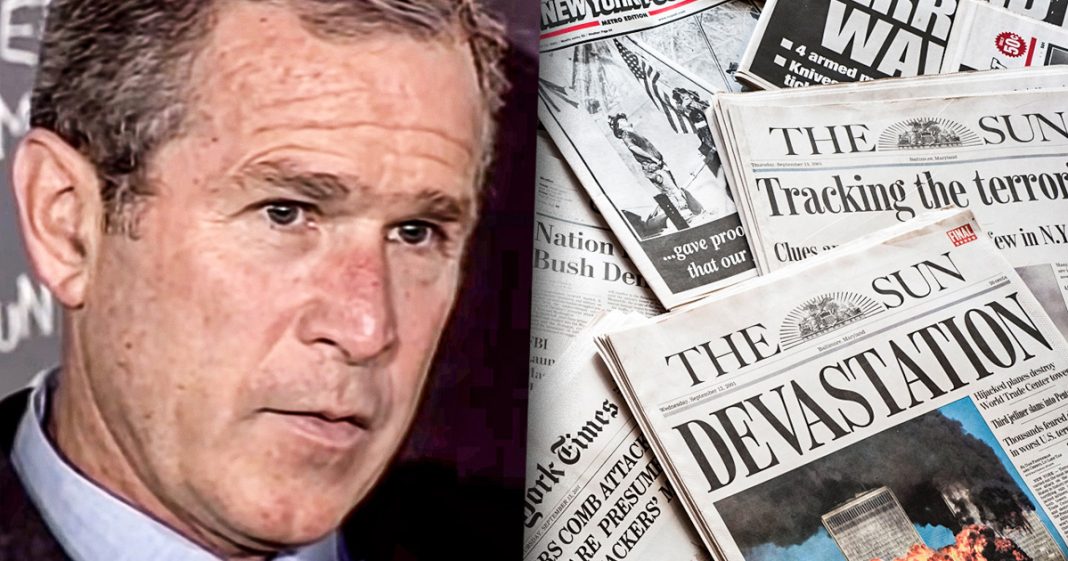 We’re finally getting more information about just how badly President Bush screwed up the warnings about 9/11 before it happened. Mike Papantonio & Farron Cousins discuss more.

Mike Papantonio: Hi, I’m Mike Papantonio and this is America’s Lawyer. New interview documents have been released showing how former President Bush repeatedly downplayed and ignored his failures of 9/11. We’ll, explain what came out in that report. President Biden had Congress step in to prevent a major rail strike and the rail workers, well, they don’t have much to be happy about. And big changes are coming for both parties in Congress. We’ll tell you what to expect. All that and more. It’s all coming up. Don’t go anywhere. America’s Lawyer starts right now.

We’re finally getting more information about just how badly President Bush screwed up the warnings of 9/11, how he completely dropped the ball and caused the murder of 3000 Americans. But now we’re just ignoring it. I’ve got Farron Cousins with me to talk about it. How, how have we rehabilitated? This guy, the, the facts are overwhelming in this new report that he was an idiot. He was a complete buffoon. He ignored warning after warning. But now his, his approval rating is 74% because the media embraced him. When he was going after Trump, they said, ah, this is our new hero. They forgot about the fact that he killed what, a million people?

Mike Papantonio: A million people along with the three, 3000 murders that took place on American soil. Pick it up.

Farron Cousins: Well, he, he’s become the, the lovable dufus. Not, not the grossly incompetent war criminal. He’s the lovable dufus. He wasn’t quite right, but hey, he was funny when he did his little dance that time. No, this man, especially now that these new documents have come out from the interview.

Mike Papantonio: Talk about those documents. This is, this is in your face documents.

Farron Cousins: It, it really is. The 9/11 commission, you know, worked out in April of 2004. We finally get to sit down with Bush and Dick Cheney, find out everything that happened in the run up to 9/11. And what they found out, what George W. Bush told them was, I didn’t, I didn’t know they were serious about these threats. I didn’t, I thought they were talking about he was gonna attack overseas. I, I didn’t know any of this. The CIA director was confusing me.

Farron Cousins: It’s absolutely absurd that this man continued to pass the buck.

Mike Papantonio: How confusing is this? Osama Bin Laden is coming to America to involve himself in terrorist activity. That wasn’t in Europe. Tenet, do you know met with him 40 times, 40 times. Even went to this idiot’s ranch where you remember him out there with this saw, sawing logs while America was falling apart. Went and met with this idiot 40 times and said, look, you need to understand this is real. They’re coming to America to bomb us or to complete, complete some type of terrorist activity. And what he said was, well, I didn’t think it was productive information. I didn’t have enough information. It’s almost like they needed to put a, a cross. Okay, here’s an X, you idiot. This is what they’re gonna blow up. You need to do something about it.

Farron Cousins: Yeah. It wasn’t clear where they were gonna be, what they were gonna do. So, so I just ignored it. Listen, we could have, at that time, through the federal government that he was running, instituted very minor changes to airport security.

Farron Cousins:That could have prevented this. I mean.

Mike Papantonio: They were recommending.

Mike Papantonio: They were recommending these changes.

Farron Cousins: Yeah. And these, again, super minor things that could have been done that likely could have prevented this massive tragedy on our soil. But this idiot didn’t understand it. And I think that’s the point. It’s not just that he downplayed it. He fundamentally couldn’t understand it.

Mike Papantonio: Do you remember they had, Ellen had him on the show. Oh, he’s a wonderful, funny little artist. Like, it’s okay, man, you only killed a million people. You only allowed 3000 Americans to be murdered on soil because you’re too lazy to do your job. All of a sudden he’s the darling of the Democrats. Why? Because he took the time to attack Bush, to, to attack Trump. Look, this is not me and you talking. This is not supposition. These are declassified documents that finally are declassified. Talk about how he, how he kept them secret. Yeah.

Farron Cousins: This, the whole 9/11 commission report, and George W. Bush, none of them wanted to point fingers at anyone. So that played a large role in keeping these documents secret. Obviously it was in an election year that Bush clearly should have lost. And if this had come out, he would have.

Mike Papantonio: He would have. Oh, he would’ve lost, there’s no question.

Farron Cousins: This increased military budget for the war contractors.

Farron Cousins: This 9/11 commission, by not placing the blame on him said, oh, it’s the agency failures.

Farron Cousins: Let’s give them $800 billion to fix it.

Farron Cousins: That, that’s, that’s one of the big take aways, for me.

Mike Papantonio: It was all about the money.

Mike Papantonio: It, it, the report, the FBI, the FBI conducted 70 independent investigations of Bin Laden and could not figure out that the guy was a crazy loose cannon that wanted to create terror in the United States. 70 investigations. Again, Tenet meets with this bumpkin 40 times and says, look, this is real. Put your saw down. Put, put your, put your saw down for a minute. Ignore your horses. Let’s not talk about golf for just a minute. And I, I don’t wanna hear about daddy’s accomplishments. Let’s talk, you and I talk. This is really happening. That’s how crazy this was. And Tenet was just so frustrated. He said, I don’t know what else to do. I just have no idea, what, I don’t know what else to do. Now, when he took over office the second, second term, I don’t wanna look further into this because it’s not productive to assign blame. That was his quote after he took office the second time. But beyond me, I, I swear it, I can’t even get my arms around it. How all of a sudden he is the new Democrat darling.

Mike Papantonio: Killed a million people, plus 3000 Americans murdered on soil because of his sheer incompetence. But that’s okay. Let’s put him on Ellen and hell, let’s put him on, you know, the, the, the talk shows during the day and talk about what a cute little bumpkin he is. Nothing cute about this story.