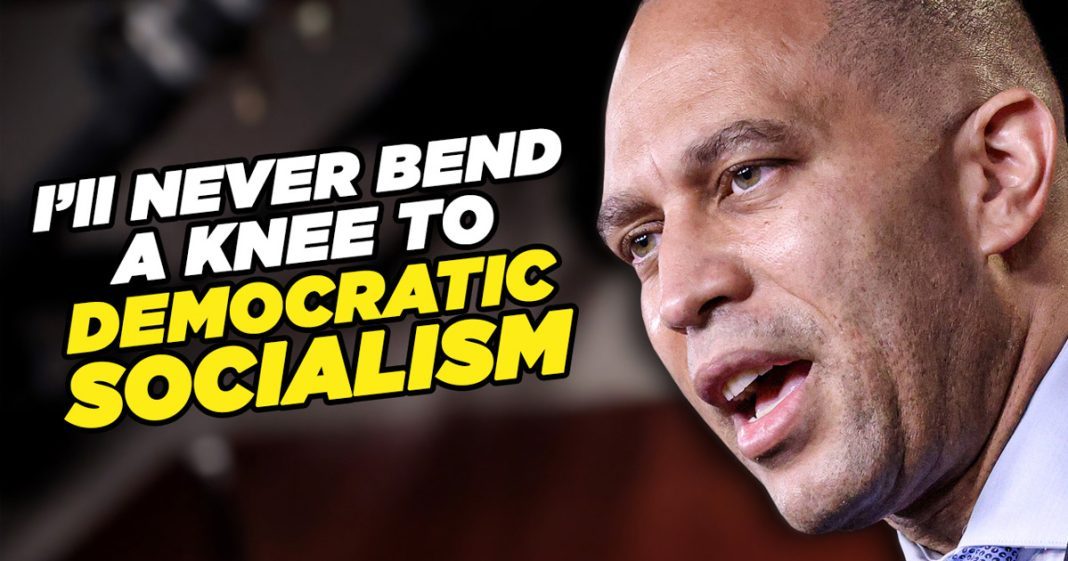 Nancy Pelosi’s successor has been announced, but it looks like just more of the same for the Democrats. Mike Papantonio & Farron Cousins discuss more.

Mike Papantonio: Nancy Pelosi’s successor has been announced, but it looks like just more the same for Democrats. God bless, I just thought we’d get a break here. Did we get one?

Farron Cousins: We did not. We got Representative Hakeem Jeffries, who is 30 years younger than Pelosi, so that, you know, he’s got that going for him. But other than that, he ticks off every single box of being nothing more than another corporate political hack. You know, he came from a corporate defense law firm. Something we always talk about with these people. They stay loyal to them. He’s the top recipient of hedge fund money in the House. All kinds of other corporations. He’s voted against, you know, things like the Green New Deal. He won’t sign onto it. Just a very run of the mill corporate right wing Democrat.

Mike Papantonio: Why do we get the best stories, this is, this is another, we’ve done two Common Dreams stories here today.

Mike Papantonio: That weren’t reported anywhere else. Common Dreams, Norman Solomon. Good, good, it gives, it, it’s a, it’s an op-ed by Norman Solomon. He says, wait just a second. This Jeffries guy, this is nothing like you’re expecting. He is so far away from AOC or anything progressive, it’ll make your head spin. He, there, he’s described as a Clinton corporate Democrat, a Clinton corporate Democrat. You know, Clinton’s the guy that brought us NAFTA, destroyed unions. That was okay with the Democrats. They just adjusted. That was okay that he gave us the landmark crime bill that housed more people because it was the advent of corporate prisons. That’s what Bill Clinton lost, left us. Wall Street deregulations brought on the two eight, 2008 meltdown. You’ve got the, he created, he created havoc where it comes to prevent, to progressive issues. That’s what Clinton did. This guy is Clinton on steroids.

Farron Cousins: He really is. And Clinton also gave us the Telecommunications Act, which.

Farron Cousins: It helped conform the consolidated corporate media. But look, Jeffries, it’s not the progressive, it’s not the kind of person the Democrats really should have gone with at this moment. What they’ve elected is basically 30 more years of another version of Nancy Pelosi because this guy isn’t a fighter. He’s great at raising money, which is what Pelosi’s biggest strength was. And that appears to be all they care about.

Farron Cousins: When it comes to actually doing a, writing a piece of legislation to help the American public, to help struggling families, this is not the guy, he is not the savior. We still have to look elsewhere.

Mike Papantonio: If you go down the list of issues progressive that he voted against, it is staggering. I mean, all, and Pelosi knows this. She came up with the housing bill in New York. The guy comes out and votes against it. That’s just fair housing where they wanna, we need to check.

Farron Cousins: And that’s his area.

Farron Cousins: He’s like, I’m not even gonna help my people.

Mike Papantonio: And oh, by the way, while that’s happening, he gets more hedge fund money than any Democrat up in Washington right now. Hedge fund money. So you think Wall Street loves him because he cares about progressives or do you think they love him because this is the new Democrat, the corporate Democrat? That’s what we have here is the corporate Democrat. And it’s just a rework. It’s a rework of Bill Clinton, isn’t it?

Farron Cousins: It, it, it is. And what we can expect, obviously more pushback against the progressives, which is one thing he’s actually on record as saying, you know.

Mike Papantonio: Yeah. Talk about that. I missed that whole thing.

Farron Cousins: He’s, there will never be a moment where I bend the knee to hard left Democratic socialism.

Mike Papantonio: She, he is the future of the Democratic Party.

Farron Cousins: There, there’s a ton of bright stars in the House.

Mike Papantonio: Oh, there’s so many.

Farron Cousins: I mean, you could have gone with a Ro Khanna, a Katie Porter, a Ted Lieu.

Farron Cousins: Do you know, let me put it this way. The Republicans spent 8 million to unseat Katie Porter.

Farron Cousins: They don’t want her there. And she, she eked one out. It was tough.

Farron Cousins: But she got it.

Mike Papantonio: Well, she, she’s at the other hemisphere of this Jeffries cat that’s gonna be leading the Democrats now.