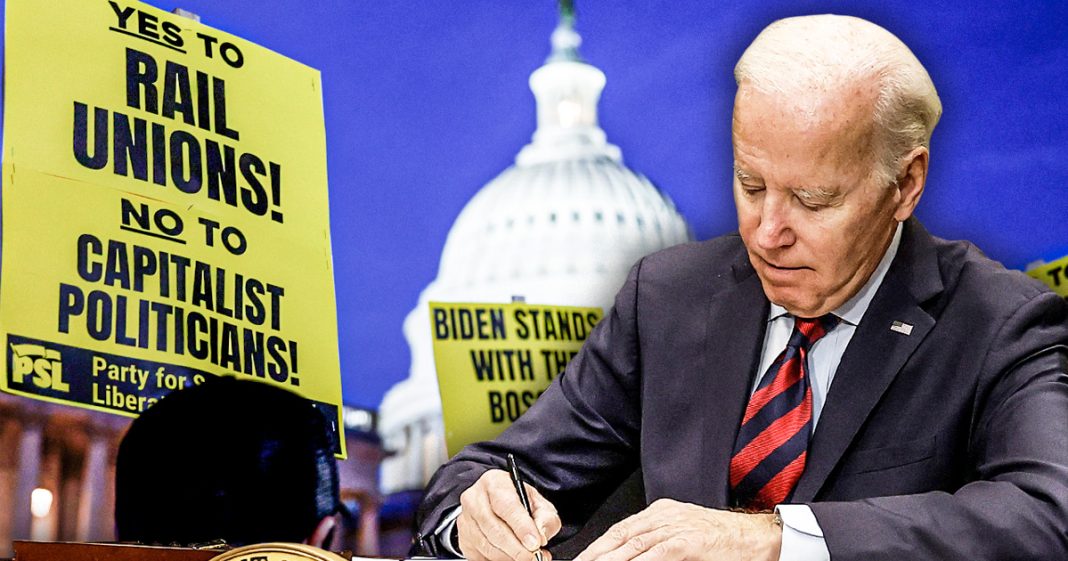 President Biden stepped in to avert a massive rail strike, but workers got very little out of the deal. Mike Papantonio & Farron Cousins discuss more.

Mike Papantonio: President Biden stepped in to avert a massive rail strike. But workers, they got the really, really bad end of this deal. Is there any way to dress this up? I mean, for God’s sakes, Biden says, remember when he came in as the union guy and he’s going all over the country, I’m big on unions, blah blah.

Farron Cousins: And big on trains, he was the train guy.

Mike Papantonio: Big on trains. I love trains because I’ve care. Yeah. That was his line. I go back and forth on a train every day. I love trains. Tell ’em what he did to the train people.

Farron Cousins: Uh, we were looking down the barrel of a massive rail strike because the rail workers, when you look at how they’ve been treated, oh my God, it, it’s on par with Amazon, almost. These people were not allowed to take a day off. They weren’t guaranteed any sick days whatsoever. Benefits were garbage. Pay was garbage. They wanted better and they deserved better. Our economy depends on these people. $2 billion a day we were gonna lose as a country if this strike went forward. And so Biden goes to Congress and says, listen guys, we gotta avert this strike. But rather than doing anything, you know, passing legislation to help these workers, they basically give them nothing. All they do is they pass something that says you can’t go on strike. You have to accept the deal the rail companies put forward, which by the, this is so sick. The, the final one that.

Farron Cousins: Yeah. The final one that passed, they did, of course the House did pass that, oh we’ll give you seven day sick leave. But it was a separate piece that they knew would fail in the Senate, which is why they did it. This is the agreement that was passed, but the workers rejected. It does not include a single day of paid sick leave and would only allow three penalty free days off per year for medical visits. But even that time off is heavily constrained. It’s unpaid. Can only be taken on a Tuesday, Wednesday, or Thursday. Must be scheduled at least 30 days in advance. So many hoops you have to jump through.

Mike Papantonio: I know I’m, I’m gonna be sick 30 days from now, so let me go ahead and put you on notice.

Mike Papantonio: Yeah. Because not Friday. Not Thursday or Friday.

Farron Cousins: But they made them do it.

Mike Papantonio: Okay. Why? I mean, I mean, I, you know, I’m going to get all this Papantonio’s gone to the right again because I’m talking about their president. It, you know, again, I’m not Democrat. I’m not Republican. I’m sure not Republican. But you gotta talk about the fact this guy ran on the idea, I’m gonna, I’m the union guy. I’m gonna bring life back to the union. This ain’t life back to the union, brother.

Farron Cousins: No. These workers are absolutely sickened over what has happened with this deal. They had the collective bargaining power. They are an established union. They’re not trying to form one. They’ve got it. So they had the power. They had the power to grind the economy to a halt, which yeah, it would’ve hurt us, but that’s why they stepped in. We can’t take another hit to our economy. It’s already in the toilet.

Mike Papantonio: Record profits these railways are making, record, record profits. And they say to these people, well, we can’t get you a legitimate sick day. I mean, unless you do all this stuff that they know is never gonna happen. And they have to negotiate. They have to say, well, we can’t overreach because the Senate’s not gonna approve it. He could. He could go and say, this is important to what I ran on. This is who I’m supposed to be. Again, Farron, I think it comes down to, I can’t blame everything on him all the time. It’s the people that he’s surrounded himself with.