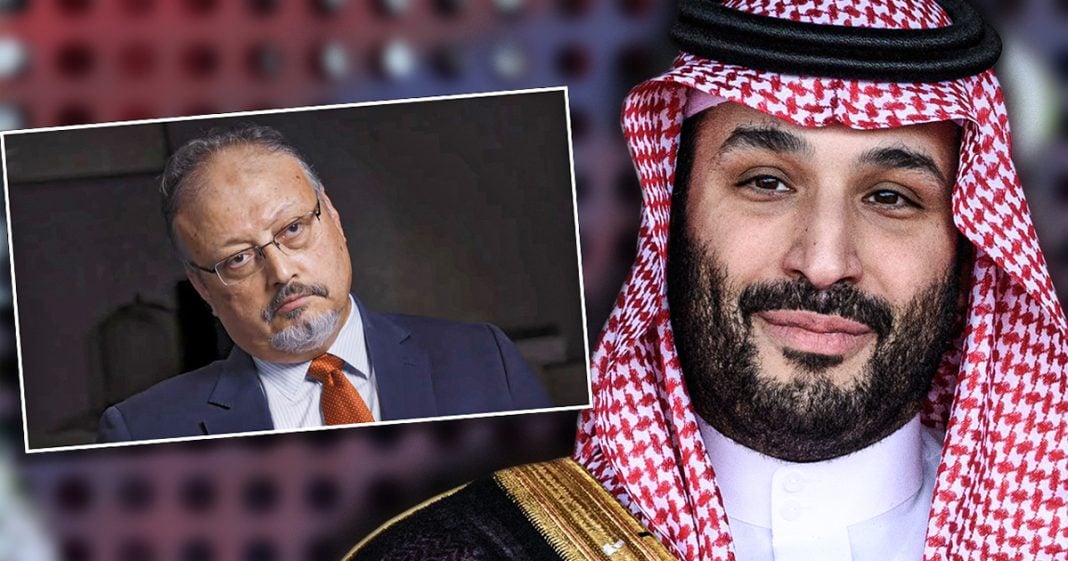 The Biden administration came out recently and said that the Saudi Crown Prince is IMMUNE from being prosecuted for murdering journalist Jamal Khashoggi. Mike Papantonio & Farron Cousins discuss more.

Mike Papantonio: The Biden administration came out recently and said that the Saudi Crown Prince is immune from being prosecuted for murdering journalist Jamal Khashoggi, Ring of Fire’s Farron Cousins joins me now to talk about that and other issues. Farron, you know, we almost called this right. We’ve, we did, I can’t even count the stories we’ve done on this mutt of a dictator, but, you know, the, the problem I’m having with this is when Biden was running, he is, we’ve gotta do something about these predators. I forget what he called ’em. It was pretty ugly language.

Farron Cousins: On the world stage.

Mike Papantonio: This is a troubling story.

Farron Cousins: It’s a truly disgusting story because as you said, as the Crown prince, he’s not immune from anything. Only a head of state would be immune, which I still think is a very stupid policy. But either way, the Royal family said, okay, we, we know you’re gonna be prosecuted. We know that they’ve already determined you authorized this killing. You were behind it, so we’re just gonna make you Prime Minister. Usually that’s only reserved for the king of Saudi Arabia. But they went ahead, passed it on to the son here so that he could not be prosecuted, again, under this very stupid policy where we say that, oh, you can kill whoever you want, but if you have this title, there’s nothing we can legally do about it. That’s, that’s absurd.

Mike Papantonio: Okay. Here, I want to come back and say what I’ve said so many times. We, we talk about the Biden administration, but truthfully, he has advisors around him. He has people that are saying, yeah, that’s a good idea. Let’s give this dictator who has mowed down more, more folks than we can count for simply pledging, pledging that they need to end this ugly little bit of politics called crown politics, disappeared, lost their heads. We’ve known that whole history. Biden knows that and instinctively Biden came out and he said, we’re not gonna let that happen. But then politics takes over. His advisors say, this is a good idea. It’s a terrible idea. And, you know, the truth is, as this story goes forward, it seems to be getting worse and worse because people keep digging and digging into how this came about.

Farron Cousins: Well, and it’s truly disturbing as well, because Biden went to Saudi Arabia, as we talked about many weeks ago over the summer, begged them, please, OPEC, do something about gas prices. And they basically laughed in his face. They said, we’re not gonna do anything at all. We’re gonna cut production, actually. And so when we need a favor from them, they are not there to help us one bit. But everything they need, whether it’s weapons, whether it’s military support and training, we bend over backwards to give it to this government of Saudi Arabia and it’s to our own detriment. We get nothing in return and they are abusing this relationship.

Mike Papantonio: Yeah. It’s like a cash cow for the weapons industry. Okay.

Mike Papantonio: Everybody for oil, oil, oil. No, it’s not oil, it’s weapons.

Mike Papantonio: Our, you know, Boeing, Raytheon, all of them are making a ton of money selling to this punk who by all right, what do they call him, they call him the wild bear or something, which is a huge insult to him. He gets really mad when you call him the wild bear. Well, that means something over. It means that he’s out of control. And, and truthfully, I know that Biden didn’t call the Justice Department and say, hey, let’s really work to give this guy an unlimited license to kill, but that’s what they’ve done.