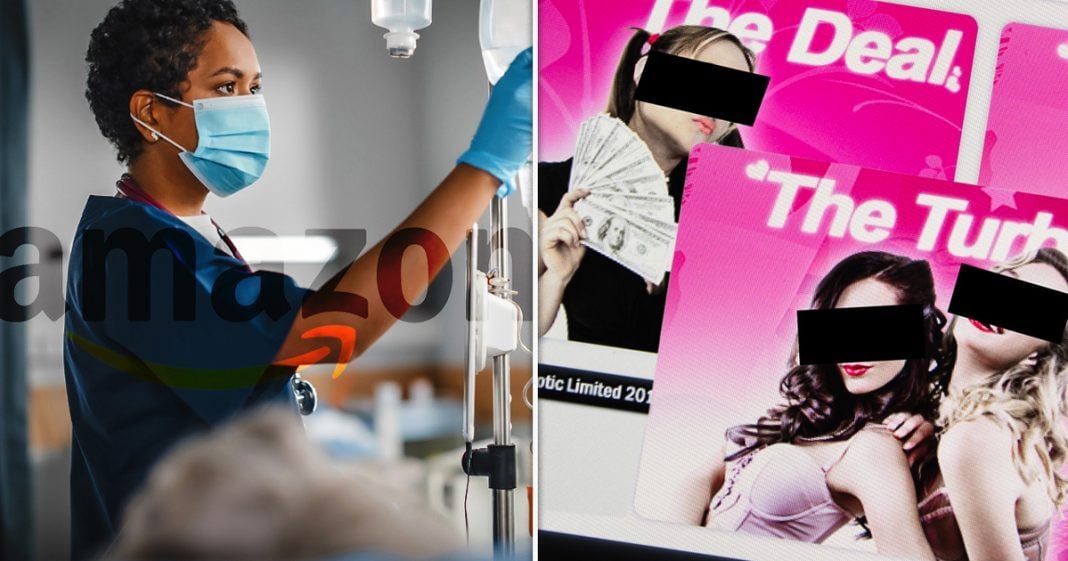 Amazon is getting into the healthcare business by purchasing a group of medical clinics. Mike Papantonio & Farron Cousins discuss more. Also, there were lots of positive developments involving human trafficking litigation this week. Mike Papantonio is joined by attorney Carissa Phelps to explain what’s happening.

Mike Papantonio:             Amazon is getting into the healthcare business by purchasing a group of medical clinics. Whoa, this is, soon as I saw this, I said, wow, this is gonna go bad fast. Give me your take.

Farron Cousins:                  Because Amazon, one of the worst corporate abusers in the country, is gonna be taking over what, 180 medical clinics across the country.

Farron Cousins:                  I mean, something has to be done, is my initial reaction. You can’t just allow this corporate behemoth to, to sell you everything from toilet paper to prescription drugs, to, you know, web services for the United States military. This is nuts that we’re just letting Amazon take everything over. Oh and by the way, he also owns the Washington Post.

Mike Papantonio:             Yeah. Well, this virtue signaling that Amazon’s doing is really repulsive. Their virtue signaling is, well, we wanna reinvent medical care because the elderly aren’t getting their medical care they need. And our employees aren’t getting the medical care they need. You think? Because you’re not providing it. But at any rate, they, really what they want to do, it’s all about tying in to that $4 trillion healthcare, that’s what’s spent in healthcare every year, four, $4 trillion. That’s what it’s all about. So as you said, 180 medical offices, 25 US markets gonna be affected by it, for 8,000 companies. They’re going to be looking to bring in 8,000 companies into their umbrella, to where they say, we’ll take care of your employees the same way we take care of our employees.

Farron Cousins:                  For Amazon shareholders. But for everybody else, it’s gonna degrade the quality of healthcare and it’s gonna put more people, most likely getting prescriptions they don’t need. So Amazon who apparently three years ago got into the prescription drug market.

Mike Papantonio:             There were lots of positive developments involving human trafficking litigation this week and joining me to talk about this is Carissa Phelps. Carissa, you might not remember, but the first time you and I met and we started talking about human trafficking, my theory was you have to go to where the money is.

Mike Papantonio:             I said, you gotta go to the hotels. You gotta go to Wall Street and you have to go to the credit cards that make all this happen. Big victory and you have been working this case for, you know, years now. And I, what I love about it is every now and then the good guys win. That’s the case here, isn’t it?

Carissa Phelps:                  Well, a judge’s ruling said, Visa, you’re gonna stay in. You’re gonna be accountable for your actions to a victim. And that’s Serena Fleites, I hope I’m saying her name correctly.

Carissa Phelps:                  But she’s, she’s not our client particularly, but we’re behind this case. We really support it. We have a, you know, common defendant and we’re, we’re really excited that the judge is seeing it too. That these businesses don’t exist alone.

Carissa Phelps:                  Somebody doesn’t just get exploited and not get marketed without the help of so many businesses.

Carissa Phelps:                  Payment, processors, lighting equipment, like you said, location services, and then the web hosting and all of that too. So what this judge is saying in the Fleites case is, in the civil case is, you’re gonna be accountable. And, and not only that, but the more you know, the more you’re going to be accountable as it should be, right?

Mike Papantonio:             And the cases that you’re working and you’re working some interesting cases where you’re, you’re handling part of the trucking case that was, got my attention initially, when you started talking to us about this law firm handling these cases. But that’s where they put girls in a, in, in, in 18 wheelers in California. And they bring ’em across the country. And they’re all along the way they’re stopping at truck stops and they’re saying, hey, we’ve got a carload full of underage girls, meet us at the truck stop, have sex with them and go home. That, you know, that’s pretty ugly stuff. And it, but the, the public doesn’t understand that in order for that to happen, there are, there’s trucking companies. There’s credit cards. There’s hotel rooms. There’s truck stops that allow it to happen. All of it is part, as you point out, it’s part of an ecosystem, isn’t it?

Carissa Phelps:                  Right. And the, and the really frightening thing is the, the data now, the way that we stream data and the way that trafficking is happening over this last two year period, with all the lockdowns and everything we’ve experienced. Traffickers have stepped up their way of exploiting and making money. And so we see victims contacting us that are on these webcaming sites.

Carissa Phelps:                  But exactly what you’re talking about is happening now over, over the internet. Over, and, and in a way it’s sometimes it’s more exploitive because it’s happening over and over and over again, over these videos, right? It’s not just one time being sold. Not that, that is bad enough. That is bad enough. Speaking from my own personal experience. It just, even one time being sold is bad enough. But to have that repeated again and again and again, on video, and to have, not have the ability to take that down or take that off of the web and not have people accountable is, is horrendous.

Mike Papantonio:             Before you went to MBA school, before you went to law school and got your degree, you were trafficked. This is very, this is material that you’re really familiar with. And I know when you talk to me about it, the thing that strikes me most is this is a commodity that’s a use, reusable commodity. If somebody’s selling drugs, they sell cocaine one time. That’s the one time they can sell it. If they’re selling, if they’re selling 14, 15, 16 year old girls, they sell ’em again and again and again. So I, I, the other thing, I, I don’t think we can end this show without talking about MindGeek. I just have to.

Mike Papantonio:             The first time you and I talked about MindGeek, you had given me the connections to Wall Street. You had said, Pap, take a look at these connections. And we did.

Mike Papantonio:             We looked at the connections and we found that a company like MindGeek, which is a Canadian company, they were, they were actually being investigated by parliament, right?

Mike Papantonio:             And they, they were the ones that were calling traffickers saying, do you have a 14 year old girl you can rape in a hotel room and then send us the film? Pick it up from there.

Carissa Phelps:                  Well, it doesn’t even require a phone call anymore. That’s the problem, is that this is exponential, right? They know what’s going to hit on their site and what search terms to use, not just to create more users so they could have more advertising revenue, but also because they want to develop these patterns of kind of addiction to the pornography, that they can then get more users watching more of the time and make more revenue for themselves.

Mike Papantonio:             Carissa, when we, when we brought you on to, as a partner in our law firm, the thing, the vision that you had was we have to stop, we have to stop the trafficking issue by taking the money away.

Mike Papantonio:             This Visa card issue is one of those steps. The hotel cases that you’re already winning. That’s part of the step. The, the Wall Street connections with some of the biggest funds in Wall Street. That’s the connection. It’s amazing what we’ve accomplished with your theories just in about two years. So.

Mike Papantonio:             Yeah. That’s all for this week, but all these segments are gonna be available this coming week right here on this channel. And you can follow us on Twitter @AmericasLawyer. I’m Mike Papantonio and this is America’s Lawyer where every week we tell you stories that corporate media just refuse to tell because their advertisers won’t let ’em tell those stories or their political connections won’t allow for it. They’re too connected to a particular political party. So you don’t hear these stories. We’re never gonna have that problem. So we’ll see you next time.