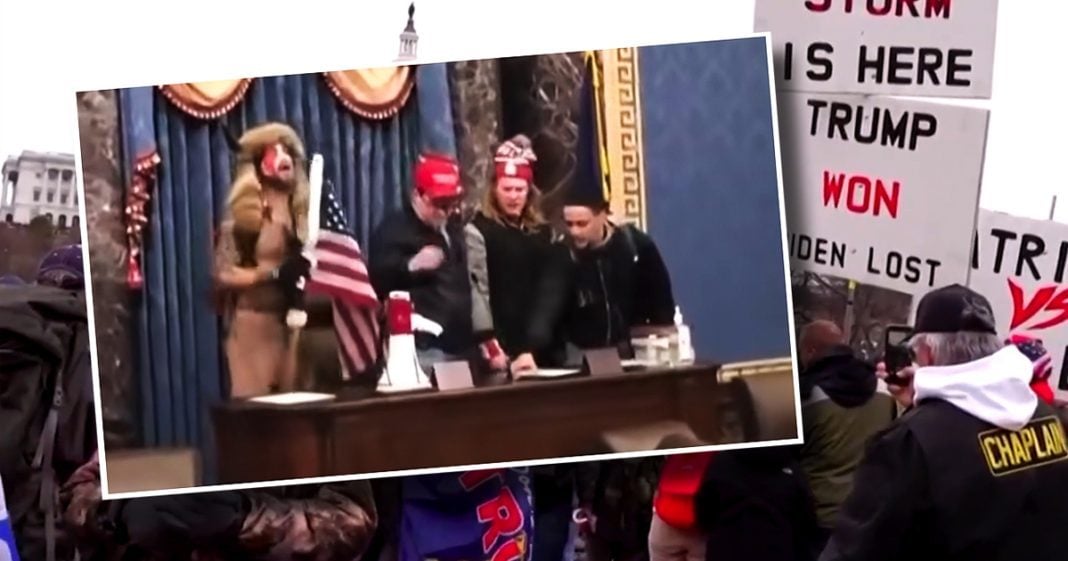 A Capitol Rioter was busted after documenting his crimes in his day planner and another Capitol rioter who dressed up as a caveman on January 6th has been sentenced to 8 months in jail for his behavior that day. Mike Papantonio & Farron Cousins discuss more.

A Capitol rioter was busted after documenting his crimes in his daily planner. You know, some stories you read and I almost, I, I just, this story just cracked me up, this 70, this what, 71 year old man, he’s keeping a daily planner of all the crimes he’s committing January 6th at the Capitol. Pick it up from there.

Mike Papantonio:             Okay. So, you know, let me take the lawyer. How do you defend it? I mean, he’s doing the work for the police and all they do is they take the video, right. They’re video and all this. They’re saying, okay, does this match up to this guy says he’s, you know, pepper sprayed. This guy was such a nut he started beating on one of the police officers with a pole.

Farron Cousins:                  Right. That’s how stupid so many of these people are. And, and this honestly I’ve, I’ve reported on all of these that I can because they are so hilarious to me. This is the dumbest, I, I gotta tell you this guy right here.

Mike Papantonio:             A Capitol rioter who dressed up as a caveman on January 6th has been sentenced to eight months in jail for his behavior that day. Now, last week we did this story. You found this story, it was a wonderful story about this Capitol rioter, January 6th, who kept a, he kept a log.

Mike Papantonio:             Today I did this. Today I did that and, you know, right on the grounds and I did all these terrible things. And they used that to prosecute him. This guy is a judge’s son, right?

Mike Papantonio:             Up in Brooklyn. He dresses, I mean, just look at this guy. This, this is what, this is what unfortunately, progressives have to overcome when they do it, but it doesn’t seem to bother the GOP when this is, this is the picture. This is who we’ve become on the GOP side. And so take it from there.

Farron Cousins:                  Well, I, I, I love the fact that in this, in the decision, in the prosecution’s arguments, they pointed out exactly what I was thinking when I saw this story, this individual was living in a fantasy. And, and I don’t even know if he fully comprehends just how serious what he did was and I think that’s this case with a lot of these Capitol rioters. I mean, look, I got no problem with the convictions at all, but I think some of these people need more than just jail.

Mike Papantonio:             Comes in like a Viking. Okay. So here’s what hurts both parties. This is the extreme that the, that’s published for the Republicans. The same thing is over there with the Democrats. I mean, if you talk about, you know, freakish looking characters, but it doesn’t take many photographs like that to where you say, yeah, that’s what the GOP has become. So, so tell me, where did this land for this guy? Where’s he going?

Farron Cousins:                  Well, he’s, he’s going to prison for eight months and I, I, I hope they understand that, look, just simply locking these folks away doesn’t do much of anything. And, and even this guy had mentioned to his friends on, on an encrypted app, he said, yeah, listen, look, I did all this, but don’t worry.

Farron Cousins:                  Well, it, it didn’t work out so well for him. But no, I think these people need deep, psychological help and, and, you know, get to the root of why they because everybody always says, well, they got swept up in the moment.

Mike Papantonio:             I kind of like the Democrat side of the, of crazy. They dress up like super heroes. You know, I like the whole super hero thing, but it’s still peculiar. It’s still odd. And somebody that says, wow, is this what they’ve become? Is this what the GOP’s become? That’s the question. Farron Cousins, thank you, another great week. Appreciate your input.

Mike Papantonio:             That’s all for this week. But you can find all of today’s videos on YouTube channel at youtube.com/the ring of fire. And the videos are gonna be posted throughout the week. And you can follow us on Twitter @americaslawyer. I’m Mike Papantonio and this has been America’s Lawyer where we tell you the stories that corporate media won’t tell you because their advertisers don’t let ’em tell those stories and their political connections won’t allow for it. We’ll see you next week.