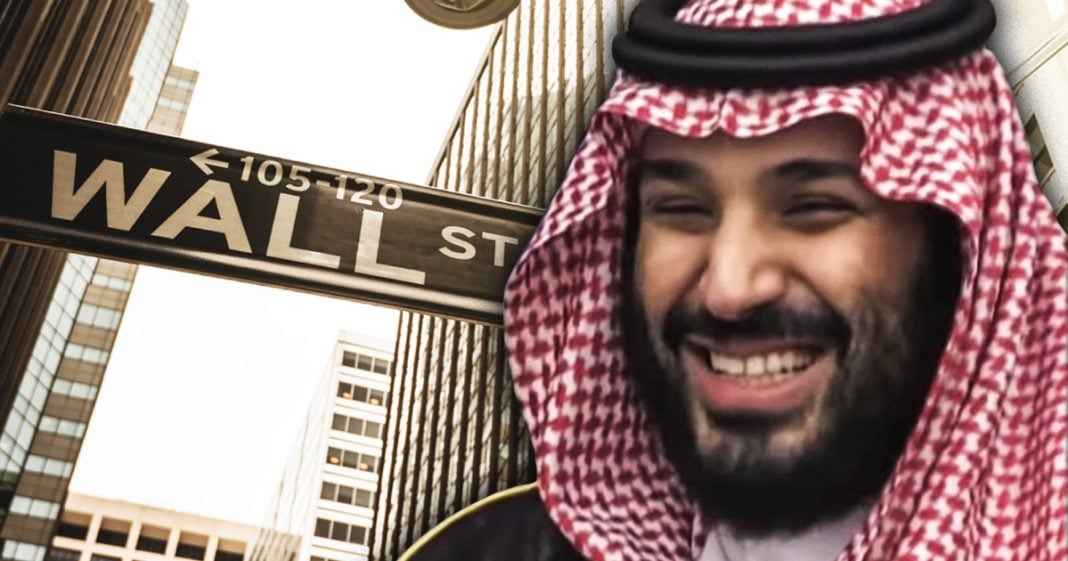 The US government wants to reevaluate our relationship with Saudi Arabia, but Wall Street has other ideas. Mike Papantonio & Farron Cousins discuss more.

Mike Papantonio:             The US government wants to reevaluate our relationships with Saudi Arabia, but Wall Street, as you might imagine, has other ideas. So money has always been the attraction for scavenger, bottom feeders that never believe that some money is too expensive. There is never that question. Is some money too expensive? They’ve never asked themselves that. Pick this story up.

Farron Cousins:                  No, you’ve got the future investment initiative that actually took place, I think about a week ago in Saudi Arabia.

Farron Cousins:                  You had, who went there? JP Morgan’s ceo, Jamie Dimon, Goldman Sachs ceo, David Solomon, Blackstone Group ceo, Stephen Schwarzman. And they all lined up and they said, hey, Saudi Arabia, we’re here. We know that you’re sitting on $620 billion that you want to invest. We would love to help you do it. We know that you have beheaded over 180 people this year, political prisoners, but we’re cool with that because you’ve got $620 billion.

Mike Papantonio:             Wait. They know that Saudi Arabia is responsible for murdering 3000 Americans on American soil. Happened right where these cats, where Mr. Dimon lives, where Mr. Solomon lives, where Mr. Schwarzman lives, happened right in their backyard. They, there’s unequivocal, unequivocal evidence that the Saudis were behind it more than any country in the world. But here’s the difference. Right now, there’s $1 trillion being pushed into fossil fuel by these same cats. Okay. So what happens when they push that money in for fossil fuel? What ends up happening is they, they, they, you’re gonna see a series of IPOs. Alright? IPOs is where these guys take their mega fees. You see, they take management fees that are incredible. The other part, the other part of it is, is they’re managing the portfolios. They’re managing trillions of dollars of portfolios for these Saudi prince types. They’re, they’re never gonna say, some money’s too expensive, are they?

Farron Cousins:                  No, absolutely not. And let’s also not forget, we’ve had some banks in the past doing business with Saudi Arabia. Things didn’t end so well for them.

Farron Cousins:                  Because it turns out, oh, we were actually laundering money for terrorist organizations.

Mike Papantonio:             We’re handling that case right now where these same banks were involved, HSBC. Okay. They were laundering money from terror, for terrorists from Saudi Arabia. They knew they were from Saudi Arabia. They were laundering money. The money was ending up killing American soldiers, American contractors. We have, we can pin it down exactly. Dollar comes to the bank. That dollar we can trace exactly what the terrorist organization was that used it, down to where the bomb roadside bomb is. We have it down to that. They know that. The evidence, the Wall, but hey, has the DOJ done anything about it?

Farron Cousins:                  No, absolutely not. And that was Eric Holder decided, we don’t want to actually prosecute you for this. We’re just gonna make you pay back some of the profit. Not even all of the profit.

Mike Papantonio:             No, no. It was $1.6 billion. And, and they made a hundred billion dollars, 100. They signed a, a massive document that said, yeah, we were washing money for the Saudis. Yes, we knew it was being used for terrorism. Yes, we knew it was killing American soldiers and American contractors. Wall Street would bless this all day long. They would bless, if you, if you had a thousand Khashoggi’s, If you had 1000 Khashoggi’s, the bottom feeder punks on Wall Street would say, That’s absolutely okay. These three guys, Mr. Jamie Dimon, Mr. David Solomon, Mr. Stephen Schwarzman, that would be just fine As long as they can make a profit.

Mike Papantonio:             They’re absolutely stepping over corpses. These are the same people, understand Hitler, Hitler was, was buoyed up by these very same types while mass extinction was going on. While, while, you know, Hitler was at his very worst, they were involved in the process of money lending. So at what point do you say it’s, it’s, it’s irretrievable? It’s broken, it’s irreversible broken. And this is the best example. And Biden has no courage at all. He could step in, he could say, this is absurd. Stop it. He won’t do that because the Democratic party is making so much money from these very people.

Mike Papantonio:             It’s been put on the table. Why are we treating these, these, these thugs, these Saudi Arabian thugs, these prince who I call a mutt, why are we treating them any different from any other terrorist? Because the weapons industry, they want us to, because the, the energy industry, they want us to, because the Democrats and Republican want us to, because they’re getting so much money. So now they’re, they own this country. I mean, they’re already so invested in this country. I don’t think we can ever reverse that. But the point is this, they, these folks that I just named, maybe we’ll have a picture up on in this, in this segment, these folks are stepping over corpses of, of American citizens. 3000 that were murdered by the very people that they’re so anxious to make money from.