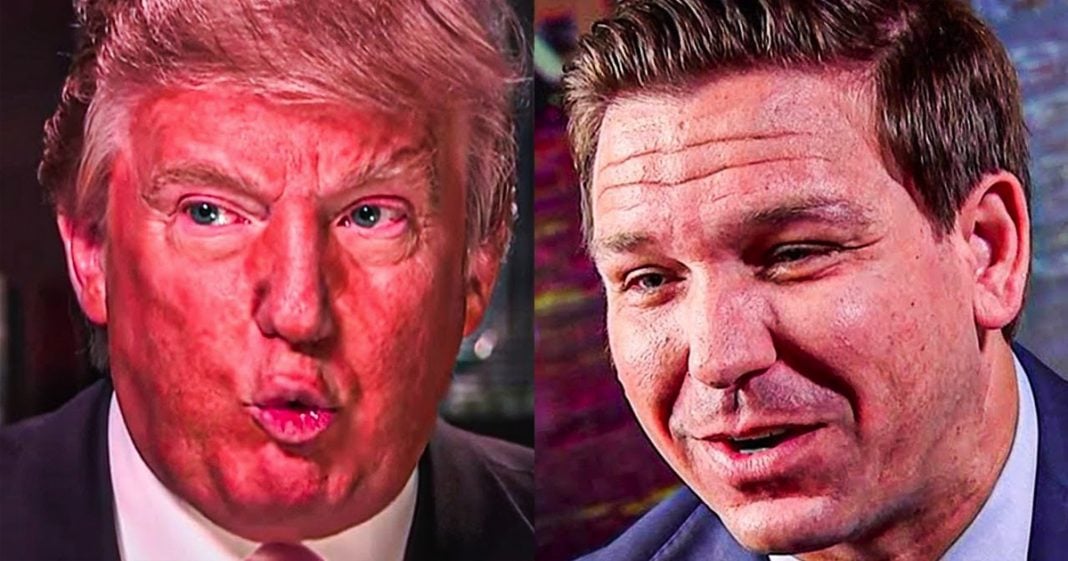 Donald Trump is running for President – but a lot of Republicans want him to step aside for Ron DeSantis. Is it going to be a bloodbath? Ring of Fire’s Mike Papantonio & Farron Cousins discuss this.

Mike Papantonio:             Donald Trump is running for president, but a lot of Republicans want this guy to step aside and say, look, Trump, you’re a disaster. You actually cost the Republicans so much in this last election. If we look at your track record, it was awful. He was going around the country saying, this is my candidate. Okay, this was your candidate and they lost. Last one is Lake. Right? That’s the last one that took place.

Farron Cousins:                  Yeah. Ron DeSantis had the biggest victory of any single candidate last week and really any candidate in the last, you know, 80 years of Florida history.

Mike Papantonio:             Yeah. Whether you endorse him or not, he, he, he maybe can bring some sense back to the Republican party is, is the talking point.

Mike Papantonio:             He’s not a crazy man. And he, look, he has, here’s the difference. They say that he’s boring. He is a little boring, frankly. But you know what? He hasn’t been accused of rape. He hasn’t been found to committed fraud. He hasn’t been found to have committed tax evasion. He has, he wasn’t the best friends of Jeff Epstein. He didn’t have a close relationship. He had no silver spoon in his mouth like daddy did for little crazy Donny. He wasn’t regarded as the worst person on the planet as we’ve seen. I mean, you realize there’s, there’s been votes by both sides.

Farron Cousins:                  But, but I do think if we’re looking at this in just terms of candidate strength, DeSantis beats Trump on every single level. And I love that you pointed out these things that he doesn’t have.

Farron Cousins:                  He hasn’t done that. And so that automatically puts him leaps and bounds above some of these other Republicans with embarrassing videos or whatever.

Mike Papantonio:             This is the short list I got to thinking about before we came on the air. And it is, he, he is Trump is, has caused more harm to the Republican party and to American politics. And it’s just time for him to move over. And the only thing I see promising is you got a guy who might be able to do that here. And I, I’m looking at the numbers right now. He’s, he, he’s, he’s killing Trump already. And.

Mike Papantonio:             Well, the truth is, DeSantis is a rising star and, and, and Trump is a, a flaming out meteor that was there through the sky. He’s flamed out. Nobody will admit that he’s flamed out. But as you point out, DeSantis, 1.6 million votes in Florida ahead of Charlie Christ, the biggest difference it’s ever. Is it, is it just Florida history or is anywhere, Governor history?

Mike Papantonio:             Let me close by saying this. He needs to get out there now because Trump is gonna be out there trying to tie up the big givers.

Mike Papantonio:             Okay. He’s gonna be out trying to tie up as much money as he can from the traditional conservative donors. But if you look at the field, you got maybe Pence, maybe Haley, you know, from South Carolina that, that’s in the mix. But you have Pom, Pompeo who, who I believe will come as a spoiler. You understand if Trump has a lot of people in the field that are just, just taking away potential votes from DeSantis in the primaries, that’s how Trump wins.

Farron Cousins:                  You know, who else has been trying to paint themselves as not a crazy person recently, somebody you and I actually talked about a while ago as a potential spoiler, Dan Crenshaw.

Mike Papantonio:             You, you agree though Trump is gonna hope that everybody stands back while he scrambles around trying to tie up as much money as he can from the big donors.

Mike Papantonio:             That’s all for this week, but all of these segments are gonna be available this upcoming week right here on this channel, and you can follow us on Twitter @AmericasLawyer. I’m Mike Papantonio and this has been America’s Lawyer, where every week we tell you the stories that corporate media won’t tell you because their advertisers don’t let ’em tell you that story. They won’t permit ’em to tell these stories or their political connections are just so tribal and so deep that they can’t tell some of these stories. I hope we’ll see you next time.