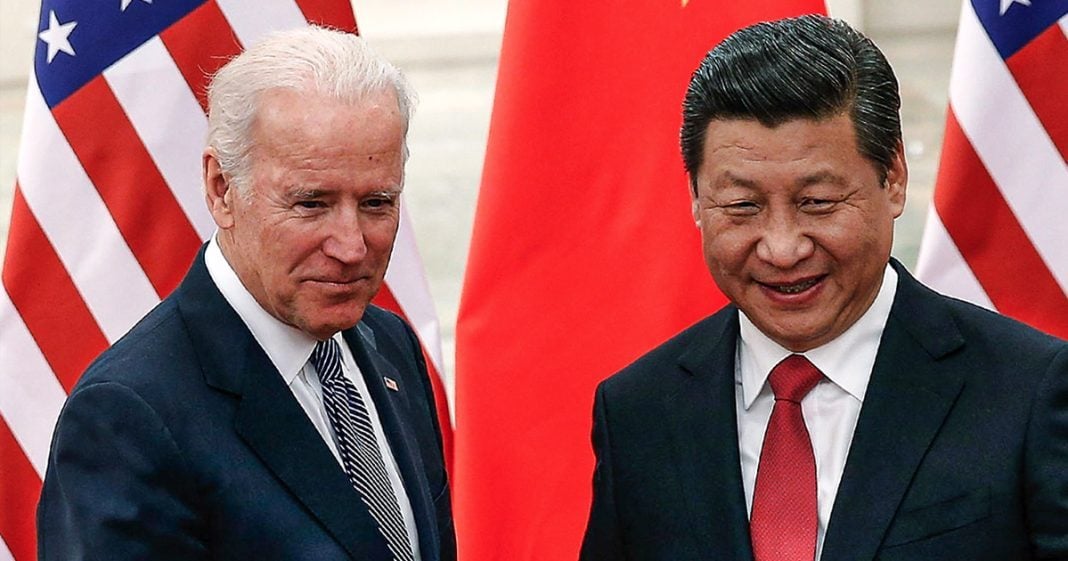 The United States is inching closer to nuclear war by sending nuclear-capable bombers to Australia as a threat to China. Mike Papantonio & Farron Cousins discuss more.

Mike Papantonio:             The United States is inching closer to a nuclear war by sending nuclear capable bombers to Australia to threaten China. Now you weren’t, you weren’t around when we had to jump under our seats in school and we were supposed to get under our seats because there’s gonna be a nuclear blast, and that was gonna save our lives. They, if you talk to anybody about what it is, the earth will be gone in less than 14 minutes. Okay. Now, all these freaks that I used to call, you know, they, oddly enough, progressives, democrat progressives used to be the ones that were saying, whoa, slow down here. Right now we have an administration that is not walking but running to force us into nuclear holocaust. There’s no other way to put it. And so, so, so pick it up from there. I, I don’t think I’m overstating this a bit. This is what this administration is doing.

Farron Cousins:                  Yeah, yeah. It is absolutely terrifying. So the plan is we’re gonna build this new facility down in Australia with the cooperation of the Australian government, and it’s going to house multiple B-52 bombers with the nuclear capabilities. And we’re doing this so we can be closer to China, of course, without having to do it here on the US soil. We’re, we’ll endanger Australia for it.

Mike Papantonio:             If you’re watching this right now, we are not overstating this. This is an administration that is dead set on poking the bear to the point that we’re this close to nuclear Armageddon. Okay. And, and if you’re ignoring that, you’re doing it at your own peril. This is serious stuff right here.

Farron Cousins:                  It, it really isn’t. And, you know, so far we have seen President Biden take very aggressive stances towards China, bordering on, this is crazy. And this week, of course, he did meet with Xi Jinping. They were at the summit. Things didn’t go wonderfully. They said there’s still a lot of tension between the two.

Farron Cousins:                  There’s still no agreements on the big issues. About the only thing they could agree on is maybe we’ll work together on some climate goals, which is great, but if you start a nuclear war, climate doesn’t matter anymore because we’re all going to be dead.

Mike Papantonio:             Well, let me tell you something. This ain’t JFK. This is, we don’t have John F. Kennedy that’s trying to fix this. We have an 80 year old man with borderline dementia that doesn’t understand the weapons industry is pushing and pushing, the Pentagon is pushing and pushing. It’s like they don’t give a. The idea of isolated nuclear involvement is absurd. If you talk to anybody, there’s people that they’ve spent their entire adult career studying this. They say, we last the entire earth lasts 14 minutes if this starts. So why in the hell, maybe you can help me with this, because you’re closer to that progressive side than I am. I’m not out there. I’m not a Democrat. I’m not a Republican. I just call balls and strikes. Doesn’t this scare the hell out of you just a little bit?

Farron Cousins:                  It, it really does. And, and honestly, I do think a lot of progressives are also terrified of this. I mean, this, you know, Common Dreams is, is a hugely progressive group. They’re the ones calling this out here. And what we have to understand is that we’re at the moment, the aggressors.

Mike Papantonio:             And that we could talk about it. Now Biden’s made it clear, there’s no one, there’s no one China. Remember they had to talk Biden back. Biden was going off the cliff talking about what he was gonna do to China. That’s right after Pelosi made her visit, destabilized China even more. What in the hell are the Democrats doing. Now, Farron, you know me, I, I don’t have allegiance to either party. I, I, I swear to God I don’t. I ain’t, I, you know, you know what I think of Trump. You know what I think of the Democrats. I’m just trying to look down the middle and saying, what are we missing here? That we’re talking about thermonuclear disaster for the entire planet and this cat, this 80 year old tired president, acts like this ain’t a big thing because the Pentagon keeps pushing him that way. And the, the, the, the weapons industry keeps pushing him that way. Give me your take. I, look, I have, as you know, I have huge respect for your opinion. I, I always do, Farron. I can’t get my arms around this. Help me with it.

Farron Cousins:                  I, I, honest to God, I really can’t either. Because we’re looking at a situation where we are not under immediate threat here in the United States. Right. China is not gearing up to come over and bomb us or do anything super malicious like that, that’s going to put our lives in danger. We’ve got, you know, cyber issues. Sure. But there’s no immediate imminent bodily harm coming to the United States from China. So on its surface, obviously this makes no sense to begin with. And then when you drill down and you have all of these other factors, yeah, the industrial complex pushing this stuff, the contractors, all of it. That is the only thing that makes sense. That is the only part of this that you can say, okay, I see why we’re doing it. I disagree, but it’s the money.

Mike Papantonio:             See, this isn’t the only story. We’re covering one story and I, I agree with you, you know, this is, this story’s well done. It’s done by Common Dreams. I, that’s a great site. They’re, they’re, they’re true progressives. But there is that faction of the Democratic party that looks like these old freaks from the Republican party.

Mike Papantonio:             The guys we used to worry, the, you know, Goldwater, Barry Goldwater kind of thinking. I don’t, I just can’t get my arms around it. I don’t understand why people watching this right now think, oh, that’s an overreaction. Hell no, it’s not an overreaction. Thermonuclear war starts just like that. You got, we’re poking the bear with, you know, Russia. You got an.

Mike Papantonio:             Putin is totally insane. And now we’re gonna pick a fight with Russia. If you’re living in Australia right now, and you’re saying, well, okay, wait just a second. You’re moving all this nuclear, these nuclear arms right here to, to our little island. What are you thinking, man? What are you thinking? Are you not in the streets saying, hell no. Well, I don’t understand what’s going on in Australia. They, they’re usually very vocal about stuff like this.

Farron Cousins:                  I, I know. And I think what’s going on is that, you know, we talked about this story being from Common Dreams, I haven’t seen it anywhere else. I really have not seen this anywhere else.

Mike Papantonio:             You, you, you weren’t alive, I was, when John F. Kennedy understood that we were moments away from nuclear disaster. He and his brother Robert Kennedy made something happen that changed all that. You don’t have that kind of statesman or leadership right now, Farron.

Mike Papantonio:             When that was going on, I swear to God we were, we were being told get under your desk because there, we went through drills. Get under your desk. You have multi, you have, you have millionaires that are building bunkers, thermonuclear safe, they think, bunkers somewhere out in the Midwest. And it’s, it’s, it’s happening not just a few, it’s happening in a big, big scale. So I’m just, I’m just wondering what does the average person not see about this? Because I get the impression they don’t see it and it scares me, tell me, you know, when you got children, it, it should scare the bejesus out of you.