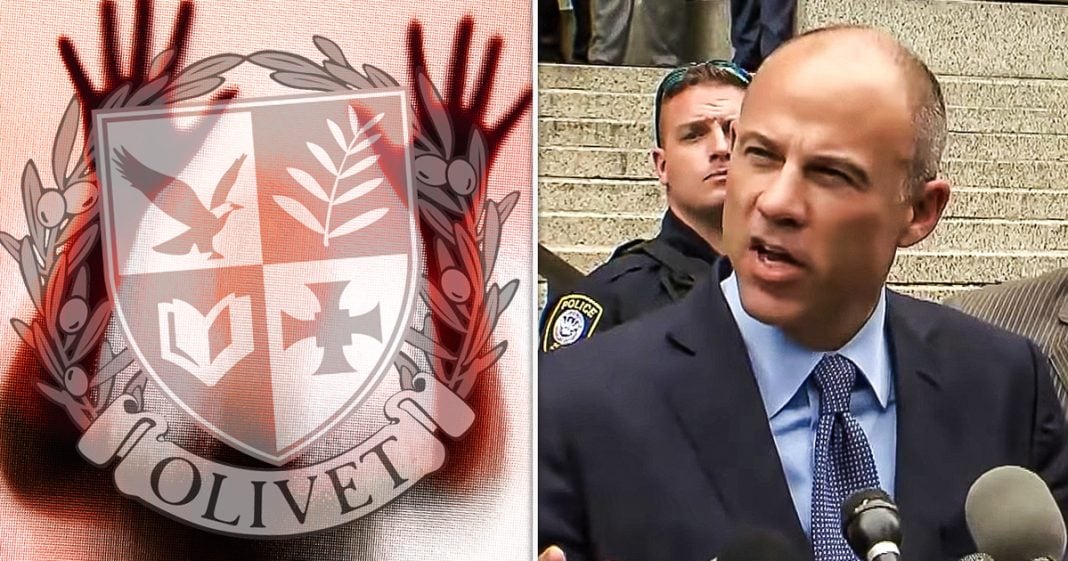 A Christian university is being investigated by the federal government for possible human trafficking violations. Then, Michael Avenatti has been sentenced to four years in prison for stealing from his client Stormy Daniels. Mike Papantonio & Farron Cousins discuss more.

Mike Papantonio:   A Christian university is being investigated by the federal government for possible human trafficking violations. Wow. I looked at this story. This is, this is Olivet University, it’s a Christian college. It’s not well known. I hate to even throw the word Christian college around it. It’s, it’s not really.

Mike Papantonio:   It’s a, it’s a different kind of Christianity when you take a look at this. Labor trafficking, human trafficking, sex trafficking, you name it. It seems to be connected up in some way.

Farron Cousins:       Yeah. And what’s really devastating about this story is that you have these students because that’s what they were doing. They were recruiting students from Korea, from China saying, hey, come over here. We’re gonna give you these student visas. You know, you can come to our college. You can maybe make a better life for yourself. They get over here and then they just ship them off to work these, you know, below minimum wage jobs, obviously. They get paid pennies on the dollar and then they never follow through. They never even track where these people were, were being shipped to and that’s what this whole thing is starting to look like. That this really was just a massive criminal front for human trafficking.

Mike Papantonio:   You know, as you look at this story, Newsweek came out with this story. Now I was really interested in that because Newsweek, one of the owners of Newsweek is directly tied to this Christian university. I mean, not only that, but the other 50%, that it controls this university is a guy named Dev Pragad. He’s the one that has the Jans Christian sect. It is a weird Christian sect. And so you got 50% owned by the people that, you know, anyway you cut it somebody knew what was going on and Newsweek in the middle trying to say, oh, well we have high ground because we’re reporting it. No, they’re not reporting it because of high ground. They’re reporting it because they’ve been caught. Listen, this two years ago, these folks were fined a million, I think $1,700,000 for the same, for fraud and money laundering. And now this is surfacing.

Farron Cousins:       Well, that’s because of the fraud and money laundering investigation, they didn’t go far enough. Why are you laundering money?

Farron Cousins:       Where is the fraud? And so they had to come back after these other allegations came out and they said, oh God, I’m sorry. We forgot the other half of our investigation here.

Mike Papantonio:             Michael Avenatti has been sentenced to four years in prison for stealing from his client Stormy Daniels. What everybody doesn’t understand is this guy has stolen from everybody. He, the most compelling story is he stole from one of his paraplegic clients where he just basically stole all the money that was supposed to go to the client.

Mike Papantonio:             And so, so this, this is an awful person who, oh, by the way, oh yeah, the Democrats thought he might be the new great white hope for the Democratic party. You remember that?

Farron Cousins:                  A whole profile was written about how this guy and his fighting style, this is what the Democrats have been sorely needing. Is he possibly gonna be our 2020 nominee? They were saying at the time, back in 18.

Mike Papantonio:             I mean, anybody, anybody had enough information to go after. But from the very beginning, you, you identified the guy as an absolute utter fraud.

Mike Papantonio:             I mean, you had some of the first stories about this guy being an absolute fraud and on the other, because you had the stories where he had this long history of him stealing money from clients, committing fraud, complete, committing wire, you know, wire transfer.

Farron Cousins:                  Wire fraud, tax fraud, bank fraud. I mean, his firm was going under, by the way, before Stormy Daniels showed up and basically saved everything for him.

Farron Cousins:                  Well, they, they really did. There were think pieces in every major media outlet that, could this be the future of the Democratic party? I mean, people go, go look.

Mike Papantonio:             And then you’ve got other charges throughout the, throughout the country. Now I wanna point something out. Most all of that was already known.

Mike Papantonio:             When MSNBC was putting him up as the talking head, when CNN said he might be the great white hope, all of that was already known, but they, the corporate media didn’t tell that part of the story. So the average voter thought, wow, this is the guy. He’s a tough talker. Right?

Farron Cousins:                  Right. And then of course, after Avenatti fell from grace, the next person they flocked to was immediately Andrew Cuomo.

Farron Cousins:                  They, they don’t have a good track record on picking their next Democratic hero, if those are the two guys that at one point were supposed to save the party.

Mike Papantonio:             It’s the Democrats the same as, I mean, it’s human nature. We need a hero and we are just so tied into hero worship in this country. We really are. It’s just so sad that we, you know, we’ve fallen so far that, yeah, he looks like a tough talker. That’s exactly what. Well, why don’t you go take a look at his background. Farron, thanks for joining me. Okay.

Mike Papantonio:             That’s all for this week. But all of these segments are gonna be available this coming week right here on this channel. And you can follow us on Twitter @americaslawyer. I’m Mike Papantonio and this has been America’s Lawyer where every week we tell you is stories that corporate media won’t tell you because their advertisers won’t let ’em or their political connections just don’t allow for it. We’ll see you next time.