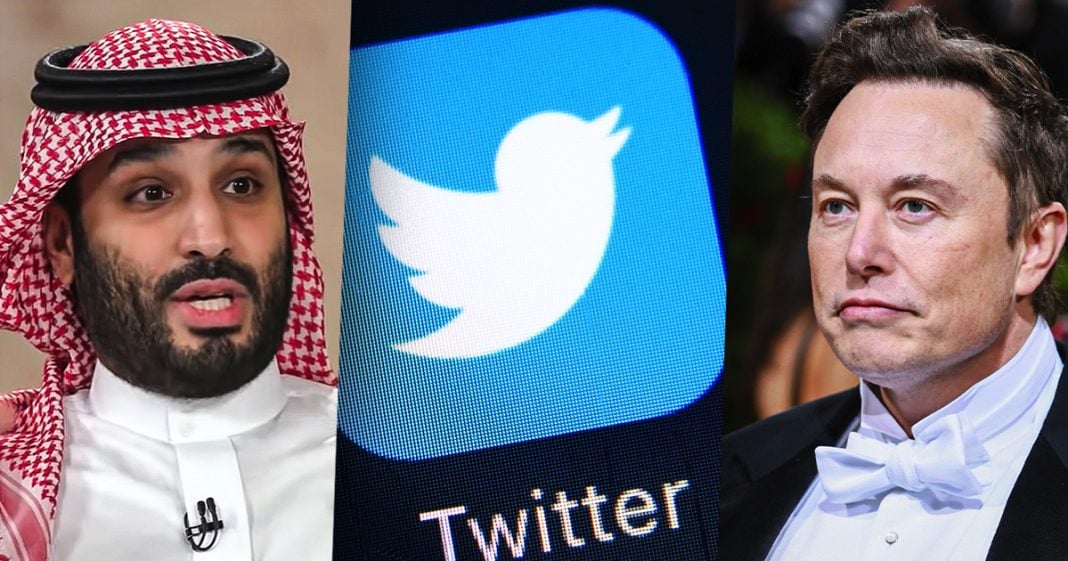 Mike Papantonio:             Elon Musk now owns Twitter, but the investments from Saudi Arabia shouldn’t leave you feeling warm and fuzzy. Well, okay, let me, Farron, I saw this Newsweek, I have almost zero confidence in Newsweek. I mean, zero. It has become nothing more than a, you know, a polarized propaganda rag. What I hated about this story is they act like this is something new. Okay. Twitter was, Saudi Arabia already owned huge interest in Twitter.

Mike Papantonio:             Yeah. We did a story on it. Not only they owned, they, they had huge shares in Twitter. So they roll it over to him, to, to Musk and Newsweek goes crazy about it. Like, oh, this is, this is something new. It’s not anything new. They’ve been owning part of Twitter.

Farron Cousins:                  Right. It, it’s definitely not new, but it certainly is terrifying that, you know, the Saudi Royal Holding company has $2 billion now invested in Twitter. They are the second largest investor behind Elon Musk.

Farron Cousins:                  And of course, the danger with that, as we have talked about plenty of times, is that Twitter, or not Twitter, Saudi Arabia puts people in jail for their tweets. An American citizen is now in jail in Saudi Arabia for 16 years.

Mike Papantonio:             Okay. The story we did on this, I, I just, it was weeks and weeks ago. I, I don’t remember exactly, but part of that story was Twitter knew what was going on.

Mike Papantonio:             The folks at Twitter knew that they had Saudi spies that were doing this, and they did nothing about it. And it wasn’t Elon Musk, it was the owners before Elon Musk that said, yeah, that’s okay because Saudis are giving us so much money. This mutt, the prince, the Saudi prince who is an absolute mutt, a wild bear, they describe him, is a guy that is going to do everything he can to influence the, the, the messaging there for $2 billion, just like the government does. We’re gonna do that story today. Just like, just like, just like all these agencies have done with social media. This is a great avenue for the Saudis, isn’t it?

Farron Cousins:                  It, it is. And again, I can’t stress enough how dangerous this is for the people of Saudi Arabia. Now, I got tons of issues with Musk buying Twitter. I don’t want the oligarchs out there holding the public town hall. That’s dangerous in and of itself. But having people that will literally kill you for your tweets, that’s even more dangerous.

Mike Papantonio:             But Farron, do you see the point I’m making? Newsweek acts like this is, okay, this is something new. It’s not anything new.

Mike Papantonio:             The Saudis we’re already in control of Twitter to where the, to where the folks at Twitter knew they had spies, didn’t do anything about it. And now this American is in prison for 16 years because of

Farron Cousins:                  Well, part of the reason this is treated as something new is because the Royal Holding company came out and bragged about it.

Farron Cousins:                  On Twitter, they put out this big post like we’re now the second. So they’re drawing attention to it because now they think, oh look, we can be open about what we’ve been doing for years at Twitter. So if, if they’re willing to come out in the open, that again, super scary because now they feel like we don’t have anything to hide.

Mike Papantonio:             But is Newsweek suggesting that the folks at Twitter are so stupid that they didn’t know that the Saudis were already in control of Twitter when they were in charge? You see, you got, you gotta, you gotta call balls and stripes.