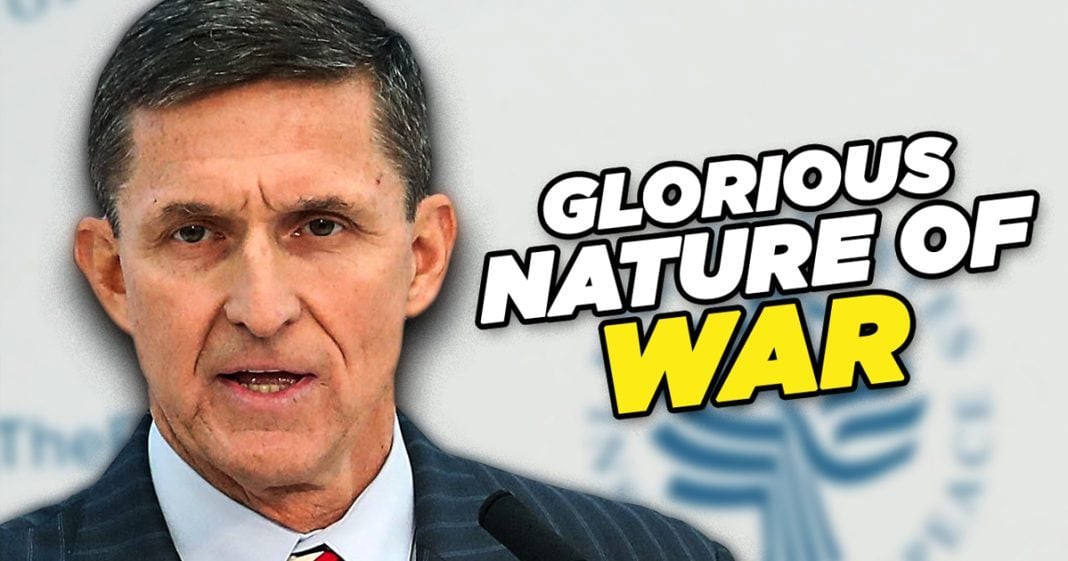 Former military officials are cashing in by taking jobs with foreign governments that are hostile to the United States. Mike Papantonio & Farron Cousins discuss more.

Mike Papantonio:             Former military officials are cashing in by taking jobs with foreign governments that are hostile to the United States. Ring of Fire’s Farron Cousins joins me to talk about what’s happening. This is a really, really bothersome story. We’re talking about admirals and generals while they’re still on the job working in the Mid East, actually working for Saudi Arabia, actually working for places like Qatar. It’s, it’s incredible. And we’re talking about big money. We’re talking about these guys are making millions of dollars. They take their training, they take everything we give them, these admirals and these generals. I’m talking about, I’m talking about five star generals, four star generals that are, that are doing this and, and just, it’s a cash, it’s a cash cow for ’em.

Farron Cousins:                  It, it is. You know, the report from the Washington Post shows that some of them are making thousands of dollars a day plus benefits, plus living expenses, all to go over there. And most of them, the majority of them have ended up working for Saudi Arabia. And what they’re doing is they’re basically teaching them how to turn their military into the United States military. And then they come back here, lobby the government, send them more weapons, send them more money, because I get more money if I send them more.

Mike Papantonio:             Any coincidence that these are the same people on MSNBC and CNN churning up war? I mean, it’s the same kind of faces.

Mike Papantonio:             They’re working for the Saudis, they’re working for the weapons industry. They’re on MSNBC, they’re on CNN, talking about the glorious nature of war, the glorious nature of Saudi Arabia. These guys are punks. And I mean, for us not to do any, and, and let, let’s call names. I mean, first of all, security advisor James, James Jones, he was the security advisor for Obama. So he’s making, good God, millions advising the Saudis, lobbying for the Saudis, telling the Saudis, if you want our weapons, you gotta come through me. Telling the Saudis, if you want to train your guys to, to fly our F35s, you gotta come to me. This is so wrong for so many standpoints and nobody’s doing anything about it.

Farron Cousins:                  It, it is, And the biggest problem too is that technically these individuals are supposed to report to the military if they’re gonna go work for a foreign government. But if they forget to tell the government.

Farron Cousins:                  There, there is no punishment. There’s literally no punishment on the books. They couldn’t punish them if they wanted to. So these retired people who spent 20, 30 years, our tax dollars trained them, made them into what they are. They’re saying, thanks, now I’m gonna go help. I mean, in many cases, literally our enemies learn how to kill other people.

Mike Papantonio:             The, the average pay for a four star general working for Saudi Arabia is $200,000. Okay. And what are they doing? All they’re doing is buying access. They work for the weapons industry. They’re getting money from the weapons industry, and then they’re getting weap, money from Saudi Arabia. And then they’re getting money to go on MSNBC and CNN and to tout how remarkable Saudi Arabia is with their, what is it, $500 billion futuristic city that they’re building. You, you’d think, you’d think it’s just, you’d think it’s heaven there when you watch these guys on the news, even though they know the same thing we do. They know the Saudi Arabia, that, that the Saudis were responsible for killing 3000 Americans on US soil. They know that. They know the royal family participated in that, made it happen. They know Khashoggi, they know the Khashoggi story real well. They know everything about what a freak this dictator is. This punk dictator that’s, that’s absolutely running Saudi Arabia with such an iron fist. It’s okay with them.

Farron Cousins:                  Yeah. They, they’re perfectly fine working for a government that is killing people for tweeting, literally lopping their heads off, you know, with, with a hundred other people. Killing political prisoners. An American in Saudi Arabia just got sentenced to 16 years in jail for a tweet. And these people say, that is perfectly fine with us because they’re paying me hundreds of thousands of dollars to make sure they get more military equipment.

Mike Papantonio:             Now, okay, this is being done. Last week, the Saudis just absolutely hustled Biden. Okay. Biden did everything he said he was gonna do for them. They asked Biden, can you get us more weapons? He got it for ’em. Said, Biden, if you get us more weapons and you get us more training in the United States, we’re gonna help you with oil. Then they turn around and do absolutely the opposite of what they tell Biden. He was negotiating in good faith, basically trying to help our cause in the United States with, in good faith. These guys knew that went on. And they know that they’re playing an invisible role here. Like nobody’s paying attention. Have you seen this one time on television, one time?