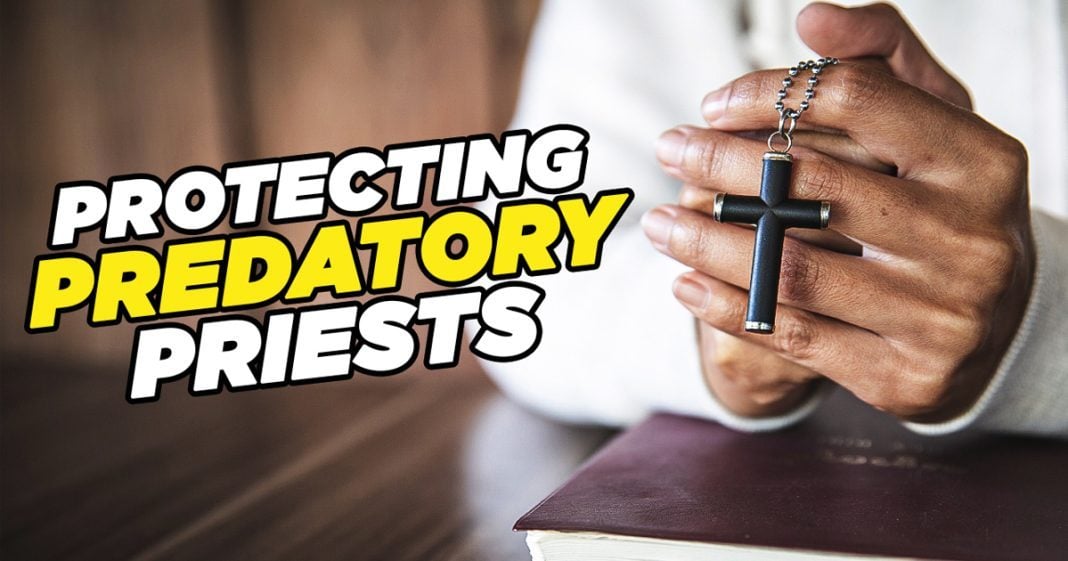 Laws on the books in 33 states protect clergy members from having to report abuse of children to authorities. Mike Papantonio & Farron Cousins discuss more.

Click here to find out more about church abuse lawsuits.

Mike Papantonio:             Laws on the books in 33 states protect clergy members from having to report abuse of children to authorities. Ring of Fire’s Farron Cousins joins me to talk about what’s happening with that issue. Well, your take is probably the same as mine. A, there shouldn’t be any protection. B, if somebody has confessed, God bless ’em, maybe they’ll save their soul from going to hell. But that still doesn’t protect the child.

Farron Cousins:                  Yeah. And, and just this year alone, we’ve seen obviously, you know, the Southern Baptist Convention with their massive scandal, Scientology with their scandals, the Church of Jesus Christ of Latter Day Saints, the Mormons with their child abuse scandals. So we’re talking about off the charts right now, levels of child abuse being reported that happened for decades before anybody came forward.

Mike Papantonio:             Well, you know, right, every, every attempt, whether you’re talking, there’s a whole list of states that say that there’s 33 states that say, yeah, we’re gonna give ’em some kind of protection. Every time there’s a run at that, the money that comes in to stop it, the lobbying money is the Catholic church. The, the Mormons, God, probably the Scientologists, I can’t say for sure. But the point is, there’s no, there’s no constitutional protection here at all. This isn’t like a lawyer, this isn’t like a lawyer client privilege. There, there’s some constitutional rights that attach to that. There’s no constitutional protection here. This is a, this is a legal fiction that has been created by these churches, really.

Farron Cousins:                  Yeah. And, and it’s very weird to me that these churches are in the business of protecting these individuals. You know, they, they don’t really stand to gain anything.

Farron Cousins:                  From protecting people who are abusing children. That’s what really drives me crazy about this, is there’s no, you know, if a person comes in and confesses and said, yes, I, I raped an eight year old.

Mike Papantonio:             Ultimately the church suffers and the church, because they can’t seem to figure out, you have to clear them out. A pedophile is always going to be a pedophile. When I, I used to prosecute, and the same people would come up all the time, the same pedophile problems, and they’ve done study after study that says, you can’t change this. So when somebody comes to a priest and they, they say, I’m, I’m abusing children, sexually abusing kids, there is absolutely no precedent, there’s no constitutional precedent at all that says that, that priest should not have to go tell the authorities.

Farron Cousins:                  And, and these pastors, priests, whatever, they can hear it from the person’s mouth saying, yeah, uh, right before I walked in here, there was a kid out there, and the priests won’t know anything.

Mike Papantonio:             Well, of course the church is worried about lawsuits and losing money, and they don’t, they’re so shortsighted.