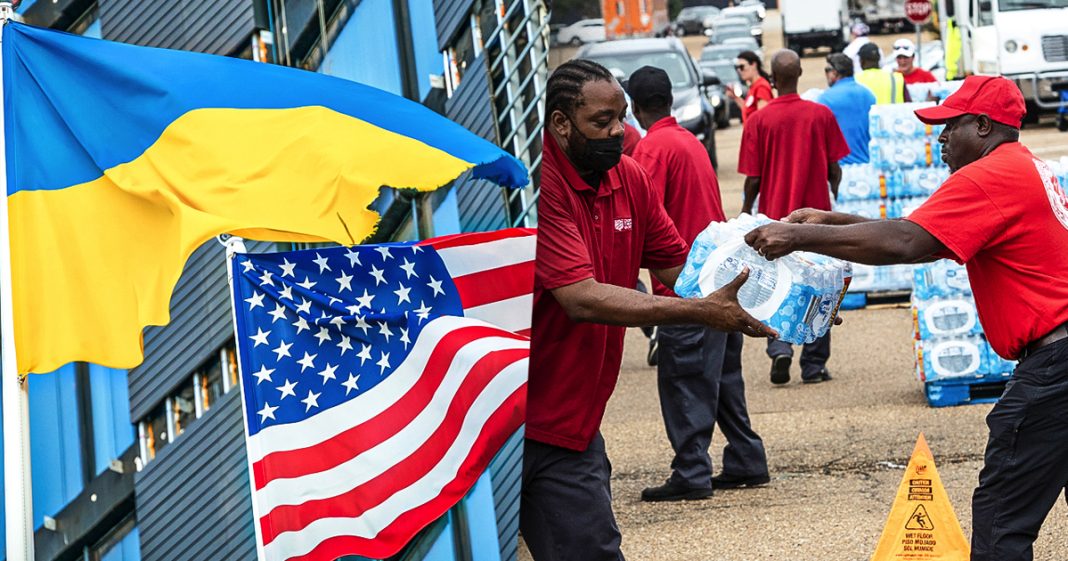 Billions of US dollars continue to flow to Ukraine, even as Americans go without safe drinking water that could be fixed for a fraction of the cost. Mike Papantonio & Farron Cousins discuss more.

Mike Papantonio:             Billions of US dollars continue to flow to Ukraine, even as Americans go without safe drinking water that should be fixed for a fraction. Okay. First of all, I know you’re not as militant on this as I am. I don’t even think we should be in Ukraine. I think it’s a NATO problem. We’re spending, what have we exceeded a hundred billion at this point?

Mike Papantonio:             20 million. We wanna spend 20 million. We know this stuff’s killing you. It’s causing cancer, causing neurological disease. They’re latency diseases that we don’t even know how bad they’re gonna be. We know there’s lead in the water that’s causing neurological disease for the children, but we’re gonna give you 20 million. And oh, by the way, we sent another $13 billion to Ukraine. And I know you’re not as militant on this as I am. We shouldn’t even be there, Farron. We should not even be there. It’s a NATO issue. And you make the comparisons, NATO’s spending chump change to try to, to try to fix the problem.

Farron Cousins:                  Look, I’m at the point now where I do think the United States is going to have to stop with this money that we are just absolutely sending out the window. And the reason we’re spending that money, of course, is because it goes to the weapons contractors here in the United States.

Farron Cousins:                  So there’s a lot of profit to be made and that’s why it’s happening. But what we see in Jackson, Mississippi, which is also happening in thousands of other areas around the country, is that this water system has been failing and they’ve known it’s been failing for years. And for what they’re sending to Ukraine, it would cost pennies on the dollar to go in there and fix it. 20 million is nothing for a government.

Mike Papantonio:             I see, it’s 20. Okay. So here’s, here’s where this all lands to me. The people who really benefit are the weapons industry. They, they’re the ones pushing Ukraine. They’re the ones that were rattling the sabers about Ukraine. They were the ones saying, yeah, let’s push Ukraine into NATO. And, and Ukraine was saying, stay the hell out of our business, you know, but the weapons industry wanted a war. The, the, the media couldn’t wait for another war. My God, watch CNN. It’s the only thing that brought CNN back to a glimmer of life. MSNBC, the same way. So here we’ve got a war where we’re spending those kinds of billions of dollars and we have an infrastructure that is crumbling and we can’t seem to fix something as basic as giving children clean drinking water in the United States. I mean, really?

Farron Cousins:                  Well, and they’re still in Jackson, Mississippi, they finally have running water again. But they’re being told, uh, don’t brush your teeth with it.

Mike Papantonio:             And let me give you an idea of what NATO companies are, countries are paying. Albania, $1 million. Belgium, $20 million. Croatia, $16 million. Denmark, $400 million. So here, so at what point does this fall on us as responsibility? At what point do we say we are not the policemen of the entire frigging world? Okay. That we have a responsibility at home. And if this doesn’t get, hey, how about Puerto Rico? Puerto Rico just slammed. Biden says, well, we’re gonna give you, that’s where the 40 million came in. We’re gonna give you $40 million. They won’t even touch the destruction of what happened in Puerto Rico for $40 million.

Farron Cousins:                  You know, they hadn’t even finished all the repairs from Hurricane Maria from a few years ago. And, and we do nothing. That is a United States territory.

Farron Cousins:                  Those are United States citizens. And it, whether it’s Puerto Rico or here on the mainland, we are letting our people get poisoned. We are watching as bridges and roads crumbled to the point where people die on them.

Mike Papantonio:             Well, Farron, look, here, here, here’s the truth. I know you’re not as militant as I am on Ukraine. The reason we do so well together as a team is because I respect your opinion and you respect my opinion. Have you seen sometimes the comments on our site where there’s an attack on you because they disagree with you? They attack on me because they disagree with me as if that’s going to change anything. The difference of this kind of show is, is I respect your opinion.

Mike Papantonio:             And I don’t think I’ve ever shown disrespect for your opinion. And, and, and we respect the idea that opinion, opinions evolve.