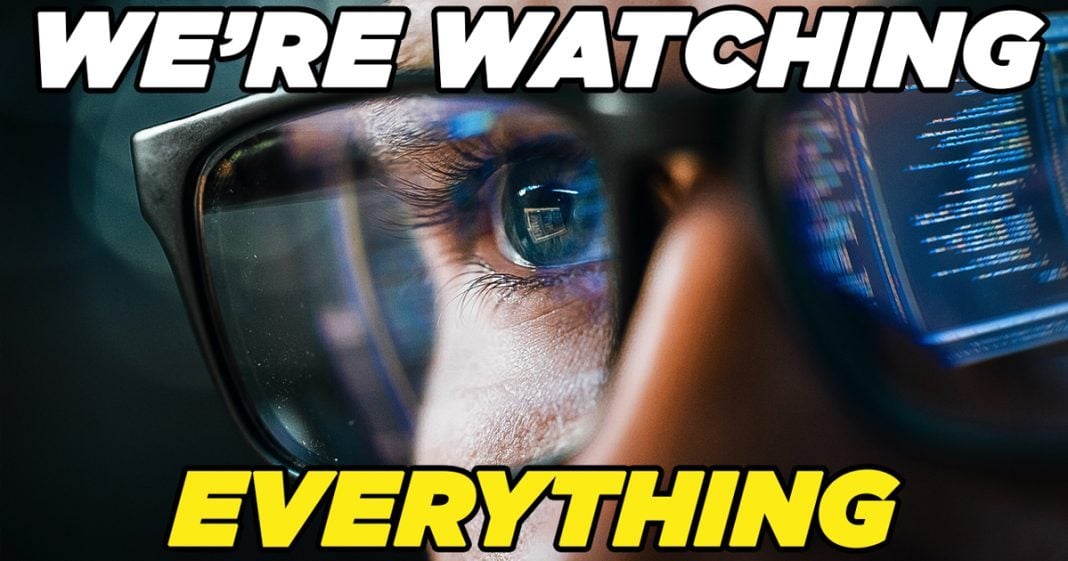 The US military recently purchased a massive new surveillance program that could give them access to EVERYTHING that’s done online. Mike Papantonio & Farron Cousins discuss more.

Mike Papantonio:             The US military recently purchased a massive new surveillance program that could give them access to everything that’s online. Well, you know what, I, let me tell you about when I saw this story. I, I had been doing some reading that it really is troubling to me and it’s troubling because there’s, the millennials don’t seem to give a whether they’re being monitored or not. They, they, I mean, if you take a division in age groups, baby boomer, boomers, yes, they don’t like it. Older baby boomers, yes, they don’t like it even more. Millennials, maybe Xers and millennials, they think about it differently. They think it’s just a cost of doing business so they can have access to the stuff they want.

Farron Cousins:                  Right. A lot of them have the mentality, well, I’m not doing anything wrong, so what does it matter? You know, forget civil liberties, forget all of that. You know, let’s just, you can have my data. It doesn’t matter. It’s not important.

Farron Cousins:                  And we should be terrified that the United States military has bought this program, Augury is what it’s called.

Farron Cousins:                  And they can use this, they can just pay and the company will hand them over data, email activity, website activity, cookie data that is on their computers. It lets them know every single thing an individual has done. And Augury was basically started for corporations.

Mike Papantonio:             Okay. I had not really heard. I, I knew that they had organizations, but Motherboard apparently is the king of this process scrape and sell, right?

Farron Cousins:                  Yeah. And, and so again, this was started for corporations so they can get your data and target you with ads and sell you stuff. And the military saw the application of that, they said, well, wait a minute. If you know what websites this person’s going to, you know who they’re emailing and what they’re saying in the email, maybe we should have that. Maybe we need to know that. You know, so, so we can, we can track the hackers, they say. We, we gotta make sure we’re cutting down on cyber crimes. So NCIS is actually the big military organization that is buying this left and right. And the scariest part.

Mike Papantonio:             It’s completely warrantless searches. Now, again, let me come back to the basic concept that just should startle everybody, including millennials, if you’re a millennial. And that is that they’re willing to trade off this right to privacy because they, because the internet has functions that they want.

Mike Papantonio:             In other words, I want this and I want it so bad, I’m willing to let you into every little secret of my life, my home, whatever, my job, whatever I do, you can have it, no problem, because I’m not worried about it. And then the second thing is they, they’ve always assumed, they’ve come up, it’s a generation that’s come up and has always assumed that this just goes on. Yeah. When I, when I go into that world, this is gonna go on. So what do I have to complain about, right?

Farron Cousins:                  Well, and another scary part of this too is that this is the government’s way of getting around the whole, I need to have a warrant, which means I have to have probable cause.

Farron Cousins:                  No. Really, they did not. You know, our, our history classes kind of ended right at the end of World War II. We dropped the bomb, we win. That’s it. You’re good to go graduate now. But, but I do, I do wanna point something else out here because this, this is actually truly terrifying here because we have.

Mike Papantonio:             But if you think it’s particularly terrifying, then that’s terrifying to me.

Farron Cousins:                  He also sits on the board of the Tor software project. And Tor is a, is a online tool that allows you to basically not be tracked and not be searched.

Mike Papantonio:             Rabbi Rob Thomas. Okay. Well anyway, this only gets worse before it gets better because when you have a generation that doesn’t care. I mean, if you say, I don’t care. This is worth it to me. All this stuff I want, this is worth it to me. You know, I, well, you know, you and I have been doing this together for 20 years. And the interesting thing is the age difference between me and you, the way we see it, the way I see it, the way you see it. We most of the time merge on that. But I think about it when, when, when somebody sees a story like this, they go, well, I care. Well, and I’m, I’m millennial. Well, that’s not what the numbers say. That’s not what the statistics say.

Farron Cousins:                  Like, you know, Facebook’s selling your biometric data, you’re still putting your pictures up there every single day.

Mike Papantonio:             Exactly. Yeah. I mean, I’m eating, I’m drinking a milkshake at, at whatever it is. You, you, you’re there showing them what your life is. It doesn’t seem to bother anybody.