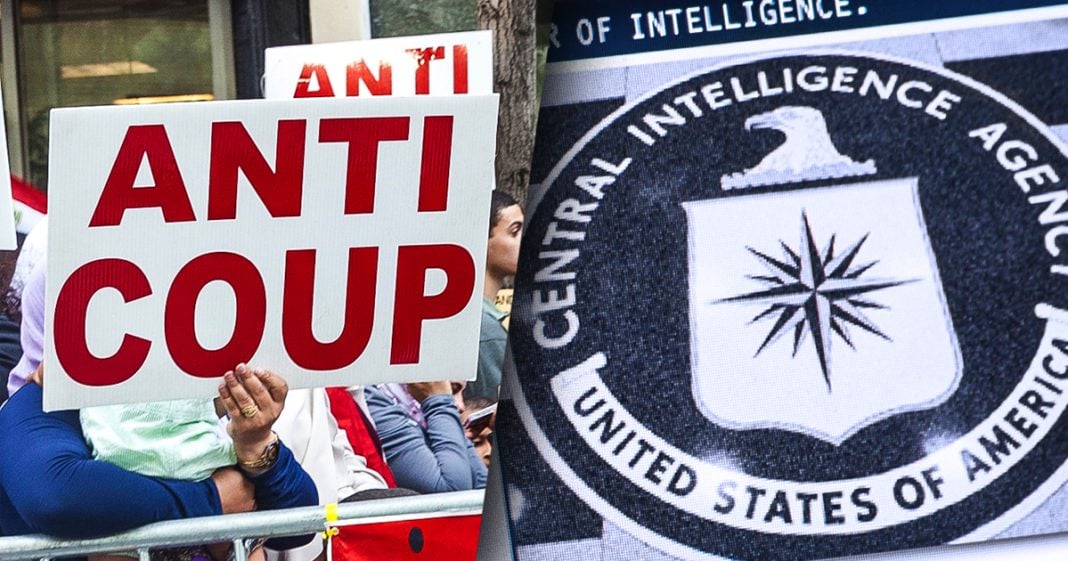 The CIA has launched a new podcast to help spread propaganda about the agency. Mike Papantonio & Farron Cousins discuss more.

Mike Papantonio:             The CIA has launched a new podcast to help spread prop, propaganda about their agency. This is, this is the CIA’s effort to whitewash the idea that, yeah, we, we did kill Allende. Yeah, we did, we did kill Diem. We’ve, we’ve, we’ve carried out all these assassinations. We’ve put coups in place all over the world. And oh, by the way, now we’re messing with American politics. Now that, that one, that one gets real close to home. Whether, you know what I’ve, I think Trump was, honest to God, he was just a horrible, horrible person and politician. And I have worked everything I can do to, to, to, to, to defeat him in that effort. But I’ve also been conscious when the CIA gets involved in presidential politics in the United States, that’s very dangerous. And like him or hate him, I swear to you, they’re, they’re involved. They’ve been involved in this presidential process for several years now.

Farron Cousins:                  Yeah. And, and, and this new move, I mean, starting a podcast, this is absolute insanity because it is, you know, we know from the first episode that’s come out, it’s pure propaganda. They want to go out there and, you know, dispel some of the myths about the agency by having members of the agency tell us how great they are. They’re gonna go out there because they already have, they’re gonna tell us, oh, we’re killing these people in drone strikes. But they’re not gonna mention, oh, by the way, we also just murdered a hundred, 200, 500 civilians with the same drone strike because oops, we missed the first time. Which actually is what Kevin Gosztola pointed out from, because he’s done such a good, good job of covering things like this. But this is 100% propaganda from the United States government to whitewash a horrible agency with a despicable history.

Mike Papantonio:             Whitewash 75 years of spook conduct that when you start taking a look at it, it should scare the hell out of every American citizen because it’s not just about taking care of, you know, it’s not just about taking care of us. A lot of ways it’s, it, there’s hustling us involved, there’s covering up that’s involved. And I gotta tell you something, I, the, the CIA, the CIA has had a free, they’ve had a free ride.

Mike Papantonio:             For too long. Every now and then a politician will come along like Frank Church and say, I want, I want you to open your books a little bit. We need to start seeing what you’ve been up to. And I think, I think we’re almost approaching that time right now

Farron Cousins:                  Well, and a lot of people need to understand too, it’s not just what the CIA has done overseas. It’s what they’ve done here on American soil for 75 years. I mean, hell, they, they had files on Elvis. They thought, oh, well, his gyrations, I mean, literally one of their files said, well, his gyrations are corrupting a nation.

Mike Papantonio:             Oh God. You know, talking about targeting environment. Well, now, now again, I don’t take a stand on this pro-abortion or this is not a stand. But now you’ve got them going after pro-lifers in a way that I understand there’s gotta be some way to contain really crazy conduct, but it’s gotta be on both sides. You don’t just say, well, we’re gonna target these folks because it’s politically correct for us to target these folks. I, I don’t know, man. I, I just think that once the public starts really understanding, Howard Zinn was of course the greatest writer, Chalmers Johnson, Matthew Mintz, you know, those folks were great writers and they told the story about what was going on with organizations like. I don’t know who’s writing about anymore. Maybe Matt Taibbi. Who, who, who would you, who would you say is up there really following this kind of thing? I, I’d say Matt Taibbi for sure.

Mike Papantonio:             Yeah. Well, we, we need them in there because there are no more Howard Zinns. There are no more Chalmers Johnsons or Matthew Mintz or these people. And if nobody’s looking at ’em, that’s real dangerous.