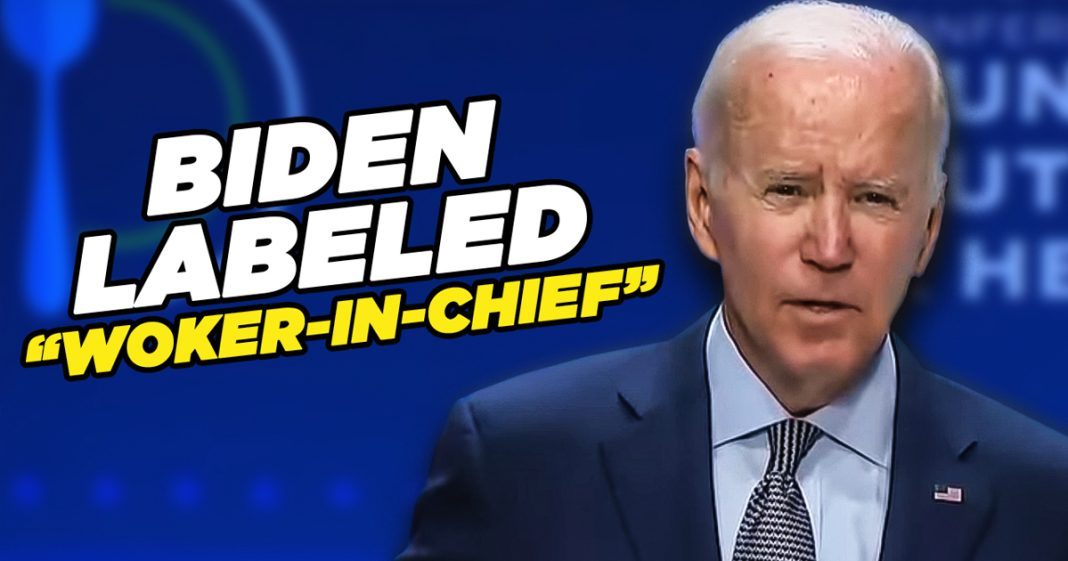 A Republican senator recently blasted President Biden for being too “woke,” but do the voters feel the same way? Mike Papantonio & Farron Cousins discuss more.

Mike Papantonio:             A Republican senator recently blasted President Biden for being too woke. But do the voters feel the same way? Okay. You’re gonna have to answer the voters feel the same way. I, all I can look at is, is he’s killing the Democrats coming up to midterms. Now, voters, maybe, maybe there’s other polls that show it. But the good news to me in this story is woke is really on its way out. I mean, this whole culture cancellation, the, the whole, that whole idea is really become so offensive to so many people that these, you know, snowflake types that are still living in woke, woke world. It’s, it’s kind of disappearing on ’em little by little.

Farron Cousins:                  Like, Biden’s a lot of things. But, but woke, I’m, I’m not seeing that coming out of this guy. He is not shoving anything down our throats the way that the Republicans would like it to be. So when.

Mike Papantonio:             Do you think, do you think it’s disappearing? I mean, do you think that this, that you’re reading all people are so frigging tired of it. You know, you got Bill Maher attacking it. You got late night comedy attacking it to where this kinda snowflake image of wokeness. I mean, they’re, they’re kind of perceived as, you know, childlike spoiled brats that have, don’t, that have no ability to think critically. That if it doesn’t, if they don’t agree with it, we’re gonna tear the statue down. If I don’t agree with the person that’s coming to speak at my university, we’re not gonna let ’em come speak. You see, that is so dangerous, man.

Mike Papantonio:             So, so you don’t really think there was any wokeness hysteria that took place over the last couple years? I mean, I’m curious.

Farron Cousins:                  I mean, to a degree people have been pushing what would I guess be called woke. But when you see the attacks from the other side, you know, when anything kind of bursts their bubble, it’s that hypocrisy that really makes a lot of people say, well, wait a minute. You know, what, what actually is going on here? Is this being crammed down our throats? Or is this a bunch of reactionaries trying to get clicks and views?

Farron Cousins:                  And now that is a problem with some voters. Obviously, you’re not gonna attract anybody from the far right.

Farron Cousins:                  When they’ve created this image. But some people in the middle may think, oh my God, all I hear about is woke, even though it’s all coming from the right.

Mike Papantonio:             So are we just, are we just seeing the headlines that they, if you read the headlines, it’s almost as if you have this class of people, call ’em the woke group, whatever the hell that is. And they believe that, that, that the American public is too simpleton to un, to understand that there’s different sides to every story. Therefore, they’re so simpleton and so stupid that we as the woke group must tell them what they can think, what they can see, what statue should be up, what book they can read. Because that’s, that’s really, if, if, if, if the Republicans have accomplished that, that’s a pretty big deal.

Mike Papantonio:             But let me read it. Okay. This is from John Kennedy of Louisiana. You know, he’s the guy that’s always testifying, always has a, you know, always has pretty good shot on both sides. It says, well, it’s not exactly a news flash that President Biden has appointed thousands of uber wokers to his administration. Now, first of all, you don’t believe that’s true? I don’t know if it’s true or not.

Mike Papantonio:             I don’t. Okay. Wokers are easy to recognize. They hate George Washington, Thomas Jefferson, Abraham Lincoln, Dr. Seuss, and Mr. Potato Head. I mean, that is a pretty good line, though.

Mike Papantonio:             Okay. Alright, well, let’s keep, let’s, let’s work on way through this. It says, Kennedy told guest, host Trace Gallagher, wokers respect no one’s opinion but their own. Wokers think that America was wicked when it was founded and it’s more wicked today. They think that most Americans, ordinary, ordinary Americans are stupid, ignorant and racist, misogynists. And that now the workers think that they are the only smart people left in the country. Okay. That, that is the sale.

Farron Cousins:                  They’ll believe it. And, and they think these things are true even though, again, he’s pointing out things that there was a panic over on the right, not on the left over.

Mike Papantonio:             I, I saw some good news here. I, I did a little, little, took a look at a couple of other articles. It says that when capitalism steps in and they try to take this thing called woke because they think they can sell more Coca-Cola, they think they can sell more product. When that starts happening, it’s like, what, what is the, the one with Coca-Cola? We are the world that they came in with that deal and they tried to, they tried to attack, they tried to take the movement that we could all just get along and, and they killed the movement. So the same thing’s happening here with capitalism trying to adopt woke. We’re a woke corporation. When that starts happening, woke starts disappearing.