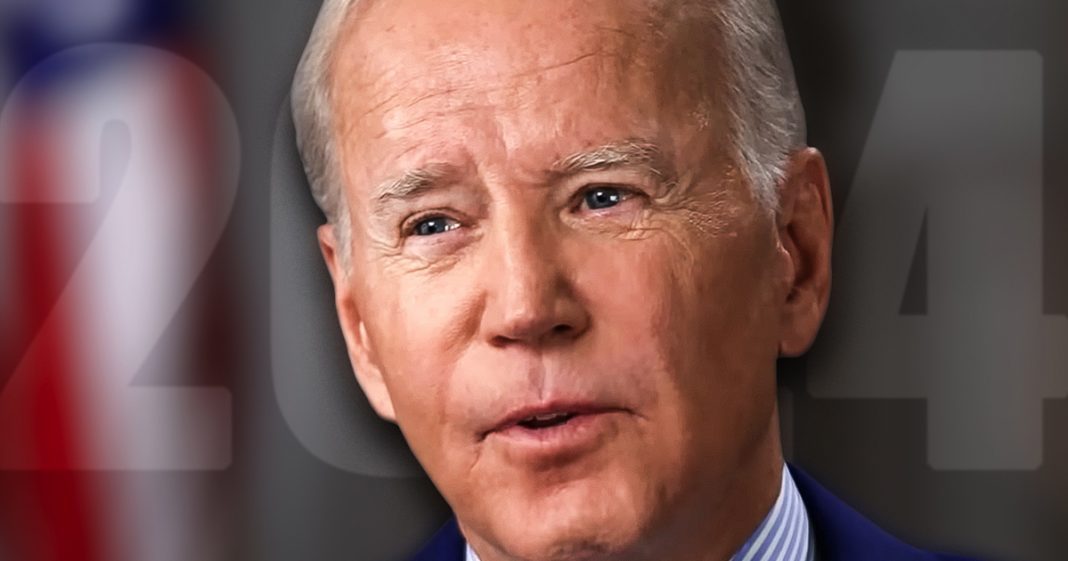 Biden said in a recent interview that he isn’t 100 percent sure he’ll run for a second term. Mike Papantonio & Farron Cousins discuss more.

Mike Papantonio:             Biden said in a recent interview that he isn’t a hundred percent sure he’s gonna run for a second term. Wow. Okay. So this ought to be a celebration by all Democrats moving into the midterms. He’s, the guy’s just, he’s DOA. I don’t, I don’t even think, I don’t even think he’s in charge of his government at this point. I think Susan Rice is running things, if you wanna know the truth. But anyway.

Farron Cousins:                  Well, for Biden to actually say this in this recent 60 Minutes interview, to me, that’s kind of a big deal. You know, he could have easily just said, well, yeah, why wouldn’t I seek a second term? That’s ridiculous. But he, he said, you know, I’ve always said it’s my intention, but only an intention.

Farron Cousins:                  You know, we’ll get down to it later on. And I do think he is leaving himself that window instead of boxing himself in. Remember when he first started running, he said, I’m only doing one term.

Mike Papantonio:             But he said, I’m gonna do one term and then I’m gone. So everybody said, okay, well, anything to get rid of Trump, that’s great. But you have to understand he’s not even in charge of government. I mean, take a, take a deep dive on this, maybe you and I outta to do a show, a segment on this. Take a look at how many decisions Susan Rice is making right now. I mean, big decisions. Now, Susan Rice, if you remember, was the person at the heart of the Iran, of Iraq. You know, she was part of the big lie.

Mike Papantonio:             The big lie about weapons of mass destruction. We knew that was a lie. She promoted it. She promoted with New York Times, she was the voice. And then she got Powell involved and tried to convince the American public that this is real. That there’s weapons of mass destruction. Susan Rice, you can hang all of that around her neck. That’s the person making decisions, I believe, for, for, for Biden right now.

Mike Papantonio:             I think it’s gonna be DeSantis versus Newsom. And I think that the, the pro, and we’ve talked about this before.

Mike Papantonio:             DeSantis is gonna, is gonna, is going to sweep Middle America. He’s gonna sweep the South and you’re gonna have that division of East Coast, West Coast, California, you know, New York, Eastern Seaboard. And I just don’t think, I don’t think Newsom can win. I think there’s a hank about California that has developed, right or wrong, it’s this, this attitude that people, I mean, my God, people trying to move from California to Montana or Colorado, you ought to hear what the locals out there think about California. And so I think Newsom’s got a tough, he’s a good politician. I think he’s a good candidate, but I think he’s to beat DeSantis, it’s gonna be, it’s gonna be an uphill battle.

Mike Papantonio:             Well, and again, they don’t like California. I mean, that’s not just me talking, it’s just this thing, this pervasive idea about California. And it’s not my idea. There’s tons of people who have written about it. And so you’ve got Newsom versus DeSantis and I think, I think DeSantis, unless he really screws up, takes, takes that.

Mike Papantonio:             That’s all for this week, but all of these segments are gonna be available this coming week right here on this channel. And you can follow us on Twitter @AmericasLawyer. I’m Mike Papantonio and this has been America’s Lawyer where we tell you the stories that corporate media won’t tell you because their advertisers won’t let them, Their political connections just don’t allow for it. We’ll see you next time.