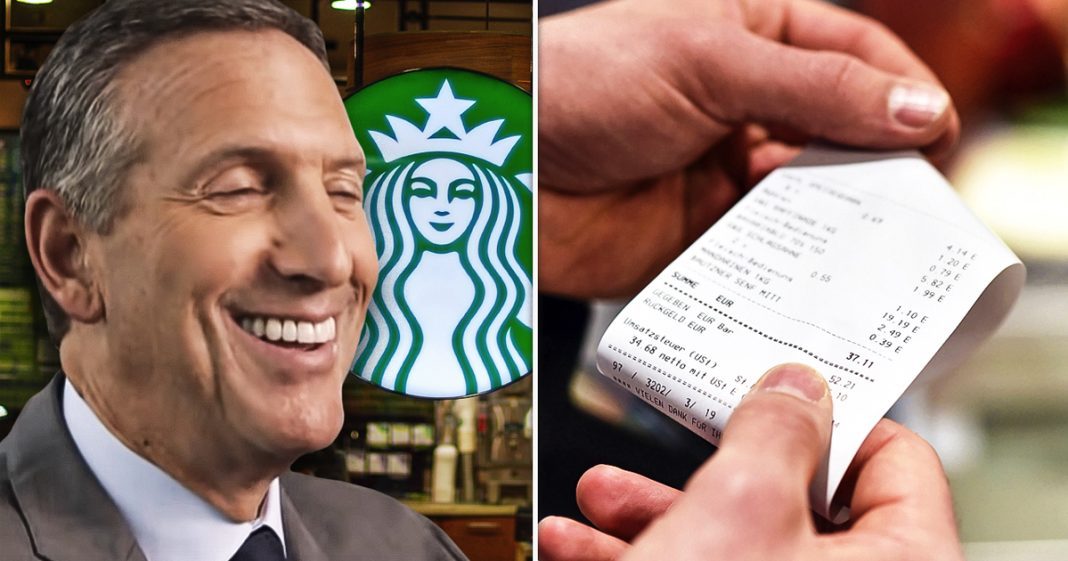 Starbucks CEO Howard Schultz has declared war on unions, but employees aren’t backing down. Plus, inflation is rising at an alarming rate, but the earnings reports from corporations tell us that price gouging is a major factor. Mike Papantonio & Farron Cousins discuss more.

Mike Papantonio:             Starbucks CEO, Howard Schultz has declared war on unions, but employees, well, they’re not backing down. I love that. You know, I thought back, do you remember when Hillary Clinton was going to make him secretary of labor?

Farron Cousins:                  Well much like Amazon, Starbucks has had this big effort to unionize their stores across the country and we’re starting to see successes pop up all over the place. So Schultz was recently asked, are you going to sit down in good faith and negotiate with these unions? You know, negotiate with the people to form the unions. And he flat out says, no.

Mike Papantonio:             Well, he’s, his, his argument is really a little ridiculous. He said, we’re a family here. We’re a family. This is the Starbucks family. These people working here, we, we’re just one big family that gets along. And if you allow, if you allow these union types to come in here, they’re gonna distort the process to where there’s gonna be a customer experience that’s bad. They’re, our employees are gonna actually be unhappy in the long run. And his position is no, we will not negotiate. Where does this go for Starbucks? I mean, there’s plenty of great coffee shops around the country.

Farron Cousins:                  So Starbucks is really kind of pushing the limits on what they need to do here. If there’s one thing we can find, it’s a cup of coffee in this country.

Farron Cousins:                  You know, we have seen just the last year or two, this massive push for more unions here in the United States, something that we’ve talked about’s been necessary for 20 years, but we haven’t seen it like this in this generation.

Mike Papantonio:             Inflation is rising at an alarming rate, but the earnings report from the corporations tell us that price gouging is a major factor. Wow. How about Tyson? Let’s lead off with that. It’s the Tyson story, right? Again, how many Tyson stories do we have to tell over the years? The Tyson story is $500 million is what they have gouged just in the last six months.

Farron Cousins:                  So they are, they’re basically admitting that yeah, we had to raise prices on consumers because they went up, but we tacked on an additional 25% Tyson tax. Let’s call it that. That’s what it is. It’s the Tyson tax.

Mike Papantonio:             Okay. So people say, well where, you know, what am I gonna do? Well, there’s a lot of people, there’s a lot of different companies. There’s Cargill, there’s JBS, there’s Sysco, there’s Hormel that you have a lot of manufacturers of meat products. Right. And so you have to make the decision to say, well, first of all, in the grocery, the cost of groceries, meat is the number one cost.

Mike Papantonio:             So don’t you say, well, I either go talk to this store and I tell ’em I don’t want that. I want some alternatives or you go somewhere else. I mean, takes some action on your part to say, this is wrong.

Farron Cousins:                  It really does. And you know, another good option too is for people to go try to find a local butcher shop. They they’re, they’re hard to find in some areas, but if you look hard enough, you’re gonna find one or at least, you know, a grocery store that has their own actual meat counter where they’re packaging and breaking it down. And that’s a good alternative because Tyson is telling us what so many other corporations are also telling us.

Mike Papantonio:             37% just in the last quarter is what they raised it. One, one thing about it that I, that I think about on this case is that so often you listen to a story like this and you go, ah, you know, Tyson. Well, you gotta do something about it, right? You have to say, okay, that’s wrong. I’m gonna go to Publix and I’m gonna say to Publix, you know, I want some alternatives. I don’t wanna buy Tyson. And if the Publix won’t do it, then you go to another chain and you say, I wanna buy from you because I know A, meat is the number one cost on a grocery list. And B, you’re not doing anything to push back against Tyson. Go somewhere else.

Farron Cousins:                  On top of that, meat is actually the number one driver of where people shop. They will go to a different grocery store if the quality of meat is better over here and buy the rest of the groceries there as well.

Farron Cousins:                  So you can really drive that conversation with these local grocery stores by saying, I’m not going to you because you’re only offering me Tyson. I’m taking my whole grocery bill down the street to the other market.

Mike Papantonio:             But it takes you doing something rather than just watching a segment like this and say, ah, that’s not right. And then you just go do the same thing.