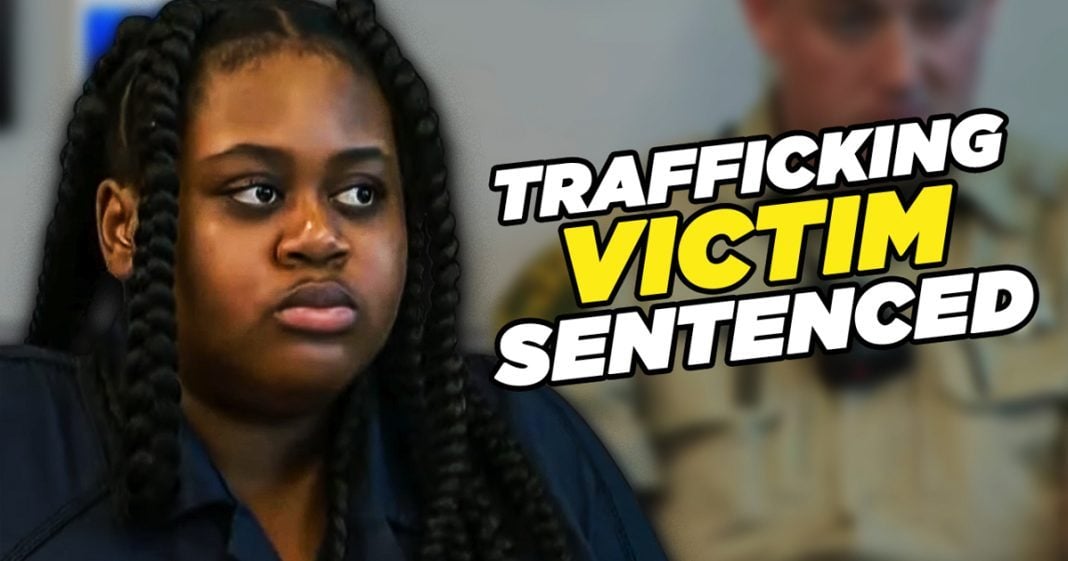 A human trafficking victim has been ordered to pay the family of a rapist that she killed $150 thousand dollars. Mike Papantonio & Farron Cousins discuss more.

Mike Papantonio:             A human trafficking victim has been ordered to pay the family of a rapist that she killed $150,000 instead of getting an award and the Nobel peace prize. This young girl was trafficked at 15, she was held prisoner, virtually held prisoner. She had the opportunity to get away by killing this man. She should, she, she was justified in doing it. Most states have what they call a safe harbor, harbor protection. She took a knife to him, stabbed him 30 times, made sure he was dead and, and you know, did what she had to do. She got out of there. Now, the point is Iowa did not have a safe harbor. They didn’t have a safe, they didn’t have a protection for that. First of all, if you take a look at a woman who’s been sodomized, been raped repeatedly by the same time has been, has been, has been sent to other people to be raped and sodomized. Then at, at what point do you look at a child who stabbed somebody 30 times and say, yeah, maybe I get this? Maybe I understand the rage. These prosecutors who even brought this case, I promise you are, are bottom rung prosecutors. If you look at their success rate as prosecutors, their conviction rate is probably really, really low. But here they had a woman, a young girl, 15 year old stabbed him 30 times. They said, well, we’re gonna win this one.

Farron Cousins:                  And, and he had raped her repeatedly at, one point raped her at knife point. And, and again, this is a trafficking victim who had left her house as a runaway to escape an abusive family. And she ended up sleeping in the hallways of this apartment building where a kind man took her in, but uh-oh, turns out he trafficked her and sent her off for sex, including to the rapist.

Farron Cousins:                  And here’s what gets me too. They, they, they’ve said, we’re not gonna put you in prison for this, which of course, this is clearly a case of self defense. But they put an ankle monitor on her because they told her as they were doing this, we don’t want you to return to your previous lifestyle.

Mike Papantonio:             Well, okay, here’s what they knew. Here’s what the pro I, I swear to you, you, I used to be a prosecutor myself. If you look at the records of prosecutors, you, you look at who, the prosecutor has the right to say, no, this is a non prosecution. I’m not going to do this. The, the facts allow me to make that decision unless the judge comes in and says, by God, you’re gonna do it. You have the right to say, I’m gonna null process. Okay. They didn’t do it. And I’m just guessing, I don’t know ’em, but I’ve seen it before. If you look at their, at their record for, for successful prosecutions, it’s probably dismal. So they thought, oh, this is one I’m gonna get a, I’m gonna get a conviction. Here’s where they put this, this, this girl now. Okay. It’s not only that she has an ankle bra, bracelet. It’s the $150,000 that she has to pay to the family because according to these pros, this is what the prosecutor said. Well, she’s failed to take responsibility for what she’s done. The prosecutors said that. They said, well, oh good God, she left the kids without a father. Good.

Mike Papantonio:             Daddy’s a rapist and that should be, they should be celebrating that he’s dead. Not that he, you know, that he left the kids without a father. But the ugly thing about it is I look at this is everybody at every turn had the right to do the right thing and they didn’t do it. And now anything she does, you understand, well, she’s on probation for five years. Anything she does to violate that probation could send her to prison for 20 years.

Farron Cousins:                  And, and, and, and we see this happen a lot of times with the victims. They can’t ever get the proper justice because the justice system, in many cases looks at these women and say, well, you brought this on yourself.

Mike Papantonio:             I’ve said it before, we have one of the most talented, young female trial lawyers that I’ve, that I’ve worked with here at this law firm that was, she was trafficked when she was 14 years old. Escaped when she was 17. I wish these prosecutors and this judge could sit down and talk to her and understand what this young girl inevitably went through and then say, yeah, this is a good idea. We’re gonna, poor, you know, she didn’t, she didn’t accept responsibility. Poor kids don’t have a daddy who’s, you know, a rapist. You know, that, that the, if you really follow this to the end, this is, this case is it’s FUBAR. This case is total FUBAR. Farron, thanks for joining me. Okay.

Mike Papantonio:             That’s all for this week but all of these segments are gonna be available the coming week right here on this channel. And you can follow us on Twitter @AmericasLawyer. I’m Mike Papantonio and this has been America’s Lawyer where we tell you stories every week that corporate media just refuses to tell because their advertisers won’t let ’em or their political connections are so so strong that it doesn’t allow for it. We’ll see you next time.