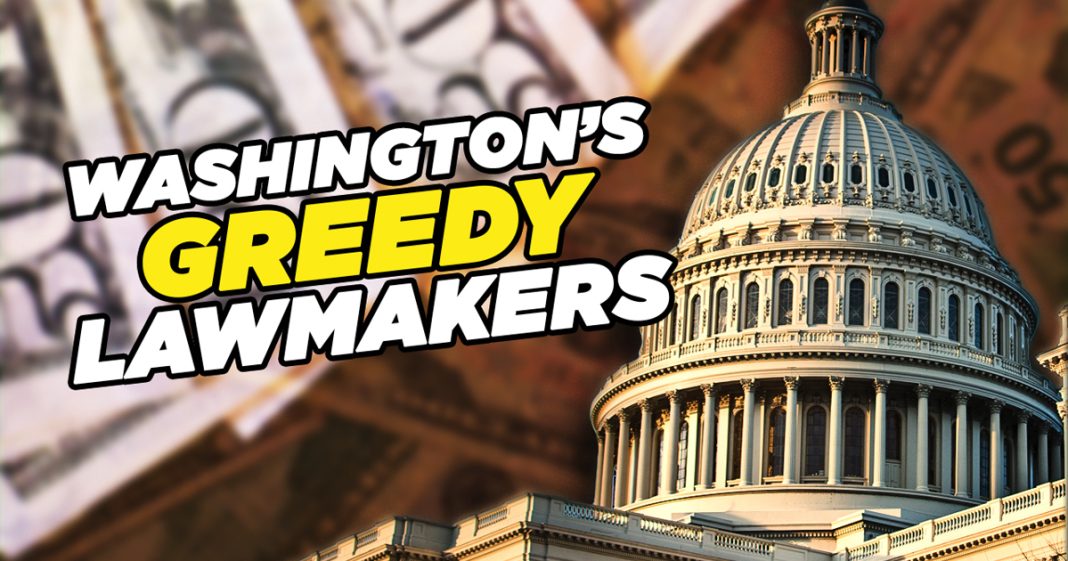 Mike Papantonio:             Stock trading by members of Congress is creating massive conflicts of interest for lawmakers. Ring of Fire’s Farron Cousins joins me to talk about it. We’ve done this story before, Farron. This is such a, this is such a simple solution, pass laws that say to congressmen that you may not trade stocks while you’re in office. Put it in a blind trust. This is, this is simple stuff. This just shows the level of greed that’s taking place up in Washington right now.

Farron Cousins:                  Right. And, and for the longest time it’s been Nancy Pelosi herself who has been stonewalling all of this and of course, we understand Pelosi’s husband makes a lot of stock trades. He’s been buying and selling stocks and things that Congress is working on. There, there’s no secret that this man has a very serious conflict of interest. And so Pelosi had for the longest time been the biggest roadblock. So finally, recently she says, all right, listen, we’ll, we’ll go forward with this. I’m okay with it now. And, and actually just last week, they were about to bring this legislation to the floor and then out of nowhere, I, I, I still cannot figure out why, Democratic Senator Jeff Merkley comes out and basically says, we’re not doing this right now. We’re gonna kick this can down the road. And.

Mike Papantonio:             Yeah. That’s the same caliber. If you look at Merkley’s history is great on progressive. I mean, he is just the best we could ask for. That’s just so out there. Now, Pelosi doesn’t surprise me because hubby has made millions of dollars with inside information that she’s provided. She says, oh no. This, you know what their defense is to Pelosi? Well, she doesn’t, she doesn’t own any stock. I swear to God, that’s, that’s their, well Nancy doesn’t own any stock. But look, the bigger story is this is you’ve got 3,700 conflict trades where they’ve looked at ’em. I say they, there’s been two or three entities that have, that have been studying this for a while, but let’s use the 3,700 conflict trades. Well, the conflict is that these are people that are on committees or they’re on assignments, they’re taking place with hearings and investigations on the very thing that they’re trading stock for. It’s insider trading. People go to prison for it unless you’re in Congress.

Farron Cousins:                  And, and what happens here, just so everybody understands is the way this works is, okay, we’ve got a hearing coming up with executives from some industry. So right before the hearing, I’m gonna sell my stock because I know the hearing is gonna make these guys look bad. The stock is gonna go down. That’s one example. The other is okay, we’re crafting a budget bill. We’re crafting a military bill. We’re about to send $8 million to Raytheon. Hey, broker, put some money into Raytheon for me before we pass this legislation, before it even leaves committee, the public doesn’t even know it exists. Those are things that actually happen with our elected officials and when they get caught, and this is something you and I have talked about too, the penalty for them is a $200 maximum fine.

Mike Papantonio:             Yeah. So he, he was actually involved in the hearings about the 737 max design defects and the, there were bad findings. They said, we gotta do, you remember it.

Mike Papantonio:             There planes falling outta the sky. Well, on inside information, he trade stocks and yeah, he reports it. Oh, by the way, I’m on the committee. I, I know about the investigation. I know all the bad stuff. Oh, I traded stocks and I made a lot of money. I saved a lot of money right now. Chris, what’s his, Chris Collins. I mean, involved in the investigation on whether or not a drug trial actually was successful or not. It was a disaster. Nobody knew it was a disaster. He tells his son, go trade stock. Oh, but he didn’t do it. It was only my family that did.

Farron Cousins:                  Well, and the only reason Chris Collins was one of the people to actually pay a price for this, you know, he was, was convicted was because he was caught on video making the phone call.

Farron Cousins:                  Everybody else is a little bit smarter. He actually walked out into an open public area, made the phone call, like during the hearing I think it was. And so everybody said, wow, this is pretty obvious. You gotta do something.

Farron Cousins:                  And, and according to the numbers, there’s also bipartisan support to pass legislation to stop it.

Mike Papantonio:             They’re not gonna do anything. They’ve been kicking it down the road for three years.

Mike Papantonio:             Okay. Maybe even longer than that. But the point is it’s insider trading. These people are going into Congress, they’re worth $500,000. When they come out, they’re worth $5 million, $10 million and this is how they do it. It’s insider trading. We throw people in prison for it. And the very, very idea of Merkley trying to stop this is very disheartening to me.