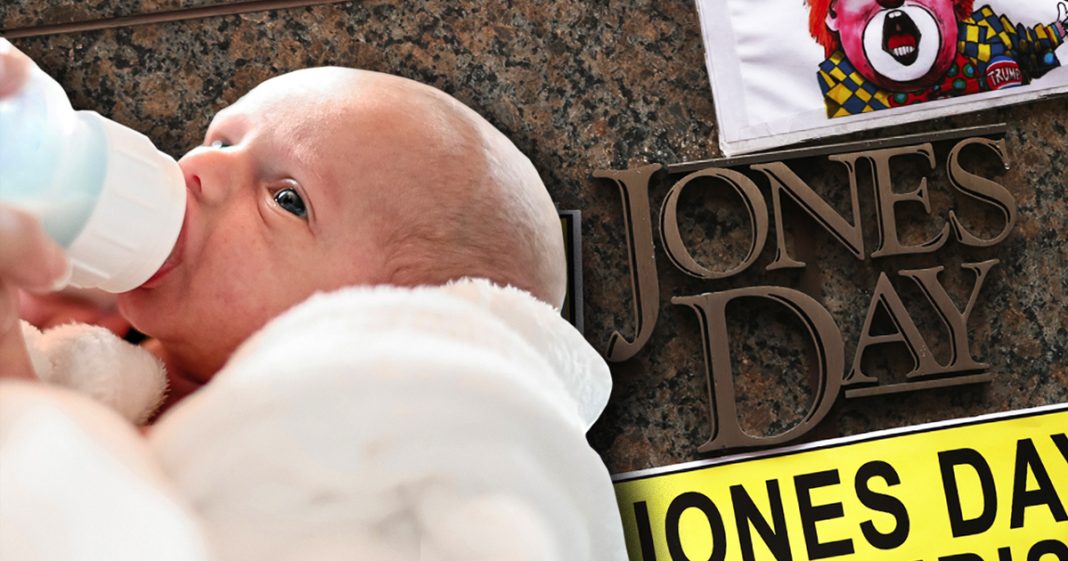 Click here to find out more about baby formula lawsuits.

Mike Papantonio:             A major corporate law firm helped cover up the fact that infants were getting brain damage from contaminated baby formula. Now, let me tell you this Jones Day, I have worked against Jones Day on more corporate conduct, I mean the ugliest of the ugliest, Farron. And these folks, it seems like they seek out, they literally seek out the worst clients that they can possibly represent because those worst climates, clients always pay the biggest bout of money, amount of money. But this Jones Day, I, I wanna spend a second on this. People don’t understand when we talk about some of the appointments that Democrats make that are no different from Republicans, they don’t understand what we’re saying. Jones Day is the kind of law firm that defendants, that Democrats go to, to put on court appointments. That’s always gone on and when we talk about how crazy the Democrats appointments are, that’s what we’re talking about.

Mike Papantonio:             We’re talking about stuff like Eric Holder, for example, coming from Covington Burling in, in, in, in Washington DC, where all he did was represented corporate criminals. And no corporate criminal went to jail when he was in charge, no matter how bad the conduct was. But Jones Day is the kind of place they get these people. And I’m not, I’m not exaggerating. These people, it’s, they’re, they’re, it’s a scorched earth attitude. They, they don’t care. They will represent Satan if Satan pays enough money,

Farron Cousins:                  That, that is absolutely the best way to put it. And with this particular case here, and I’m really kind of shocked that New York Times went after them as, as tough as they did in this piece they put out, but we’re talking about infants. We’re talking about babies that were left with permanent brain damage from contaminated baby formula put out there by Abbott. And what Abbott did, they hired Jones Day and Jones Day essentially flooded the plaintiff’s lawyers with documents, huge boxes.

Farron Cousins:                  Yeah. And the reason they do that, the useless documents of course is the most important part is they say, okay, you gotta go through every one of these now. We’ll wait. We’ll sit here and drag this out for seven or eight years if we have to.

Mike Papantonio:             They don’t just give you a bunch of useless documents. I mean, it takes the staff around here, this is all we handle are these complex cases and so we have to staff up and go through 10 million documents. But the truth is they destroy so many documents. We catch ’em because there’s always a pattern. I mean, it’s a very distinctive pattern that we always catch ’em, but they want, they don’t think a thing about destroying documents to say, yeah, we knew this stuff was killing people. Yeah, we kept it out there anyway. And yeah, we made a lot of money. They would think nothing about destroying that document. And unfortunately the federal courts don’t punish ’em enough every time we catch ’em and we catch ’em all the time. And you say, judge, really, you’re just gonna let this go? You’re gonna what, hit ’em for a hundred thousand dollars? These, these people should lose their license to practice law.

Farron Cousins:                  Well, and I think a lot of people need to understand too, this is why when you have these very complex cases and the story points out too, these are little local lawyers, you know, they run their little local commercials. They have a staff of five people.

Farron Cousins:                  And then suddenly at their doorstep they end up with 20 million documents to go through. They can’t do it for their little local client. And it’s, it’s so heartbreaking that these families who now have a child that is gonna be dependent on them for eternity.

Farron Cousins:                  Because this tainted baby formula, or maybe it’s from a different, you know, agricultural issue or fossil fuel issue, whatever it is, it’s the same pattern all over the country.

Mike Papantonio:             Farron, can you imagine being the silk stocking law, lawyer at Jones Day, okay. You’re getting paid your money. They give your little cubicle somewhere in New York or LA. You’re sitting in your cubicle. You come home and it’s a victory. You proclaim victory because you kept that mother from, from, from, from getting paid for the loss of her child or for the brain damage that that product called the, caused the baby where the mother has to take care of that child the rest of your life. And you are so, you’re so upside down. You’re, you’re, you’re, you’re just so shallow that you go home with your family and you proclaim you had a good day. You had a victory. What in the hell goes through the mind of somebody like that? We work, we work right across the table from ’em all the time. The good news is we usually do pretty good.

Farron Cousins:                  Yeah. I mean, you’re talking about people that go home and say, honey, it’s great. I might make partner because this woman whose baby we killed didn’t get any money.