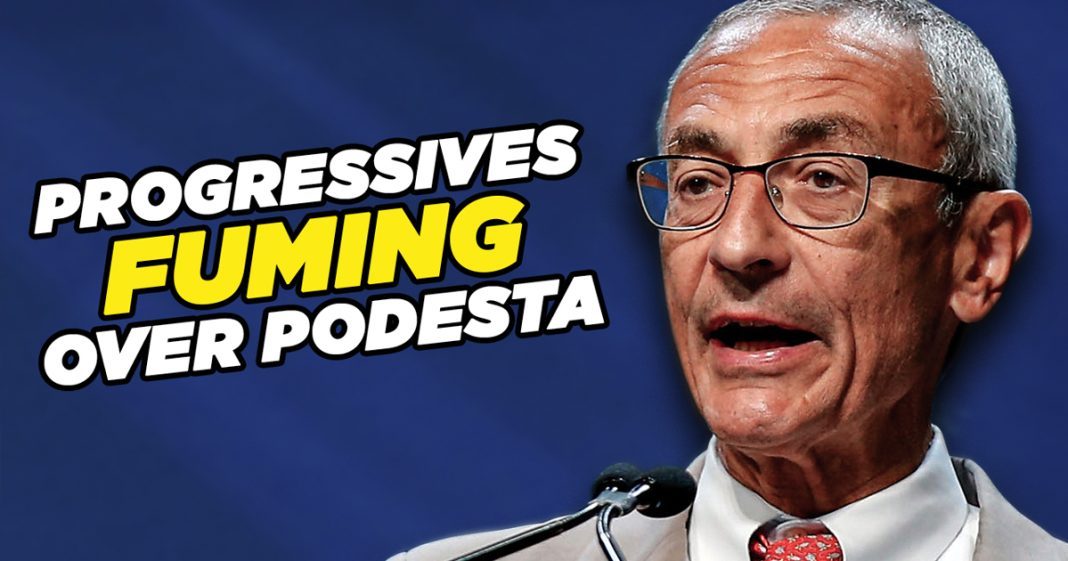 Mike Papantonio:             Present Biden is tapped John Podesta to head up his clean energy program, a move that has progressives fuming. You’re fuming about it aren’t you? How many, how many Podesta stories did we do when he was the guy that lost an election for Hillary Clinton that was impossible to lose? How do you lose against a crazy man like Donald Trump? We, everybody understood he was crazy then. But him and his brother have been Democrat, they’ve been hangers on for so long. Hillary Clinton has protected this guy for some reason. I don’t know why. But Podesta has been brought along. He, he, his lost, his, his win to loss ratio is deplorable. He’s, he has lost more political races probably than anybody in the business. Now this is his new payoff. Tell the viewers what it is.

Farron Cousins:                  Yeah. President Biden, as part of the Inflation Reduction Act, the IRA, it has those big, you know, funding mechanisms for clean energy here in the United States, which is wonderful. But then he says, now I’m gonna pick this guy who’s just been hanging around DC since the nineties with the Clintons. Obama had him on board for a couple things where there were some big issues with his conflicts of interest. I’ll just bring him back.

Mike Papantonio:             They should have a big L right there on his forehead. The guy is, he’s been a loser in the political game forever, but he’s still here. Now, what about his background in energy? Talk about that little bit.

Farron Cousins:                  Is what it’s called. Not to be confused with the other bad company Juul, but it was a company that was basically funded by Russian energy interests.

Farron Cousins:                  And Podesta goes, gets on the board, get tons of shares of this company. They’re working with diesel fuel. They’re also doing a little bit with biofuels, but that’s kind of the window dressing. It’s really just a diesel fuel.

Mike Papantonio:             And they were using Podesta to move into American politics and raise money. Okay. They raised a lot of money while he was running Clinton’s campaign. They lost. What happens after they lost the Clinton campaign? It, money dries up. They go outta business. This was not a warm and fuzzy company that he was in charge of.

Mike Papantonio:             Okay. This was a company, as you say, had real, it’s nothing but a fuel company. And they were extracting every bit of fuel wherever it was. They were promoting the same kind of fuel drilling that every one of these fuel companies have been promoting. But nevertheless, Biden doesn’t seem to understand that or nobody’s told him about it or maybe he knew it one time and he forgot. I don’t know. But he’s the guy that he’s put in charge of climate.

Farron Cousins:                  Right. And, and when Obama appointed him to basically do the same thing with his administration that Biden’s chosen him for, there was a big issue with the conflict of interest with him and the energy company.

Farron Cousins:                  So he still got the money from it and was pushing, obviously the policies they wanted while in the White House with Obama.

Mike Papantonio:             All the money, all the special interest money is still moving into the Podesta estate by way of the kids.