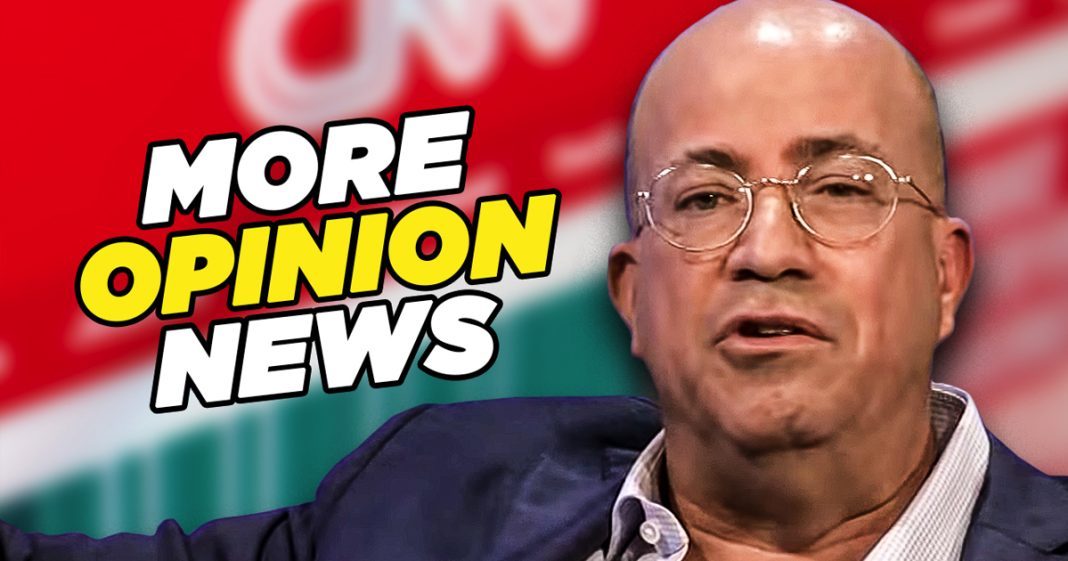 CNN wants to become more “neutral,” but the network might be too far gone to save itself. Mike Papantonio & Farron Cousins discuss more.

Mike Papantonio:             CNN wants to become more neutral, but the network might be too far gone to save itself. Where in the hell is that little Zucker guy that ruined it? I remember, I remember being in a room with, I mean, you know, anyway, he, I, I just, just remember thinking this Zucker guy started out as a producer. I mean, he was, did, you know, he did produced a couple of big shows on CNN and all of a sudden they put him in charge of this. And then he says my goal, he builds it around his preference.

Farron Cousins:                  You know, get, get a little more fiery. He wanted that crossfire type atmosphere of yell at each other, be bombastic, you know, give your opinion on things instead of saying, look, we’re a news outlet. Let’s talk about the news.

Farron Cousins:                  But then you got people that really didn’t stand for anything. They didn’t have real opinions that anybody cared about unlike what Fox has on the right. So it was a total flop. So they bring in new guy, Chris Licht and Licht is, you know, getting rid of people left and right. Some who absolutely should have been let go years ago.

Mike Papantonio:             Oh, Toobin. Can you imagine fondling himself on live, on the air and, and they, they keep him around? First of all, he’s, he’s, he’s, he’s really a very marginal lawyer where it comes to giving opinions. He, he’s one of these, he’s ivory tower lawyer. You know, he can talk about the intricacies of the constitution, but where it comes to really everyday advice, he was awful. Brian Stelter, they should have understood immediately that this guy was on some kind of jihad that was alienating everybody that was in the middle. If you weren’t, if it wasn’t extreme left, this guy had no appeal. But that kind of became the whole Zucker plan. Zucker destroyed this network. That’s what I’m trying to say.

Mike Papantonio:             I looked it, I looked up the other day to trying to find where the hell is this little guy. I mean, is he gonna move on? Are they gonna, somebody else gonna hire him in the media to destroy their network? It’s, it’s a weird situation when you, when you get into this system, this system that exists in, I don’t even call it news anymore. It’s cause news entertainment. But it, the way it perpetuates itself until the very point of destruction, and that’s what happened with CNN.

Farron Cousins:                  Right. And it is interesting now because you have a lot of people at the network who think, oh no, we’re going to the right. And you know, people who say, oh no, it’s going more to the left. The network doesn’t know where it’s going because they’re already too late to fill either one of those niches. You’ve got MSNBC that’s got the left. Fox and Newsmax now that have the right. CNN no longer fits in. You’ve got CNBC and Fox Business for the business side. CNN, even though they originated this, they got nowhere left to go.

Mike Papantonio:             Al Franken, a whole lineup of people. And we knew then, I mean, we were, all we were, were progressive. We, that’s all we talked about was progressive. And we understood then, we saw it within a period of two years, that it wasn’t sustainable. I mean, we would have people that would just, this is all they listened to. They loved it. And they loved to hear our attacks on the right. They loved to hear all of that stuff every day. But we saw that it wasn’t sustainable as a business. And we stayed in business two and a half years. But the, the point is to, to operate at the level of CNN and, and understand that what they were doing was not sustainable. It’s like we do on this show. Okay.

Mike Papantonio:             I mean, genuinely. I, I genuinely don’t care because we try to call it in the middle and you do the, you know, you go after the Republicans with vengeance every day and we have one segment or two segments or three segments, four segments a week where we say, let’s just talk about the middle. And to me, this is my attitude, if they don’t like it, we don’t need ’em. Who the hell cares?

Mike Papantonio:             You know, that’s, that’s really my attitude. They should have taken the same attitude.

Mike Papantonio:             Well, full disclosure, we, you know, if somebody attacks you because personally, if they attack me personally, our guys have the marching orders. They, they’re no longer invited to this network. And the whole idea is we want to talk about the middle. We’ll get rid, I, I think we probably get rid of a hundred a month that come in, rather than wanting to talk about issues like you and I wanna talk about, they want to talk about, well, Farron’s too left, Papantonio’s too middle, you know, I don’t really care anymore. I, I really don’t. That should have been the attitude that CNN took. But instead they catered to that crazy, crazy fringe and they, it just, it put ’em outta business. Do, will they make a comeback?

Farron Cousins:                  I don’t see how they can because there’s no place ideologically left for them to fit. If they wanted to be a straight news network, well, the country doesn’t care anymore.

Mike Papantonio:             But you still understand that we still have to do stories that move to the middle and we call balls and strikes.

Mike Papantonio:             And I hope you have the same attitude I have. My attitude is if they can’t take it, go to Huff Post. Go to some of the other fringe sites that all they do is talk left. That ain’t this. That’s just not us. And I just think they could have stayed in business if somebody was said, Zucker, you idiot. Look at what you’re doing to us. You’re collecting nothing but crazy fringe. And you know what, when time’s change, you’re gonna be outta business.