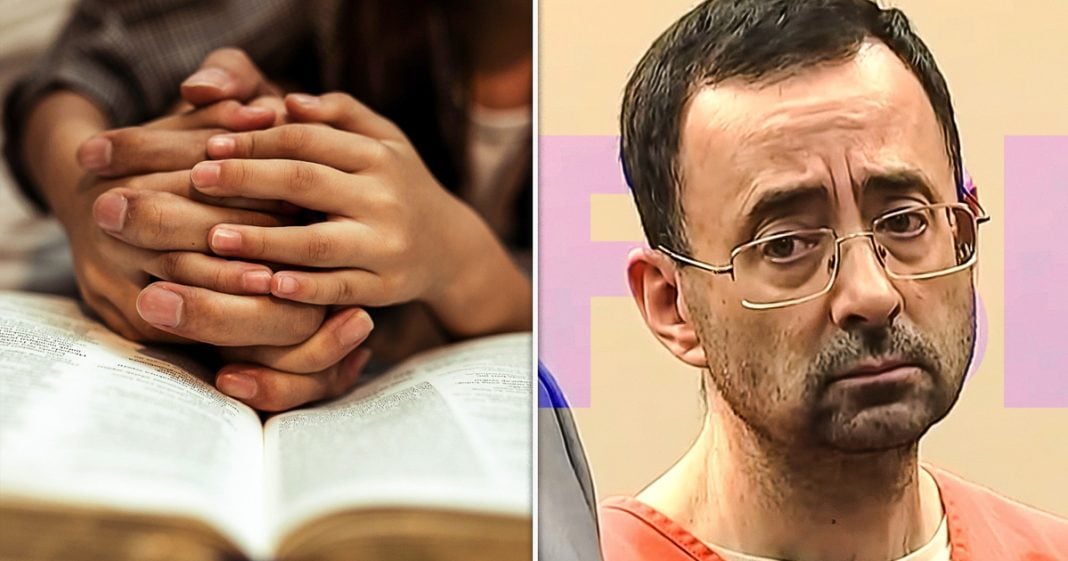 It was revealed recently that the Southern Baptist Convention has been covering up allegations of sexual abuse for decades. Also, the women who were abused by Larry Nassar during their gymnastics careers are suing the FBI for failing to take action when they warned about what was happening. Mike Papantonio & Farron Cousins discuss.

Mike Papantonio:             It was revealed recently that the Southern Baptist Convention has been covering up allegations of sexual abuse for decades and Ring of Fire’s Farron Cousins joins me to talk about this and many other issues. Finally, this story’s being told. You know, I, I look at this story it’s, they’re, they’re doing a little bit better than the Catholics have done. Catholics have covered this since 1940s and 50s. But now they did an independent search, they did an independent study and the independent study was not good for them, but they’re, they’re willing to talk about it. What’s your take.

Farron Cousins:                  Yeah. You know, at least they’re admitting, okay, we’ve got some problems and yes, we, the way we’re structured basically is what led to a lot of these problems and that’s really something that I think most people don’t quite understand here. The Southern Baptist Convention isn’t necessarily like the Catholic church. The Catholic church has dominion over all Catholic churches. They’re all interconnected. With Southern Baptist, each church is basically allowed to do their own thing. We’re not gonna oversee you or dictate you. We don’t even get involved in your problems for the most part. So that’s what actually led to a lot of these problems because they’re happening at these independent congregations. So starting in about 2007, I think it was, they started getting these reports in to the main body of the Southern Baptist Convention and that’s when things start to go a little south for the whole thing. They, they knew that these complaints were coming in. They weren’t exactly taking the action. They said, okay, well, we’re gonna let you guys, you deal with this. This is your business. We’re just here to, you know, sign the paperwork.

Mike Papantonio:             Okay. Same conduct we, we see with the Catholic church, we see with the Mormon church, we see with all of these cults that are arising everywhere. Okay. So suppress the reports, do everything that you can to suppress the reports. Cover it up, make sure it doesn’t ever see the light of day, whether it’s sexual abuse, no matter how horrendous the sexual abuse is. And then resist reform. Okay. As long as we can, resist reform, we don’t want to talk about it, because it’s gonna hurt us. And then the other thing is vilify and attack the people who are making the accusations and hope they go away. Isn’t that kind of what’s happened here?

Farron Cousins:                  Oh, absolutely. And you know, that is also another big part of this too. It’s not just, we’re gonna ignore it. We’re gonna pretend it’s not happening. We don’t want the bad publicity. It is, let’s discredit the men and women that are coming forward with these allegations of abuse. These people that have been through these horrifically traumatizing experiences, let’s make their life hell.

Farron Cousins:                  Let, let’s make it so much worse for them rather than admitting and solving a problem. Listen, there’s so many organizations out there that have had instances like this, you know, whether it’s the Boy Scouts, the Catholic churches as we mentioned, we’ve talked about tons of ’em on this show. The difference is what do you do with this?

Farron Cousins:                  Make sure you let people know that, yeah, we had a problem. We’ve fixed it. We’re making sure there’s no other problems. It always comes back to the cover up and it always ends up getting exposed, which makes the problem 10 times worse for the organization.

Mike Papantonio:             Yeah. They protect and support the abuser. They vilify the victim. They, matter of fact in this there’s, there’s a real split here in the, I don’t, I know you’ve seen this. There’s two very distinctive divisions in the Southern, in this story. One is that, that division that says, well, we’re just gonna attack everybody. We’re just gonna say, matter of fact, one of, one, a woman that came forward to help get this out there, they said it was a satanic scheme to distract from our evangelism. So you have that side. And then you’ve got other folks that are saying, no, this is a good thing because we can come up with a system like the Catholics still refuse to do, you know, since 1940, they still won’t do it. They’re still clergy, you know, sexually abusing across the board. There’s still priests and that move up the, the ladder of importance in the Catholic church and they don’t do anything about it. But the, the Southern Baptist are saying, well, you know, at least part of them are saying, this is a great opportunity because we can fix this right now if we’ll get hands on. What, you think, to me do you see some differences here?

Farron Cousins:                  I absolutely see differences. I mean, the Catholic church would rather, you know, just kind of bury their heads in the sands. Pretend that, oh no, this isn’t a problem. That person was moved. Well, you didn’t mention that they were just moved two towns over and given a whole new congregation, everything was covered up. At least with this one, there are plenty of people on the inside who say, we have to do something about this. These individuals have to go. This story has to be publicized. And, and going back to that as well I, I know there’s been a lot of news happening in the last two weeks, but this story has already died.

Farron Cousins:                  And that’s, what’s truly remarkable. I mean, you’ve got, you know, countless victims here that are seeking justice, that are trying to speak out.

Mike Papantonio:             Yeah. So you’ve got two things that can come out of this, that the Catholics we’re to do a long time ago, that the Boy Scouts were told to do a long time ago, that the Mormon church was told to do a long time ago. Didn’t do it. That is to have a centralized information service. A center where we keep up with this music teacher who has been reported three times for improper conduct with children, put that into a centralized system where we can take a look and we can find out where these people are and what are they doing. That’s the first thing. And the second thing is they’re talking about doing away with the non-disclosure agreements, to where, if your pros, if, if we come after you and you have to pay money, you can’t hide that. This non-disclosure thing is not gonna be permitted anymore because it’s so destructive.

Farron Cousins:                  Right. And that again, huge problem with all of these organizations is that if allegations have been leveled against one person and it’s not publicized, there is no way for them to know when they try to move to a different area that this has happened with this individual.

Mike Papantonio:             The women who were abused by Larry Nassar during their gymnast careers are soon the FBI for failing to take action that they were warned about. They were told upfront, look, this is happening. They were told in 2015, they had reams of information in 2015, understand. Most of the, most of the bad, really bad stuff happened between 2017 and 2019. But in 2015, they’ve got witness statements. They’ve got, they’ve got victim statements. They’ve got doctor statements. Yeah, this is all true. The FBI did not do their job and they, you know, they were sued, what the lawsuit that took place for the school shooting, you know, they were hit for $125 million. That should happen here, shouldn’t it?

Farron Cousins:                  Oh, absolutely. And, and, you know, like you said, the FBI was told and he was allowed to stay on the job while the FBI was just kind of toying around with, well, do we launch an investigation? Do we not? Do we even approach him? Do we talk to him? And all the while this was happening, the FBI’s ringing their hands, this man was still, as far as we know, abusing more and more women. They allowed, allowed more victims to, to happen.

Mike Papantonio:             Give me your landing on it. What was it about? How in the world does somebody, this is their only job. I mean, that’s the job the FBI’s supposed to take care of. And I, I realize there’s laziness. There’s just half kind of thinking with every governmental agency. But we hope the FBI that, that, you know, we don’t constantly see ’em screw up after screw up like we saw with 9/11, like we saw with, with the Marjory Stoneman high, where the shooting took place, they were warned ahead of time it was gonna happen. They did nothing. At some point, what, what is that about?

Farron Cousins:                  Um, I, I think at this particular instance, you still have this mentality that permeates this, that, oh, these girls are making it up. You know, these are young women. Oh, look, you’ve accomplished so much. What are you really complaining about? I still think you have a lot of that mentality, not just with the FBI, but throughout all the country. You know, we, we’ve seen it a lot with people coming forward with allegations of abuse. The first reaction of half the country is, ah, she’s making.

Farron Cousins:                  So, so a lot of that, you know, Larry Nassar was in this big position of power with USA gymnastics. Nobody wanted to ruffle any feathers, because that’s where all the Olympians were coming from.

Mike Papantonio:             So how many, how many young girls were molested because of it, 90 claimants conservatively that have come forward ,more than a hundred they think the claim. Now here’s, here’s where it really gets ugly. They didn’t, it’s not that they were lazy. They actually phonied up reports and didn’t tell the truth to the Inspector General’s office. When the Inspector General started looking at, they were phoning stuff up to make it look like they had done their job. They phonied up stuff to make it look like, ah, there’s nothing to see here. That’s the frigging FBI and we ought expect more. And I, I was so glad when, when they, they hit ’em for $127 million with the high school shooting there at Marjory Stoneman high, because they had been warned years in advance that there was a problem here.

Farron Cousins:                  Well, and, and I hope that this lawsuit is successful. Right now, they’re suing for about a billion and of course you do have those advising FBI, you need to make a settlement. You know you messed up. The evidence against you right now is absolutely overwhelming. You’re not gonna win if this goes to a jury trial.

Mike Papantonio:             And they know there’s an uglier story that needs to be told. And we’ll tell it right here and hopefully the media.

Mike Papantonio:             I don’t think, I don’t, maybe corporate media will actually tell that story, but I know we’ll be telling it right here.