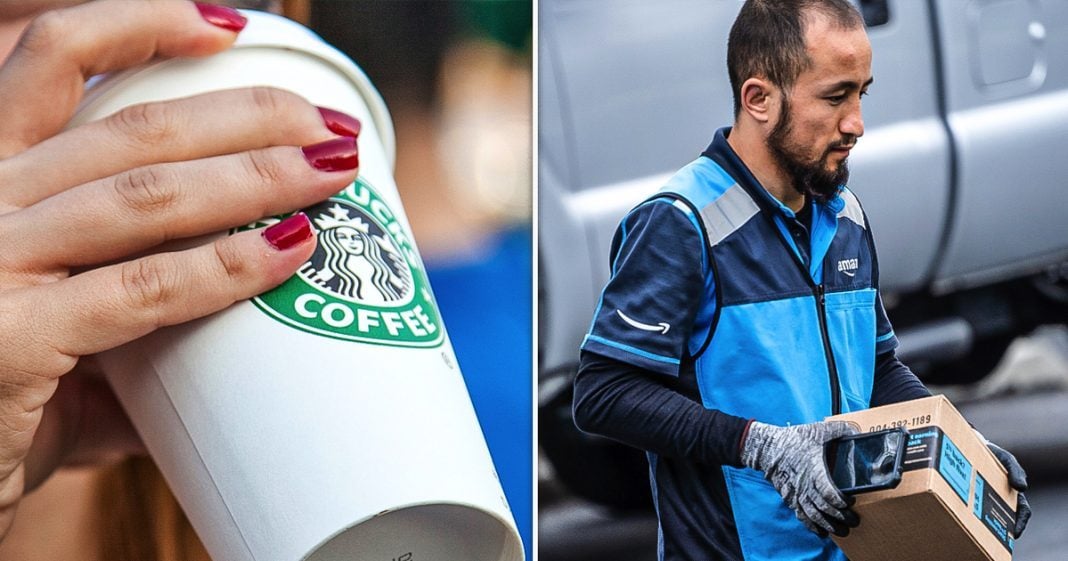 Starbucks is fighting unionization efforts at their stores, and the company appears willing to break the law to achieve their goal. Plus, the National Labor Board has uncovered even more evidence of Amazon trying to bust up unions by threatening workers. Mike Papantonio & Farron Cousins discuss more.

Mike Papantonio:             Starbucks is fighting unionization efforts at their stores and the company appears to be willing to break the law to get there. Ring of Fire’s Farron Cousins joins me now talk about this in many other issues. And the guy I say is honestly the best voice in progressive media. I really do mean that.

Mike Papantonio:             And, and so I appreciate that. I, it’s, it’s a pleasure talking to you. I want to ask you about this. As I looked about it, as I looked at this story, the most incredible thing that I found is that they’ve been down this road before. We’ve seen big corporations get spanked for doing exactly what Amazon is doing. I mean, yeah, well I say Amazon.

Farron Cousins:                  Right. I mean that, that actually we have done plenty of segments where Amazon was the carbon copy. They did everything you’re mentioning here. And now of course, Starbucks says, well, hey, Amazon had some success with it. Let’s try it ourselves. And so the National Labor Relations Board has hit them with this massive lawsuit, alleging at least that we know of 200 instances of breaking federal labor laws. And a lot of it, of course, does have to do with the retaliation against these employees. You know, firing anybody who says, hey, what if we started a union? Starbucks immediately steps in and says, hey, what if you didn’t have a job here anymore?

Farron Cousins:                  And, and even worse, last week it was revealed that Howard Schultz, the guy that runs Starbucks said on a call, hey, we’re gonna give everybody raises except the unionized workforce. We’re not giving them any new benefits, but I’m gonna take such good care of all my other non-union employees, which of course that tactic illegal. And that is seen as a, a form of union busting by, by not giving the benefits to everybody.

Mike Papantonio:             Okay. So he, you know, his big talking point when he put all this together, the whole Starbucks picture is we’re partners. A, we’re partners and oh, by the way, we’re one of the most progressive companies in the market. Really? Progressive company. So, so progressive has a whole new meaning if I look at what this guy did and I look what, what Bezos is doing with Amazon and so many of these tech companies. I mean it, the tech companies plus this, it, it’s the same, it’s the same foundation every time we see it. Look, people need to look if, if you’re watching this and you’re, you’re, you’re wondering what rights do I have? The section seven of the, the NLRA tells you everything that you can and can’t do. And I think it’s really important that people understand this kind of thing has digressed to where you have Starbucks saying you can’t even wear a pin on your, on your shirt that talks about union. That says, I’m a member of a union or I want to, or please start a union. You can’t wear a pin like that.

Farron Cousins:                  And we care about only social issues on the surface. And that’s how they get away with this crap too, pretending to be progressive companies. They say, well, look, look we’re, we’re letting you wear these buttons. We support the LGBT community.

Mike Papantonio:             Bring your computer in, drink a latte and you’re gonna be among friends.

Mike Papantonio:             It’s, it’s like, it, it comes from progressive organizations. It comes from people who really do wear that mantle, we’re progressive for the very reasons that you point out. Yeah, we’re good on some social issues. But where it comes to you making money. Nah, we’re not so progressive.

Mike Papantonio:             All right. So the national labor board has uncovered an even, even more evidence against Amazon trying to bust up unions. Now you raised this to me and I, I just think you were completely correct. This tells me maybe that we shouldn’t be loaning 10 billion, not loaning giving $10 billion to the folks running Amazon, which is what we’ve done. We, we gave Bezos the government, just what a couple of months ago.

Mike Papantonio:             Gave him $10 billion and he, at this point is probably one of the premier union busters in the country. And we shouldn’t, we shouldn’t reward that. I think Bernie Sanders came out and said, this is crazy.

Farron Cousins:                  Yeah. Bernie, Bernie is about the only one who says, you know, wake up people. This is insanity giving this company billions of dollars while they’re spending millions to bust up these unions. And of course, what we’ve found now is, or the labor board found is Amazon is sitting there threatening their employees with wage cuts if they vote to form a union. And of course they’re doing it in their very corporate lawyery kind of way saying, well, we’re gonna have to drop you all down to the state minimum wage here if you vote to form a union, because we gotta keep wages with your union contract, but that’s gonna take a couple years to negotiate fully. So you’re down to, you know, whatever your state’s minimum wage is.

Mike Papantonio:             I’m gonna take your insurance. No benefits. No. I mean, so, so here we got a guy that, oh, by the way, everybody’s seeing it, is he positioning himself for a run for president? I mean, that’s kind of the next thing we see out of this, out of Bezos, isn’t it?

Farron Cousins:                  It, it feels like it’s happening because he is starting to get more vocal about politics. Whereas he hadn’t necessarily been before. He’s got a huge platform to back him up with the Washington Post. I mean, that’s. That, that used to be look, in the early days of this country, when you owned a newspaper, you could do whatever the hell you wanted.

Farron Cousins:                  And Bezos again, with his constant interjections into politics. He’s following Elon Musk. But Bezos is positioned, he’s got a highly successful company. One that whether you love him or hate him, everybody uses it.

Farron Cousins:                  Let’s be honest. And he’s got the name recognition. Biden and Trump are both horrible in the polls. Majority of voters want a third party candidate.

Mike Papantonio:             Perot, Ross Perot. Look, the, the average person out there says, well, my God, he’s built a big business. He must be a smart guy. He’s been to space. Let’s make him president of the United States. It could happen.

Mike Papantonio:             I think that’s where, I think that’s what Bezos is up to. Even though he’s just trashing the possibilities of these workers having any unions at all, and we seem to, it doesn’t bother anybody. Let’s give them $10 billion.