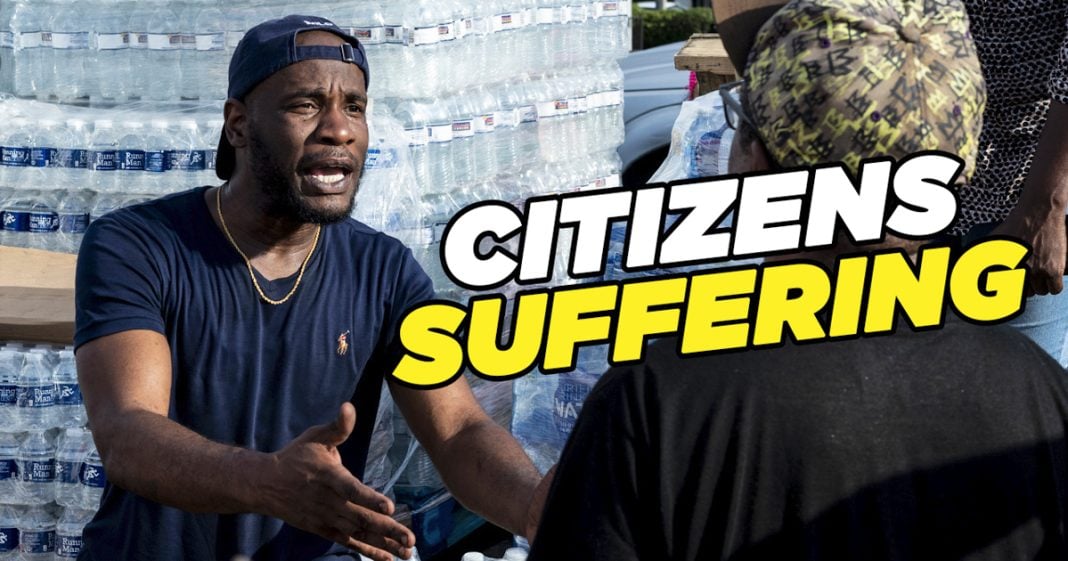 The city of Jackson, Mississippi was left without usable water for over a week following severe floods in the state. Attorney Michael Bixby, filing in for Mike Papantonio this week, is joined by Farron Cousins to discuss more.

Michael Bixby:                    The city of Jackson, Mississippi was left without usable water for over a week following severe floods in the state. Farron, this story is, is sad. I mean, the more I read about the human element of this story, the more I read about just human suffering of regular people, people who are middle class, people who are lower, lower class, people who just are trying to make it, I, I think it goes much more than the one week being without water. I mean, this is a much bigger issue. Talk to the viewers about what’s, what’s Jackson, Mississippi facing here.

Farron Cousins:                  Right now and like you said, for, for quite some time, they’ve been facing a massive water crisis as have many other places in the United States. But Jackson is a little bit unique. We’re talking about the capital city of Mississippi. You do have a large minority population there. And these people have been neglected by the state, which ironic considering that’s where the, the capital is. That’s where all the lawmakers are. But the big floods came through, you know, two weeks ago, basically knocked out their whole water infrastructure. The pumps wouldn’t work. You’re getting raw sewage coming out. People were told, don’t drink it. Don’t shower in it. Don’t get it on your body because this is bad, bad stuff. And then I guess it was late on Labor Day, late Labor Day evening, governor Tate Reeves finally came out and said, okay, the water pressure’s back. We, we’re not totally fixed, but you can actually turn on the tap and stuff will come out. Whether or not it’s super safe to drink or use, that’s debatable, but he said, you got your pressure back.

Michael Bixby:                    Right. And, but to me what this raises and I think what it needs to draw the focus to is the larger problem because again, I think just, I would encourage people to look at the human element stories here. I mean, you have people talking about spending hundreds of dollars on, on bottles, bottles of water essentially a month, just to be able to have drink, to have drinking water in the United States of America. You, you hear the stories here from people who live in Jackson about, hey, we, the only thing we can use it for is showering and even that we’re having allergic reactions to this. We have stuff growing on us. I mean, this is totally unacceptable. I mean, the, the failure here just seems almost unfathomable. The fact that something like this, this is, should not be a political issue. This should not be something that, that causes any debate. This is just a matter of having basic human necessities met. Something has got to be done here. I mean, what, what can we do? What can we expect to have happen? How do we get this issue addressed?

Farron Cousins:                  What needs to happen is we have to improve the water infrastructure throughout the country. And this is something obviously with Flint, Michigan, you know, that put it in the forefront. Reuters report or AP report from a couple years ago said, hey, there’s actually 2000 water systems with more lead than Flint, Michigan. Now we have the failures in Mississippi. So this is across the board, you know, border to border, coast to coast, our water systems are not only failing, but poisoning people with lead and other contaminants.

Michael Bixby:                    I think it’s the vastness of the issue, which is exactly the important thing is if you’re talking about there’s, there’s as much as 2000 other locations that are as bad as Flint for issues like lead. I mean, we talk about PFAS on here all the time is, you know, there’s all sorts of chemicals that are in the water. And I think projecting forward, this has to be something we address because water supply is projected to be an issue over the next couple and several decades, is that it’s an issue of water. Right now we’re facing struggles overall. The infrastructure issue here and the human toll, I think that should be the focus because when you understand the suffering for the people who are being hit hardest by this, you reach the conclusion that we have to act. We have to act swiftly now in, in a coordinated manner, just as, as a nation. We have to make this problem be, go away. We have to fix it.