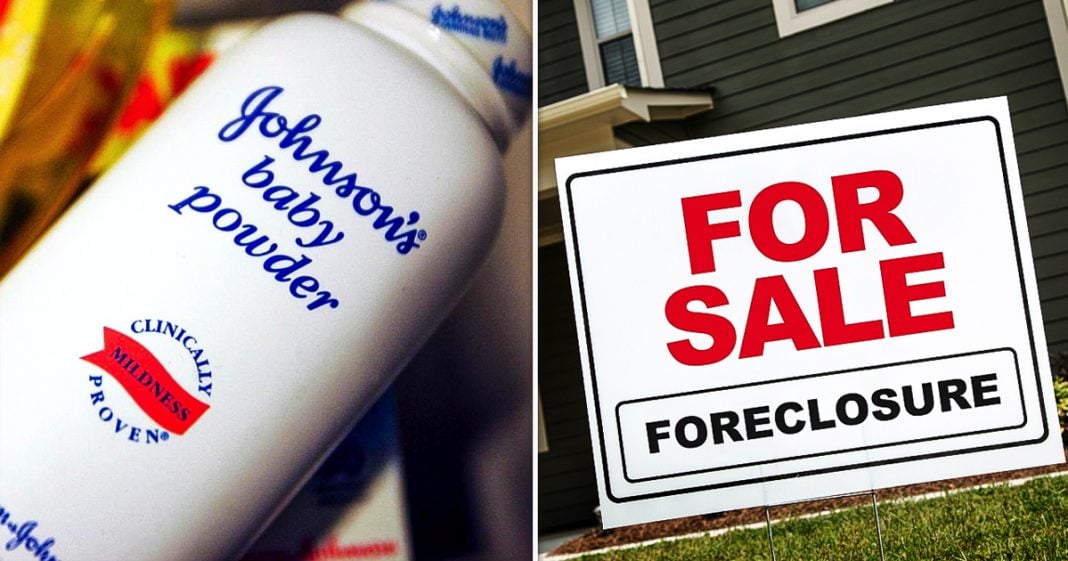 Court documents have revealed some of the most disgusting secrets that Johnson & Johnson has been hiding from the public for decades. Also, greedy Wall Street bankers are buying homes across the country and re-selling them at ridiculous markups, creating a housing bubble that could pop very soon Mike Papantonio & Farron Cousins discuss more.

Mike Papantonio:   Court documents have revealed some of the most disgusting secrets that Johnson and Johnson’s been hiding for decades. Almost, you just can’t make stories up like this. First of all, this is a company that’s a, is a criminal enterprise. There’s no question to my mind, I would call it a criminal enterprise. They’ve killed thousands of women with cervical cancer. They’ve known about it for 50 years. They knew the baby powder that they were using had the ability to shut down, well, it, they, they knew it was a carcinogen. They knew it had asbestos in it. They knew even the powder alone could cause physical injury, even without the asbestos. So women dying all over the country from cervical disease. Pick it up from there. This story, you almost could not make this up.

Farron Cousins:       This one, when I, when I first saw it, I had thought, okay, this, this isn’t real. This is, this is something out of a bad movie with an overexaggerated plot.

Farron Cousins:       But it really is not. And building off what you said, they knew that it was carcinogenic. That’s why in the 1970s, according to these new unsealed documents, they go to prisons and they say, hey, we need some inmates. So they get a bunch of inmates and they start injecting them with asbestos. They inject them with talc and, you know, they see if there’s differences here. Is, is the talc as bad as just straight asbestos injected into these mostly black inmates. And again, that’s something nobody’s gonna believe them if you tell that story, but this is in their documents.

Mike Papantonio:   You know what the ugliest part of it is, their support, their way to defend what they did. They injected asbestos into the body of 10 inmates, African American inmates, and their response was, you know what the response is, this is guy named Kligman, Kligman, you know, ran this whole deal. Kligman says, well, at the time, it was just appropriate. We were able to do it from the scientific community. That type of conduct was appropriate. Therefore, we don’t understand why you’re so upset. Literally, we don’t understand why you’re so upset.

Farron Cousins:       Right. And, and this is the kind of thing that of course would remain unknown to the public. One, of course if you’re watching corporate media, you don’t know this story, but two, if these lawsuits hadn’t come about. So it just makes you wonder, not you because you see this every day.

Farron Cousins:       But, but all these folks out there that are watching this and learning about this for the first time, this only got uncovered because they got sued. So think about all these companies out there that aren’t being sued. What are they hiding in their file cabinets? It’s more stuff like this.

Mike Papantonio:   What, what about these bonehead judges who are saying, we’re going to allow you to seal this. I mean, the judge sees it firsthand. The judge sees the criminal conduct from these CEOs firsthand and he says, you know what, we’re just gonna seal it up. We’re not gonna let anybody know about it. And when they do that, the people that are still using the product are at huge risk, because they don’t know how serious this is. I mean, we, we’ve got to change the mindset of these judges who believe that you, they’re gonna protect the corporation. We’re gonna seal this up to where nobody knows about it. This story, sealing up a story where the company goes out and injects a cancer causing element into the bodies of 10 African American prisoners because at the time it was scientifically appropriate.

Farron Cousins:       You’re still bankrupt. So you can avoid liability.

Mike Papantonio:   This is a 400 billion, $400 billion company that a New York judge who has never done anything for consumers, who’s always been on the other side of consumers. If you go to New York and you’re in bankruptcy court and you’re not a corporation, you’re dead in the water. This guy came up through the corporate system, never represented corporate, never represented consumers at all, always represented corporations. And he allows them to declare bankruptcy while women are dying by the hundreds all over this country because of the toxic product that Johnson and Johnson created.

Farron Cousins:      Well. And, and, and it, it, it’s so devastating because obviously the company’s not bankrupt. All that’s gonna do is reduce the amount that these families, the survivors are gonna be able to get and, and that’s just how this system is rigged in favor of these corporations.

Farron Cousins:       This is how the justice system in the US works. And if we don’t highlight it, people don’t understand how bad it really is.

Mike Papantonio:             Greedy Wall Street bankers well, they’re at it again. They’re buying up homes across the country and reselling them at ridiculous markups, creating a housing bubble and that bubble could pop anytime. Haven’t we seen this before.

Farron Cousins:                  Yeah. What we’re starting to see and it’s getting worse every financial quarter is the percentage of new homes being purchased by big banks, hedge fund investment firms, whatever they are, keeps increasing to the point where you’ve got some cities, you know, big cities, Florida and Las Vegas and Georgia and North Carolina, where 30% of the market is going to these big investment banks. JP Morgan just spent $45 million on an entire neighborhood over in Florida, they bought all the houses. They bought the whole development. And what they’re gonna do is they buy ’em for, you know, X amount of dollars. They multiply that times two and sell it back to people at the inflated price because they, they’ve cornered the market.

Mike Papantonio:             And in the process they have all of these tax benefits. They have regulatory benefits that for some reason we won’t change. It’s very easy to change these tax giveaways. That’s why they’re doing this. They’re doing it because as you point out, it’s a, it’s a double your money investment, but it’s triple your money when you add in the tax benefits that they get. The, the regulatory loopholes that they are forgiven. They’re forgiven if you go in and do this, it’s okay if you’re. You know, it got so crazy, they, they put together, most of these big banks put together these hit teams and the hit teams would go door to door in neighborhoods. They would call you on the phone. Can we buy your house? They would email you. They would write letters to you. We wanna buy your house. It was this massive influx of these hit, you know, these hit men that just wanted to buy up everything they could. Right?

Farron Cousins:                  For twice what you were paying in your mortgage, and this is a real crisis and, and Florida is actually statistically the worst in the country right now.

Mike Papantonio:             How does a young couple trying to start a life afford what’s out there right now? They can’t. And that’s, that’s part of, that’s part of what New Jersey realized.

Farron Cousins:                  Well, they’re gonna do what I had to do, which was you wait for the market to crash. We found a foreclosure in a nice neighborhood, snatched it up at the time. And that’s where we’re headed because eventually you’re gonna have all these homes that will not sell. So you’ve got a glut on the market and that’s when the crash comes.