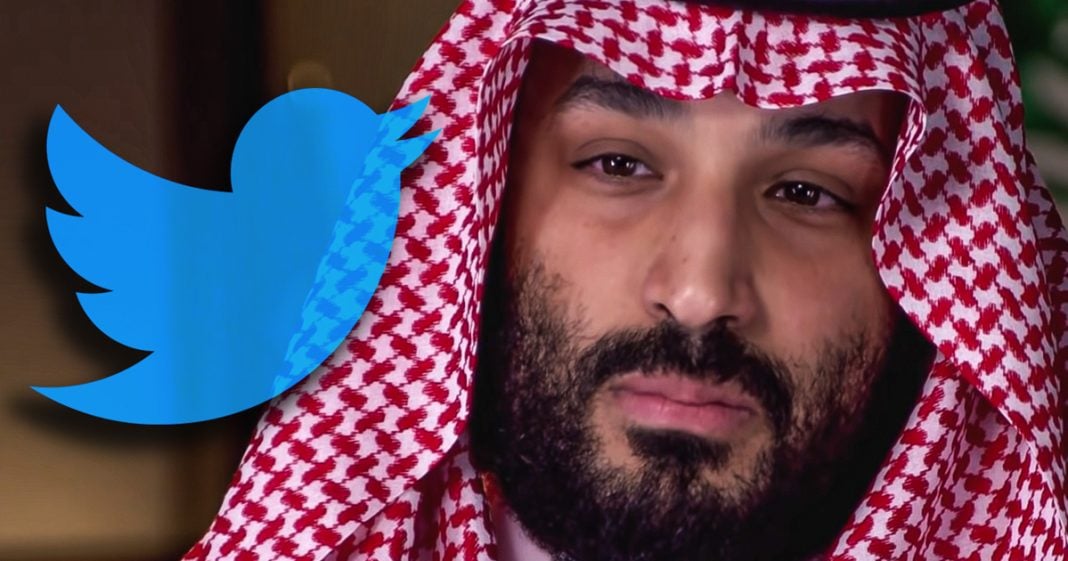 A Saudi Arabian woman has been sentenced to 45 years in jail for the crime of Tweeting critical statements about the Saudi Arabia government. Attorney Michael Bixby, filing in for Mike Papantonio this week, is joined by Farron Cousins to discuss more.

Farron Cousins:                  It, it’s terrorism. That is what Saudi Arabia has now classified these tweeters, as terrorist because it’s, under Saudi Arabia’s counterterrorism law and anti cyber crime law using the internet to tear the country’s social fabric. So they are effectively treating these people as if you are a domestic terrorist, because you got on the little bird app and said, man, things are pretty bad here. They just beheaded a hundred people in the stadium, basically for being political dissidents. And they say, okay, well look, we’re not gonna cut your head off and Pap and I, again, we, we talked about the story where they did behead over a hundred people recently. They said, okay, we’re just gonna put you in jail basically for the rest of your life. You sent out a tweet we didn’t like, you’re in jail for 45 years. Another woman recently in jail for I think 34 years.

Michael Bixby:                    For a retweet. I, I think that’s what the, that’s what I was reading is that it’s, and there’s still a lot of information that’s not known here, which is part of what’s frankly, even more scary because you hear about the situations that we do have the knowledge of. But somebody, somebody hits the retweet button. Can you imagine, I mean, think about how crazy this is, because you want to think about if this was applied in the United States of America, if we had this type of a law here and we’ve got plenty of things to criticize about what we have going on, there’s plenty of failures here. I mean, we, you know, 80, 90% of the country for tearing apart the social fabric. I mean, the law itself is basically it’s designed as, as a blank check for if we see somebody that we don’t like, if it’s a woman who’s speaking up about women’s rights in Saudi Arabia, if it’s somebody who is going against essentially the, the Royal family, the people who are connected, it’s like, we’re going to call that person out. We are gonna take care of them. And maybe if they’re lucky, they’re not gonna get beheaded, but they’re gonna go away for decades. I, I think it’s unconscionable.

Michael Bixby:                    I mean, I, I, I don’t think that’s a controversial statement for anybody who believes in any sort of any form of free, freedom, democracy at all. What this raises to me, the issue we, you and I have talked about before, Pap’s talked about as well is, you know, what are we doing with this country? Why are we still so cozy with a country that is actively doing this? That’s unrepentant in doing it and just absolutely frankly, destroying people’s lives over nothing.

Farron Cousins:                  Yeah. We, we get reports every single year when they do the, you know, worst human rights abusers, Saudi Arabia is always right at the top of that list in terms of violating their own citizens human rights and they have been for many, many, many years. And the United States, whether it’s a Democrat or Republican, it doesn’t matter. They look at that and they say, ah, they’ve got all that oil we want, oh, they buy a lot of weapons from us. They’re putting a lot of money in the economy. So we’re gonna look the other way when they’re killing people, when they’re bombing other countries or when they’re throwing somebody in jail for the rest of their life because they retweeted something that they didn’t like.

Michael Bixby:                    Or, or let’s, let’s take it a step further. When they’re supporting terrorism, we have, you know, Chris Paulos and our anti-terrorism team here at Levin Papantonio Rafferty, we, we are handling those cases that directly involve Saudi Arabia. I just, to me, it seems unacceptable that we would continue, continue to ignore that. Continue to cover our eyes, cover our ears because we want oil, because we want a little bit of money from, from selling weapons or something like that. I, I think we’re at a level where they’re involved or they’re directly responsible for, for terrorism against Americans, against troops, again, who are putting themselves out there in harm’s way. This just seems like something where it’s, it cons, it’s consistent. There’s a pattern just like in Russia.

Michael Bixby:                    It’s not a mistake. It’s not a one time freak accident, but this is the norm there. And, and, and we need to call it out. We need to recognize it and understand just how bad it is, because I think what we see is only the tip of the iceberg.

Michael Bixby:                    Well, Farron, thank you for joining me on the show today, it was great having you. That’s all for this week, but all these segments will be available in the coming week right here on this channel. And you can follow us on Twitter @AmericasLawyer. I’m Michael Bixby in for Mike Papantonio and this has been America’s Lawyer where we tell you the stories that the corporate media won’t tell you because their advertisers won’t allow them or their political connections won’t allow it. We’ll see you next time.